By MIKE BRENNAN
City of Bellevue

The index consisted of the number of tower cranes hovering above large construction sites across the city. It was an informal gauge of development activity — and economic health — in downtown Bellevue.

The crane tally topped out at 21 in 2007, the height of the last development cycle. Soon that number dwindled to zero, a direct result of the recession that hit the nation in 2008.

While the recovery from the recession has been slow, we are starting to see economic activity rise across the city and region. And with this we expect the crane index to rise as well. 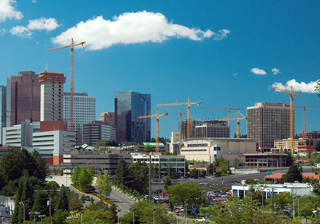 Photo courtesy of the city of Bellevue [enlarge]
Cranes dominate the downtown Bellevue skyline in this 2008 photograph.

Other crane-worthy projects are in the wings.

Interest is growing for big developments around the city, and particularly downtown where early permitting has increased. Like the last development cycle, current signs point toward a range of big downtown projects, including residential (mostly apartments), hotels and office buildings.

Some of these big projects include the Lincoln Square expansion, a large office-hotel-condominium-retail complex that will mirror the original Lincoln Square property nearby; a 376-room Marriott Hotel; and a new office tower on Northeast Eighth Street.

It’s pretty clear we’re not talking about if projects will come, but when.

Based on one set of numbers from 2012, it appears the development cycle may have turned already. The value of major projects in 2012, based on permits issued, more than quadrupled compared with 2011, rising from $46 million to $194 million. And, the total valuation (including major projects, new residential projects, commercial and residential remodels) citywide more than doubled, from $168 million in 2011 to $375 million in 2012.

In addition to downtown, we are seeing movement in other areas of the city. The Bel-Red Corridor, a 900-acre section northeast of downtown, is expected to be part of the next development cycle. Given that this area will connect to downtown Bellevue and Seattle by the future East Link light-rail line, it provides another opportunity for higher-density development.

We don’t expect the next development cycle to be as dramatic and short as the last one, which ramped up in 2005, peaked in 2007, and bottomed out in 2011 (tracked by total valuation based on permits issued). But when the cranes do return, we’ll be ready, keeping a close eye on the city resources so we can respond appropriately to growth.

Bellevue employees are dedicated to provide great service to our residents, business owners and visitors. Together, we’re building Bellevue’s future.

Mike Brennan is the city of Bellevue’s director of development services.