As urban growth continues across the Puget Sound region, Bellevue is poised for a commercial and residential boom. By 2030, the downtown population is expected to nearly double to 19,000, and the number of jobs is anticipated to increase about 60 percent to more than 70,000.

While services and retail are currently the largest employment sectors, future growth will be fueled by a thriving high-tech sector centered on digital media, information technology and engineering.

But Bellevue is more than a regional economic engine; it’s increasingly a global city as well. This is reflected in its demographics — more than a third of Bellevue residents are immigrants according the 2010 census figures — as well as expanding trade with Asia and Europe.

Headquartered in Bellevue, MulvannyG2 Architecture has grown up with the city. The firm has four other offices, including one in Shanghai, so we have been involved with urban growth in cities of all sizes globally for more than 40 years. It’s from this perspective that we offer some insights and suggestions for Bellevue’s next major building cycle. 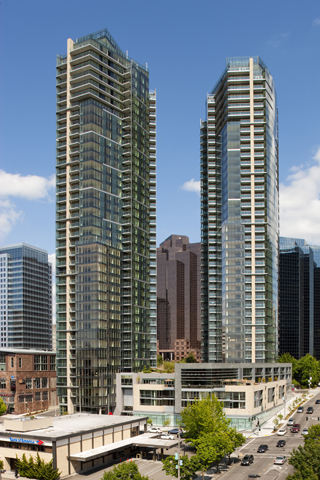 Photo by Lara Swimmer [enlarge]
Bellevue Towers, finished in 2009, has 539 condos in two downtown towers. It was designed by MulvannyG2 Architecture and GBD Architects.

Livability and good business go hand in hand. The challenge for downtown Bellevue is encouraging economic growth and development while increasing livability. Rising to this challenge, the city recently launched the Downtown Livability Initiative, which brings together city leaders, residents and design professionals to discuss downtown land use and zoning controls, as well as how to make Bellevue a better place to live and work.

This is an excellent start. According to the city’s time line, proposed changes to the land use and zoning code will occur later this year, with adoption sometime in 2014. The future is now.

This planning must consider the full spectrum of residents. The downtown population has grown more than 175 percent since 2000. It’s also getting younger, with a median age of 38. So, looking at schools in the CBD now would be a progressive step. It could also serve as a magnet for more young families moving in.

Many seniors are also moving, or choosing to remain, downtown, so steps should be taken with this group as well.

The choices the city makes in the near future will impact its downtown business district, and the entire region, for the next generation and beyond, so this is an ideal time for this formal review of major development and zoning issues. Below are some specific suggestions and clarifications that could help attract investors and companies during the next building cycle.

• Livability versus business. These are often viewed as opposing forces, but they shouldn’t be. Bellevue is still in its formative years, and this is an ideal time to achieve a balanced approach. Greater livability supports rather than undermines a healthy business atmosphere. This includes connecting Downtown Park and other open spaces with a user-friendly pedestrian system, more amenities along the pedestrian walkways, and a well-connected transportation network that includes mass transit, cars and parking places, and bicycle access.

• Growth of downtown zones. Bellevue is bounded by low-rise residential zones on the north, south and west. The east side of Interstate 405 is ready for increased density and should be evaluated along with the rest of the downtown. Linking both sides with a pedestrian boulevard that is separate from the current and planned auto overpasses should be considered.

The downtown Sound Transit station is planned for the north edge of the City Hall campus block. Substantial reconstruction of the real estate between the station hugging Northeast Sixth Street and City Hall will be required. This could be the ideal launching point for a pedestrian connection to the “auto row” side of I-405, an extension of the existing major pedestrian corridor and transit mall.

• Super block development. The intended goals of the required pedestrian mid-block connections are valid. But due to little or no development on some blocks, the benefits are only now starting to be seen. Every block has different physical circumstances that can determine if the east-west connection should be required for both foot traffic and vehicles. Other options for accommodating cars and trucks within the super blocks should be considered.

• Circle of life. The Ashwood area of Bellevue has a concentration of senior living facilities, with more being planned nearby. Downtown is also home to about 400 school-age children, with numbers expected to rise as young families move in.

The 2013 Livability Initiative should consider both groups. Two ideas: first, local companies could work with the school district to develop teaching and mentoring opportunities with a “high-tech” elementary and/or high school. Second, for seniors, a coordinated shuttle service that provides CBD transportation services could work well with Bellevue’s compact downtown and rigid street grid. Car-less millennials may want to hitch a ride, too.

• Floor plate sizes. Market demands, primarily from high-tech companies, call for larger office floor plates than currently allowed. We propose that properties flanking both sides of I-405 be allowed 30,000-to-35,000-square-foot floors, and up to 120 feet in height. This could be Bellevue’s “technology corridor.”

• Parking. Reduce the minimum parking requirements. Bellevue’s ratios are higher than comparable cities and have been a deterrent to development. In addition to the planned mass transit improvements over the next 15 years, statistics show fewer young adults (millennials in their 20s) own automobiles today compared to previous generations.

• Amenity bonus system. The current amenity bonus system needs to be revised. Some categories receive too many bonus “points”; others too few. There will always be a pay-to-play component to urban development, but there is room for improving the win-win chances for everyone.

• Ground level development. The sidewalk level at the southeast corner of Bellevue Way and Northeast Eighth is a prime example of an unconventional Bellevue sidewalk development. Born from the stop-and-start history of Lincoln Square, the sidewalk elevation is a couple feet higher than the adjacent Bellevue Way road level.

The change in elevation is handled with a beautifully landscaped transition between the intensity of the auto traffic near the intersection and foot traffic next to the retail shops. There is little chance that this would have been approved during a typical right-of-way review process.

This is a micro-example of how Bellevue could allow for ideas, especially at the pedestrian level, which have not yet been ordained in zoning. The Bellevue Planning Department should be granted more administrative authority to accept such ideas.

Downtown Bellevue is brimming with potential. With careful and considered planning, and some targeted zoning and land-use changes, the coming boom could enjoy a long echo.

Ming Zhang, AIA, LEEP AP, is president and Scott Douglas is principal at MulvannyG2 Architecture. Zhang has more than 25 years of architectural design and urban planning experience. Douglas has more than 30 years of experience with a wide range of projects, and is a member of the Bellevue Downtown Association.