It's taken a lot of hard work to get the Point Ruston project to this point.

The 97-acre site along the Tacoma waterfront was an Asarco copper smelting plant for almost a century before MC Construction Consultants bought it in 2006. Millions were spent on cleanups before any redevelopment could happen.

A tunnel along the main road, Ruston Way, made access difficult and had to be removed. Then, just as work started to gain momentum, the recession hit and everything slowed down.

Even when things were rolling MC Construction had to work with two cities — Tacoma and Ruston — on permits, an arrangement that has had its ups and downs.

So many ups and downs would give any developer pause. But MC Construction stuck with it and now is beginning to see the fruits of all that labor.

“A mile of waterfront in an urban setting is nearly unheard of,” said Loren Cohen, manager of legal affairs for MC. 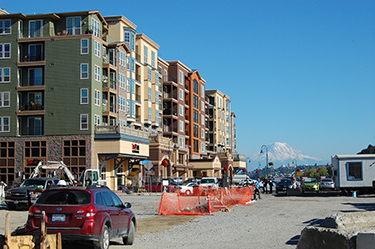 Point Ruston LLC, an entity related to MC Construction, is nearly done with part of the second phase of Point Ruston. This phase includes the Century Building with a nine-screen movie theater topped by 95 apartments and 40 condos, the 180-room Silver Cloud Inn, a grocery, six restaurants, and a central parking garage with 1,100 spaces topped by 100,000 square feet of retail and 115 housing units.

The movie theater with apartments and condos will open in a few weeks. Some restaurants are done already, and the hotel is under construction. The garage is set to open around the same time as the theater. Retail and housing above that will open about a year from now.

About 85% of the apartments have been preleased, and all but six condos in the Century Building have sold, Cohen said.

The first phase of Point Ruston had 173 apartments and 44 condos. The condos sold out and the apartments are usually full, said Chris Murphy, director of business development for Point Ruston. Rents range from $1,100 to $3,300 a month.

Cost for the first two phases is about $325 million, Cohen said, and the value of the entire project could top $1 billion.

Cohen said each building is designed and permitted separately and must make sense financially on its own, though they are all part of an overarching plan.

The Cohen family, which founded MC Construction, and the Thomsen family, which operates timber companies in Thurston County, own Point Ruston. A number of financial institutions have lent about 60 to 70 percent of project costs, including Bank of America, Wells Fargo, GE Capital and Bank of the Ozarks. 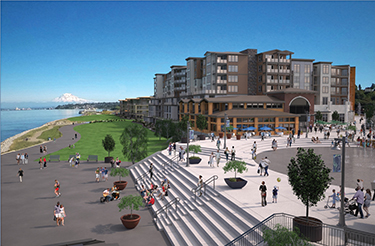 space. Courtesy Point Ruston LLC [enlarge]
A building with a movie theater topped by condos and apartments will be done in a few weeks. Point Ruston eventually could house 3,000 people, with 2 million square feet of shopping, entertainment and recreation

Cohen said MC Construction is working with an EB-5 center from Portland to raise about $66 million for retail and housing in the second phase.

As the project has progressed, MC has shifted more toward condos. The first phase had about a four-to-one ratio of apartments to condos. Condo prices started around $550,000, and units sold for an average of $850,000, Cohen said, way above typical prices in Tacoma.

Condos in the Century complex start in the mid $400,000s. Cohen expects about half the units above the garage and retail will be condos, starting in the $300,000s. One residential building in for permits for the third phase could have about 90 condos and 70 apartments. Condo prices could start in the $300,000s, Cohen said.

Customization is a big part of Point Ruston. MC Construction's founder Mike Cohen has background in custom homebuilding and wanted to bring that to this project. Condo buyers can pick cabinet colors, appliances and other features. More significant changes like moving a wall or combining multiple units are also possible.

MC can customize units because it does most design and construction in-house. The most difficult part is that each change needs to be communicated clearly to all subcontractors.

“Having design in-house and general contracting in-house through companies we control gives us the ability to look at each opportunity as a custom opportunity that we can put our own stamp on,” Cohen said.

“If we had ignored that people come down to the waterfront in Tacoma for recreation, we would have been dead on arrival, and the project would have failed from the get-go,” Cohen said.

Once people come to the area, they need a reason to stay. Murphy said he would like to see Point Ruston's retail be like University Village in Seattle or Bridgeport Village outside of Portland, where people can shop, eat, see a movie or go for a walk.

A large public plaza with a fountain will provide a gathering place, Murphy said. In the winter it could be a skating rink.

“We are creating an atmosphere that encourages people to stay for hours,” Murphy said.

The location is one of the biggest draws — and also one of the biggest challenges. The site sits on the line between Tacoma and Ruston. Tacoma is viewed as much more development-friendly than Ruston, which has more prescriptive rules. Buildings on the Tacoma side can be twice as tall as on the Ruston side: eight stories versus four.

Both cities have reasons to encourage the project. It's helping Tacoma clean up its image as a polluted, industrial city, and it means a big boost in tax revenue for Ruston, a city with fewer than 800 people.

At one point, the developer tried to get the land annexed to Tacoma because of a conflict over permits with Ruston.

But recently things have been moving in the right direction for Point Ruston's relationship with both cities. Tacoma and Ruston announced they are working on an interlocal agreement to help speed up permitting for the project. Under the proposed agreement, Tacoma would process all permits, and conflicts would resolved through meetings between Tacoma and Ruston officials.

“It's a one-stop shop for permitting for us, rather than having to go through two bodies, which we think would be a great efficiency,” Cohen said,