Real Estate Buzz: Another Bosa brother has his eye on Seattle

A developer named Robert Bosa seems to be teeing up a big project in Seattle.

If that names sounds familiar, you are probably thinking of Nat Bosa, whose company Bosa Development is already building the Insignia condo towers in the Denny Triangle near Amazon. It's Nat's brother Robert who has plans for a pentagonal site at 2014 Fairview Ave. Robert has his own company called Bosa Properties.

Early permitting documents show Bosa Properties is contemplating a residential tower with 450 units and 370 parking spaces. The total square footage would be 420,000 square feet, but the documents don't say how tall. 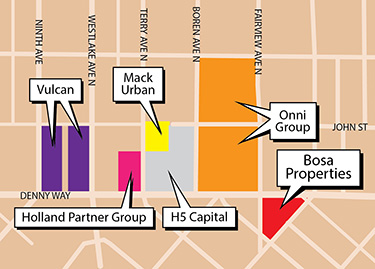 Bosa Properties may build 450 housing units at 2014 Fairview Ave. More than 4,100 units are already in the works along Denny Way.

It is unclear if Robert Bosa is planning condos or apartments. Bosa Properties is based in Vancouver, B.C., and mostly has built condos there, but it also has rental properties.

Bosa offers a program called BosaEquity that helps renters become homeowners: 15 percent of tenants' monthly rent goes into a credit account that can be used toward a down payment on one of the company's condos.

Bosa Properties representatives did not return calls requesting comment. ZGF Cotter Architects was listed on project documents, but the firm referred questions back to Bosa Properties.

Bosa's Fairview project would have a lot of company. The site is along a four-block stretch of Denny Way where more than 4,100 other residential units already are in the works.

• The DJC reported last week that H5 Capital is planning two 42-story towers with 840 units at 121 Boren Ave. N. on the block west of Onni's project.

• Mack Urban wants to build 420 units in a 40-story tower on the same block as H5's project, directly north and west of the H5 site.

• On the next block to the west, Vulcan Real Estate is planning an 18-story, 400,000-square-foot office tower and a 28,000-square-foot commercial structure at 111 Westlake Ave. N. Those buildings would share the block with another new Vulcan project: a 41-story tower with 470 units and a 7,000-square-foot retail building at 110 Ninth Ave. N.

Most of these units are expected to be apartments, so if Bosa decides to build condos he wouldn't have direct competition.

The Bosas have a long history in the Vancouver area. Robert, Nat and their six brothers came to British Columbia from Italy in the 1950s, according to news reports, and started out building houses together as Bosa Brothers Construction.

Dean Jones, principal and owner of Realogics Sotheby's International Realty, grew up in Vancouver and said the Bosas are one of Canada's most prolific and respected real estate families.

Nat Bosa's company, Bosa Development, has done projects in a number of U.S. cities including San Diego, San Francisco and Seattle. But Bosa Properties' website shows it hasn't strayed far from Vancouver with residential projects. It also has office, retail and industrial properties in Vancouver and other parts of western Canada.

So why is Bosa Properties now deciding to venture into Seattle? The firm may be drawn toward the hot Puget Sound market, or trying to diversify beyond the Canadian market — where there's been talk of a housing bubble about to burst.

Both Nat and Robert Bosa have their own construction companies, which helps make projects feasible when they might not be for others, Jones said. Nat Bosa's construction division is building Insignia in Seattle.

“(The Bosas) prefer to be on the front end of a market cycle because they have the resources to build what others won't,” Jones said.

Jones noted that almost all of the condos being built in Seattle now are backed by foreign money. Luma is a 24-story condo tower under construction on First Hill with money from the Swedish pension fund Alecta. Several other condo projects here have Chinese money behind them. Jones said foreign investors can be more comfortable with risk than U.S. investors. In the condo boom prior to the recession, Jones said, condo builders would use mezzanine financing from Wall Street and then get a construction loan for the rest, but that financing model never returned after the recession.

And with rents and values so high, apartments are the safer and smarter investment right now.

“In order for condos to make more sense, you would have to achieve an even higher value. Not just matching the value of apartments, but exceeding them,” Jones said.

King County's Department of Assessments has started mailing out property valuation notices for 2015, and values keep going up.

The assessor said 85 of 86 residential areas in the county saw higher values last year and that is expected to continue.

So far 51 of the 86 residential areas have been evaluated this year, and the only zone with lower property values is around Duvall, according to an interactive map created by the assessor's office called LocalScape. Most of the Seattle neighborhoods evaluated so far have seen double digit increases in values this year.

The assessor reports that property taxes increased overall by 4.11 percent for 2015, though taxes on individual properties vary depending on the location.

Values are determined by recent sales of comparable properties in the same area.

Most neighborhoods have either rebounded or exceeded their pre-recession values, the assessor's office said.

Valuation notices this year include a QR code that allows owners to scan it with their phones. The code will take them to the assessor's eReal Property database where they can pull up property information online.

The first set of valuation postcards have been mailed out, and mailings will continue through October.

Need help on property tax related matters, including appeals? Contact the King County Tax Advisor at (206) 477-1060 or by email at taxadvisor@kingcounty.gov.