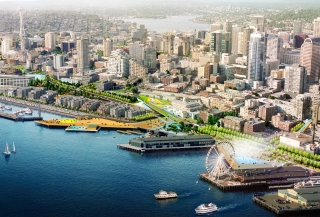 Image courtesy of the city of Seattle and James Corner Field Operations [enlarge]
The “overlook fold” is part of the plan to connect Pike Place Market with the waterfront. The broad, landscaped walkway would be near Marketplace I and II, which sold last week for $71 million, $12 million less than BlackRock paid in 2007.

Last week BlackRock sold Marketplace I and II near Pike Place Market to an entity related to Morgan Stanley for $71 million — and took a big loss.