Real Estate Buzz: Why are developers starting all those towers in Bellevue? A ‘blind-faith leap'

The long wait for building new office space in downtown Bellevue is over.

Trammell Crow and Kemper Development have just started office towers, and Schnitzer West wants to start in December. Those three projects will have about 1.5 million square feet of space, which should be done in 2015 or 2016.

So will all this space fill up?

Microsoft may not go on another leasing spree like it did a few years ago, and many companies in downtown Bellevue are young, which means they look at the short term — like next year — rather than five or 10 years out. That young tenant base is one reason why many of these developers are starting construction without any preleases, according to experts on a panel at Wednesday's NAIOP meeting. 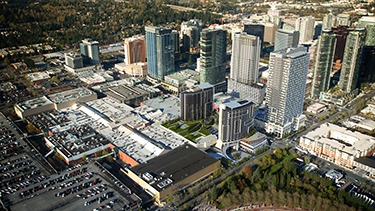 Images courtesy of Kemper Development Co. [enlarge]
The two expansions will cost $1.2 billion and add about 2 million square feet to the Bellevue Collection.

“It's a blind-faith leap by all these landlords to put this space out there,” said Paul Sweeney, principal at Broderick Group. “We think it's going to get leased, but we don't know who.”

Sweeney said he thinks the two projects under construction and Schnitzer West's building are the most likely to succeed. Everything else raises questions: Will tenants move to the Spring District before light rail gets there in the 2020s? Will Ivanhoe Cambridge build without a significant preleasing? Will Beacon sell its office project?

The other projects also are further behind in the permitting process.

Chris Hughes of Jones Lang LaSalle said there are tenants in this market looking for about 1.3 million square feet, but some of them could be looking in Bellevue and Seattle.

Microsoft has been the big player on the Eastside for years. According to data from the NAIOP panel, Microsoft leases or owns 14.5 million square feet, which is about 30 percent of all Eastside office space.

Hughes said Microsoft and companies it has spun off like Expedia accounted for between 80 and 90 percent of space leased in the last development cycle. That probably won't be the case this time around.

Hughes said some small financial and professional services companies are starting to look for space. Many of the deals he has done are less than 50,000 square feet.

“The growth — although it may not be the one million-square-foot tenant — is going to happen in chunks,” Hughes said.

One reason for that is because tenants looking for big spaces don't have anywhere to go. Sweeney said there isn't a single space over 100,000 square feet available in downtown Bellevue.

Rents in the best buildings are around $36 to $38 net. These numbers, and the lack of available space, justify new construction, Sweeney said. The vacancy rate is 8.5 percent throughout the Eastside, according to data from NAIOP.

“I think right now landlords can charge whatever rents they want if they have a best-in-class space, and tenants will take it because they need to,” Sweeney said.

But once those new buildings open, it's anybody's guess as to what will happen.

“I think there's a very good chance Microsoft won't be there for us in this cycle, and then we are depending on some very young, immature companies to suddenly explode in their growth,” Sweeney said. “If they don't explode, then I think tenants are really going to control the market on the Eastside.”

There is a lot of growth on the Eastside, so if Microsoft is less active that may not hurt as much. Google has a big presence in Kirkland, and many other companies involved in cloud computing, e-commerce, gaming and other industries have offices on the Eastside.

Brian Hayden, a principal at Flinn Ferguson, said Boeing has leased more than 600,000 square feet on the Eastside in recent months. Boeing has taken space in Bothell and more than 200,000 square feet along the Interstate 90 corridor. That will lower the I-90 vacancy rate from nearly 20 percent down to a healthier number, Hayden said.

South Lake Union and Pioneer Square have been Seattle's hottest office spots recently, but Jesse Ottele of CBRE said downtown is seeing some office interest once again after a lull. Property owners are renovating buildings to add amenities and compete with newer spaces.

“We're starting to see tenants creeping back into the south CBD,” Ottele said. “There's been pretty tremendous activity in leasing over the last 12 months, where (before) it was really just dead.”

An eHarmony approach to GSA leasing

Seattle-area property owners and brokers can now offer space for lease to the federal government through a new online program released by the U.S. General Services Administration.

It is called the Automated Advanced Acquisition Program and GSA's Stephanie Kenitzer describes it as “eHarmony between property managers, owners and the GSA.” She says it will save taxpayers money by making the federal leasing process more efficient.

“Automating the procurement system for many of GSA leases will speed up our delivery process and provide world-class work space for our customers at highly competitive prices, ultimately delivering savings to taxpayers,” GSA Regional Administrator George Northcroft said in a statement.

The AAAP covers King, Pierce and Snohomish counties, and allows GSA to gather a database of lease offers.

Offers can be submitted from the first to the seventh of each month. Property owners and managers can enter information about available spaces, and when GSA needs to find offices for a government agency it can search the database for potential matches.

Offers are ranked based on factors such as base rent, operating costs, interest on tenant improvements, construction markups and free rent.