Eight short-listed developers are vying to develop these sites near Sound Transit's Capitol Hill light rail station. The developers came together for a forum on Monday and talked about their desire to create something the neighborhood will be proud of, with retail, affordable housing and community gathering spaces.

More than 250 people packed the Broadway Performance Hall to listen, and more joined the conversation on Twitter using #CapHillStation to talk about everything from what kind of retail makes sense to which panelist had the best biceps. 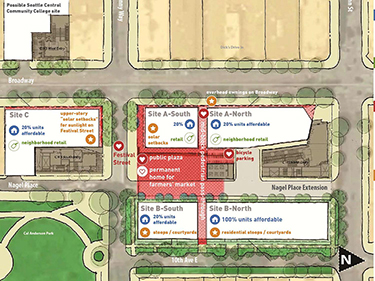 [enlarge]
Sound Transit has put some requirements on the sites, including affordable housing and a public plaza. Neighborhood groups want retail diversity and a home for the Broadway Farmers Market.

A minimum of 397 apartments could be built on the four sites, which are on or near Broadway, between East John Street and Seattle Central College. At least 36 percent of the units must be reserved for lower income people.

Construction won't begin until after the station is complete in 2016. Proposals are due in September, and Sound Transit said it wants to name the winners in October.

Each site has specific requirements. Some must be mixed-use, others must be below-market-rate housing and others must participate in the city's Multifamily Property Tax Exemption program.

Champion representatives said they want the public plaza Sound Transit is requiring to include space for Broadway Farmers Market. They also want a community center and retail diversity. Cathy Hillenbrand of Capitol Hill Champion said Broadway's retail scene has been “missing its two front teeth” during the station construction. Hillenbrand said all the new retail in the neighborhood is either restaurants, bars, banks or gyms, and residents would like more variety.

Sound Transit's rules prevented the developers from talking about their specific plans. So the developers focused on their experience and how they see the neighborhood, and they also asked the crowd questions about community engagement, design and parking. John Marasco of Security Properties described the event as a “speed date with the Capitol Hill community.”

Local developers talked about how their past projects improved the community. National developers mostly steered away from out-of-town efforts and focused on their work in Seattle. Several of the national firms have either added local firms to their teams or have key personnel living on Capitol Hill.

“We want to see that as (the project) moves forward, the DNA of Capitol Hill and the qualities that make it special to all of us are preserved,” said Peter Wolff of The Wolff Co., which wants to develop Site A and the public plaza.

The Wolff Co. has opened one Capitol Hill apartment project and is building another. Peter Wolff said having different developers for the parcels, or “layering diverse hands,” will make the neighborhood better.

Security Properties has projects in Fremont and Columbia City that are near local farmers markets.

Marasco said Site A, which runs along Broadway, “has the potential to be Capitol Hill's most important plaza,” he said. “Everyone will come here.”

Gerding Edlen's Jill Sherman said the results will be better if the sites are viewed “holistically.” That way, opportunities won't be missed like shared parking or amenities for all residents to use.

Sherman said the biggest challenge will be financing. Affordability is a high priority for Sound Transit, and whoever develops the parcels must be creative with financing.

David Dologite of Capitol Hill Housing also talked about financing and said his organization has experience with creative financing and partnerships. With Broadway Crossing, Capitol Hill Housing came to an agreement with Walgreens to change its plan for a one-story store at East Pine and Broadway into a five-story low-income housing project with Walgreens on the ground floor.

Capitol Hill Housing wants to develop low income housing on Site B North, and is also on a team with Jonathan Rose Cos.

Jonathan Rose's Kristin Ryan said these new developments will transform the neighborhood. She said Jonathan Rose made its name working on key projects like schools, parks and low-income housing projects that are the centerpiece of neighborhoods.

Jonathan Rose wants to develop all four parcels because it is “an opportunity to inspire all who work and live here,” Ryan said.