Skanska likes to do things a little differently.

The Swedish firm's Seattle projects stand out for a number of reasons such as bold design, interesting retail and a deep commitment to sustainability. Skanska can do this because it typically self-funds its projects.

“We use 100 percent equity, so we maximize the control and our ability to dream, create and innovate on projects that benefit our community and our marketplace, namely tenants,” Lisa Picard, executive vice president and regional manager of Skanska USA Commercial Development, told the Buzz in an email.

Skanska recently sold a 90 percent stake in its South Lake Union complex called 400 Fairview to TIAA-CREF for about $235 million. That places the value of the building at about $261 million.

Picard said Skanska held onto a piece because it believes 400 Fairview's value will increase, and the company wants to be a part of that. 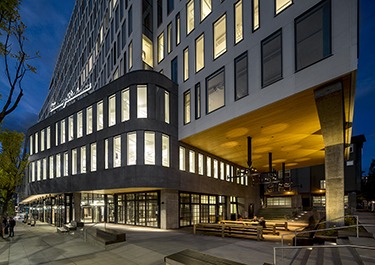 Courtesy Magda Biernat-Webster [enlarge]
Skanska USA Commercial Development said it has learned spaces like The Hall at 400 Fairview add value because they help tenants to attract and retain employees.

The 13-story office building is at 400 Fairview Ave. N. and opened last fall. Tommy Bahama anchors the 337,000-square-foot building. Other tenants are Impinj, Cartoys and Wireless Advocates. The space is about 70 percent leased and Picard said Skanska is working on leases with three other tenants. When those are done, only one floor will be available.

Picard said selling off a stake is similar to what most developers do — find an equity partner before construction — except in reverse.

A defining feature in 400 Fairview is the ground-floor streetside market called The Hall, which is full of small, flexible retail spaces. Picard said having the right kind of tenants in The Hall is more important to Skanska than getting maximum revenue. Spaces like The Hall, and a rooftop deck with a restaurant, add value because they help tenants attract and retain employees.

Skanska's next project is 2&U at 1201 Second Ave. It is in design review now, Picard said, and Skanska hopes to get the entitlements done by early to mid 2016.

The 38-story 2&U tower will have about 700,000 square feet of office space and 22,000 square feet of retail. Early plans call for the office portion to sit six to eight stories above the ground to create space below for a “small-scaled urban village” with open areas and retail, Picard said.

Features like this don't come cheap for Skanska or future tenants, but Skanska has learned from 400 Fairview that tenants competing for employees want stand-out buildings.

“Today's communities and tenants are really demanding better real estate to do great work,” Picard said. “They want to feel that the workplace is like a neighborhood and has all the great amenities and feelings of where we live. We will continue to make places that feel good. And fundamentally we learned that when you care enough to make your projects good, people pay to be there.”

Portland-based Provenance Hotels already has several hotels in the Northwest and others around the country, but the firm is thinking bigger.

Last week Provenance said it has started a $525 million fund to buy and renovate hotels around the country. Some of that money has already been raised and spent, and some will be raised in the future.

Provenance's first move was to buy out partnerships in seven of the nine hotels it manages: Hotel Max in Seattle; Hotel Murano in Tacoma; The Westin Portland, Hotel deLuxe, Hotel Lucia and Sentinel in Portland; and Hotel Preston in Nashville.

Provenance would not say how much it spent on these transactions.

The rest of the fund will go toward buying and developing hotels in the top 25 U.S. markets. Provenance said it will consider renovations, ground-up development and rebranding. It also is open to taking full or partial ownership of a deal.

“Raising capital will be increasingly competitive as this economic cycle churns onward,” Gordon Sondland, chairman and CEO of Provenance, said in a statement. “Launching our first fund now prepares us to take advantage of the opportunities for investment that we anticipate will present themselves.”