Real Estate Buzz: Are we facing a hipster housing bubble?

We're No. 1! Portland data/marketing firm Infogroup recently released a study rating Seattle as the most hipster-ridden city in the U.S. Even more surprising? We beat archrival Portland, which stumbled in at a shameful No. 2.

Meanwhile both cities are experiencing an unprecedented boom in urban apartments, many being marketed to the unmarried millennial demo.

Could we be facing a potential hipster housing bubble in the rental market? And are we yet at peak hipster? What does the term even mean? The label is endlessly elastic and controversial, but for present purposes let's stipulate that hipsters are indie-minded millennials, unmarried, urban-focused, tech-savvy, averse to corporate brands and marketing, and interested in all things authentic, local, organic and artisanal. Not the readers of this column, in other words, but the folks who buy and lease from you. 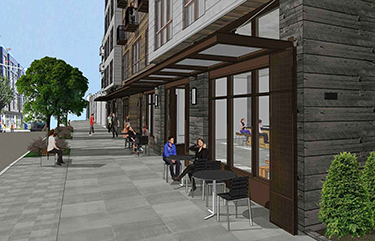 Image courtesy Mill Creek Residential [enlarge]
Where are the hipsters? Maybe in the new Modera apartments on Capitol Hill.

Do such bazillionaires even exist? Do hipsters?

“It makes me laugh,” says Liz Dunn, whose Dunn + Hobbes (Chophouse Row, Melrose Market) knows a thing or two about trendiness and cool. “Because they've kind of completely stereotyped the consumers of those kind of goods and services.”

Yet she doesn't entirely dismiss the Infogroup study or that hipster marketing hype. “Here's the grain of truth that I actually like,” she says. “There is an appreciation for local indie businesses that have a better product offering than national chains. I am a champion of small, local, indie businesses... because they actually have a much higher economic multiplier effect than chains, particularly national chains. That has to do with the fact that profits from those businesses get reinvested in their own cities.”

So can the Infogroup paradigm be applied off Capitol Hill and down in Amazonland? “No!,” she laughs. Rents in SLU, she says, “are just priced too high” for hipster-friendly shops and businesses.

What she sees instead, particularly with some national developers and retailers, is often disingenuous marketing: “A corporate business trying to pretend it's homegrown and local — that's the worst.” 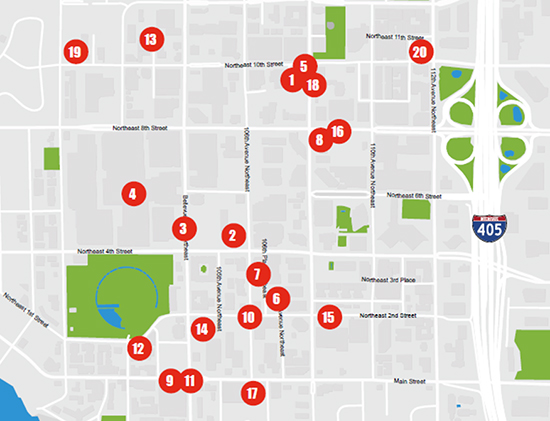 Sky is not falling in Bellevue

“People are starting to live there,” Bobby Shanahan says about downtown Bellevue, “but it doesn't have those cool bars yet. It doesn't have character yet.”

Shanahan works at Colliers as its senior research associate. He and Mark Anderson, a senior vice president at Colliers, just finished three months of research and complied a report called “The Future of Downtown Bellevue,” which seeks to rebut the sky-is-falling response that some have had to the expected 2019 departure of Expedia, with its 3,000-plus employees, for Seattle.

In an exclusive preview of their findings to the DJC, they argue that Bellevue's central business district (or CDB) is doing just fine.

Projecting through 2020, the authors count 20 major hotel, office, multifamily and retail projects. All are new, planned or in the permit process, though there's no guarantee that all will reach completion. Kemper Freeman's Lincoln Square II is the largest example, but Anderson and Shanahan aren't just counting office vacancy rates.

Rather, says Anderson, their goal is to present the big picture of Bellevue's economic health by factoring in population and job growth. Thus, he argues, if a few big tenants like Expedia leave or Microsoft shifts more workers to Redmond, smaller tenants will flow in to take their place. (See this week's lease by Valve of nine floors in Lincoln Square).

Significantly, of the 20 projects Shanahan and Anderson cite, 16 have a residential component, which speaks to downtown Bellevue's rapid population growth. They project Bellevue's population will grow almost 60 percent over the next five years. That rate far exceeds their other metrics, where office jobs go up 22 percent and retail jobs rise 30 percent.

Their report also examines a slowdown scenario if a few of those proposed projects don't get built. In that scenario, population still grows 26 percent, office jobs 3 percent and retail 16 percent. Even there, housing is the biggest driver, with retail tied to that.

And when the light-rail station opens in 2023, downtown Bellevue will become even more attractive to residents — and developers — embracing more density and eschewing cars. (Sorry, Kemper! But you benefit either way.)

A good example, though outside Bellevue's CDB, is the planned 2020 relocation of REI's roughly 1,200 employees from Kent to Wright Runstad's Spring District, east of SR 405. It's the same return-from-the-office-park phenomenon we see with Weyerhaeuser coming to Pioneer Square, also driven by the desire for transit, density and street life.

Looking beyond 2020, Bellevue's CBD has one significant advantage over Seattle's: more vacant land, or land with cheap old retail on it. “Everything's being torn down and rebuilt,” says Anderson.

And for developers wondering what's the ideal retail tenant? Infogroup's answer, whether in increasingly walkable Bellevue or on Capitol Hill, would be an indie coffee shop, specializing in organic beans, that also sells hoodies and music on vinyl. With free Wi-Fi, obviously.