On the Block: Why in this frothy real estate market is the price for Tukwila Commerce Center falling? 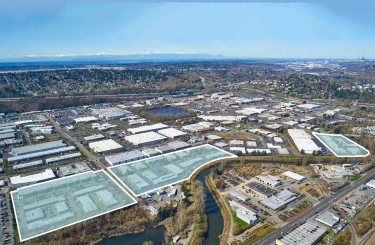 Photo courtesy CBRE [enlarge]
There are 27 buildings and 476,765 rentable square feet in the complex.

So that made me curious about Tukwila Commerce Center. The property is three adjacent parcels just west of the Green River, close to Southcenter Mall and the Interstate 5/SR-405 interchange. It is centered around 601-699 Strander Blvd., and was developed in stages in the 1970s into office, warehouse and industrial spaces. There are 27 buildings and 476,765 rentable square feet, according CBRE, whose Brett Hartzell brokered the sale.

Tukwila Commerce Center is 83 percent leased, according to CBRE, and the land could potentially be rezoned for commercial, retail or multifamily.

Right now, however, the mystery is why GLP sold for 20 percent less than the $52.7 million it paid in 2015 when it bought the property from an LLC once associated with Walton Street Capital.

And here's another mystery: Why did that old Walton LLC sell for 25 percent less than the $70 million it paid in 2007 when it bought the land from CalWest Industrial Holdings?

How could a well-located business park, in a booming region where space is at a premium, be declining in value?

Even allowing for the Great Recession, hadn't the market improved by the time the park sold last year? And isn't it even better now? The answers speak to a mongrel real-estate market that sometimes barks at the command of distant masters.

Back in 2007, at the peak of the pre-recession frenzy, the large Chicago investment company Walton bought a property portfolio from CalWest for $2.8 billion, using borrowed money. The Seattle Times reported that six local properties in the bundle sold for $254 million. With heavy debt obligations, Walton then ceded the CalWest portfolio in 2012 to New York private-equity giant Blackstone Group, which bundled it into an entity called IndCor Properties that contained many other assets.

In December 2014, Blackstone sold IndCor to GLP for $8.1 billion — leading to the Tukwila Commerce Center sale in February 2015. GLP had as its financial partner the sovereign wealth-management company of Singapore, known as GIC Pte.

Today, GLP appears to be breaking up the IndCor bundle, selling assets it doesn't like and refining its holdings to suit its investment needs. GLP's broker, Hartzell, cautions against reading too much into the nosedive narrative (from $70 million to $52 million to $42 million). Those sales, he explains, were likely linked with other asset sales in the region (per the Seattle Times' report), which wouldn't have been officially associated with the Tukwila transactions. Put differently, to buy property X for one price, you also have to buy properties Y and Z.

Thus, the humble Tukwila property is but a pawn in global investment strategies beyond its ken, perhaps unfairly maligned by market forces far from home. At the same time, it's an odd little market indicator — a late-deflating balloon left over from the great party of 2007, sprinkled with stale confetti and tears.

One industry professional affectionately describes the Tukwila property's tenants as “mostly mom-and-pops” in small buildings typically averaging around 2,000 square feet — hardly suited for Amazon's or Costco's warehouse needs. The place could potentially be redeveloped, but surely not by new owner BKM. It's a modest property for which the last two buyers surely overpaid.

Walton, Blackstone and GLP routinely do billion-dollar deals, so compared to them BKM is tiny — with only $850 million in investments during its short, three-year history.

In this way, Tukwila Commerce Center may finally have found an owner that understands its place — and correct value — in a regional, not global, portfolio.