On the Block: What do you do with a gorgeous white elephant?

Last month I wrote about Weyerhaeuser moving from its old Federal Way home to 200 Occidental in Pioneer Square. The month before that, I wrote about converting the top floors of Macy's downtown store to office space — now called 300 Pine — and the ensuing hunt for tenants.

Those two stories converge at the now empty Weyerhaeuser Building, a mammoth modernist edifice that sits on a 425-acre campus.

Using about $50 million in borrowed money, Los Angeles-based Industrial Realty Group bought the whole spread in February for $70.5 million. For the next 10 years, Weyerhaeuser will lease back half of its 130,000-square-foot technology center there. The space is north of the iconic office building that you see from Interstate 5. But the privately held IRG is now seeking new tenants and uses for the old campus. 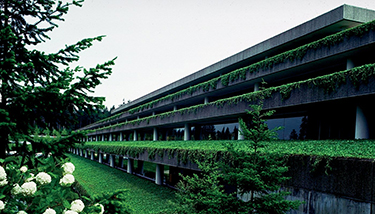 Photos by Ezra Stoller - Courtesy SOM [enlarge]
CollinsWoerman will renovate the interiors, but Tom Messmer says IRG won’t touch the outside of the building.

First and most controversially — to some neighboring home owners, at least — will be a 314,000-square-foot warehouse for processing Orca Bay Seafood's frozen wares. IRG says frozen fish don't smell.

IRG also plans a 721,000-square-foot warehouse for an undisclosed tenant, and more tenants are needed.

Toward that end, IRG is hosting a broker open house next week — by which time it expects to have a new name for the campus, courtesy of branding firm DEI Creative. The street address is 33663 Weyerhaeuser Way S., and will remain the same.

Like many motorists who pass by on the freeway, I've always loved but never visited Weyerhaeuser's handsome 1971 headquarters, with its green roof and ivy-covered terraces. Designed by Skidmore, Owings & Merrill, the “skyscraper on its side” has about 358,000 square feet on five floors. It was designed for another era, that of the suburban office park, when everyone drove and traffic was easy.

Today, of course, we live in a far different reality — as IRG's Tom Messmer is quick to acknowledge. He is the vice president of special projects and a savvy repurposer of old industrial parks, brownfields and obsolete office buildings. He's also living part-time on the old Weyerhaeuser campus — in one of a few houses the company actually built on North Lake.

“It's the nicest office I've ever had,” he said during a recent phone chat.

This is IRG's first foray into the Puget Sound region, but the Weyerhaeuser campus isn't that large compared to the company's past deals.

“Nobody's interested in those giant industrial sites but us,” says Messmer. “It's all adaptive reuse. That's our whole business — repurposing old, obsolete properties.” 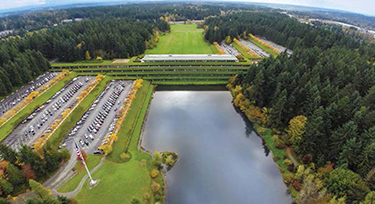 [enlarge]
Tom Messmer estimates that about two-thirds of the campus is open land, about half of which could be developed for industrial purposes.

However, he admits that the price IRG paid for the Weyerhaeuser campus was not cheap — not like those depressed Rust Belt properties. “Seventy million is a lot of money.”

To fill the whole headquarters building with one large tenant would be difficult, says Messmer. “That's like the unicorn.”

Weyerhaeuser previously had about 1,300 employees in the building, which comes with a cafeteria and meeting space that can accommodate 600 people.

“It's obsolete in Weyerhaeuser's terms” — since the company recently shrank its workforce and sold off several divisions — but he says it's still “a gem.”

CollinsWoerman will renovate the interiors, but Messmer says, “We're not gonna touch the outside of that building.”

Messmer estimates that about two-thirds of the campus is open land, about half of which could be developed for industrial purposes. For leasing, IRG is represented by broker Michael Hemphill of The Andover Co. 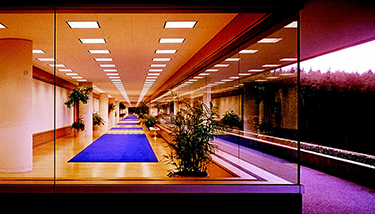 One selling point, as Messmer sees it, is the relative affordability and proximity of the campus compared to congested and high-priced Seattle. It's well situated in terms of the freeway and Highway 18, and there actually is a Park & Ride lot nearby. Plus, I remind him, if Sound Transit 3 passes in November, a Federal Way light-rail station will open in 2028. “The pendulum is swinging,” he laughs.

And, unlike in those contaminated Rust Belt properties where paint, garbage and solvents were routinely dumped, this campus is clean and ready for move-in.

“This was the easiest environmental due diligence I've ever had to do,” says Messmer.

The land actually had some residential zoning and platting before the campus was built in unincorporated King County. Federal Way annexed the area in 1994, leading to zoning agreements with Weyerhaeuser that could be revisited.

Messmer is well aware of this region's housing shortage, but housing development is not one of IRG's core businesses. “We're not talking to anyone about residential now. We'd certainly consider it. We'll be happy to talk if the city brings it up.”

For now, Messmer is happy to be commuting here from Orange County, with his fishing pole in hand. He expects the campus to take about five years to be fully developed.

Until then, he says, “We gotta get past everyone calling it the old Weyerhaeuser headquarters.”