On the Block: Here's how and why Big Fish Games turned the 1910 Maritime Building into its cool new HQ

The Maritime Building, at 906 Alaskan Way, languished for decades before Beacon Capital Partners bought the creaky old waterfront warehouse in 2015 for a recorded price of $13 million.

It was a warren of small offices, with sagging stairs, masonry crumbs crunching underfoot and a general air of decrepitude. Over the years, I can recall thinking, All it would take is one good earthquake….

Yet somehow the five-story concrete structure, built in 1910 with old-growth, post-and-beam timber, survived the 2001 Nisqually quake. And that year's dot-com crash. And the great recession. And soil subsidence caused by Bertha's boring. (The Hotson family of Houston owned it since the early 1960s, before selling. At least one knowledgeable waterfront observer says that the sale also included a purchase option contract that upped the value to more like $38 million, but that can't be proven in public records.)

The building is now completely restored and expanded for Big Fish Games. The game developer occupies 187,000 square feet on the top seven floors of what is now an eight-story building. 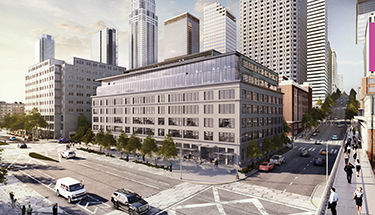 Image by Big Fish Games [enlarge]
Big Fish says its new headquarters will be a big help in hiring, especially after the viaduct comes down.

On a tour last week, I asked the company's affable director of real estate and facilities, Evan Cottingham, if he also remembered the Maritime Building's humble past.

Of course he did! Arriving in town as a young U.W. student, decades ago, he fondly recalls the building and its tiny, cowboy-themed Western Coffee Shop, which closed in 1994.


Big Fish began searching for new digs in 2016, after filling up its old home at Martin Selig's 333 Elliott West. The lease was soon to expire. Over nine years, says Cottingham, the company had grown from about 200 employees to over 600. It expanded from two floors and 60,000 square feet to take the whole 133,000-square-foot building as Classmates.com stumbled, shrank and was finally sold.

First they were told it wasn't on the market. Beacon initially tried to gain approval for an eight-story addition to the newly landmarked building, with both offices and apartments.

“That's why it wasn't on our radar,” says Cottingham. Wrong size, wrong specs.

The landmarks board rejected that proposal, and Beacon changed plans to add only three new floors of offices. “That got it back into our wheelhouse. It really was a perfect storm.”

Architect IA and Big Fish founder Paul Thelen (since retired) were also on the tour. They took the freight elevator to the roof, “And it was surreal. The viaduct was closed down because they were filming “Fifty Shades Darker” — the sequel to “Fifty Shades of Grey.”

“Paul said, ‘That's it. We're done. That's where we're going.' He loved the building. He wanted to be a part of it. He said, If we didn't take it, someone else wouldn't do it justice.”


The potential at the time wasn't hard to see, though very much a work in progress. I toured the building last January with an AIA group, while construction was still underway, the new walls and seismic bracing still in the raw. Nearly 2,000 new piles supported what's essentially a new modern foundation. A new central core and stairs were added. The historic casement windows were all being pulled and repaired, and old doors and timber were salvaged.

NBBJ and Turner Construction renovated the building for Beacon. Work began in late 2016. John Hansen at CBRE and Jesse Ottele and Cavan O'Keefe at NKF represented Beacon in the Big Fish lease. 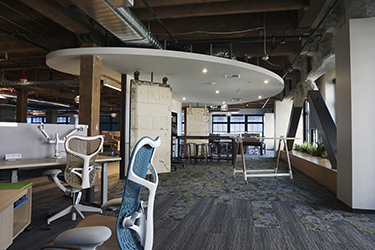 [enlarge]
Part of the charm of the new space is the mix of old and new.

Beacon says it spent about $25 million on the renovation — a big risk, since it bought the building while Bertha was still stuck in her rescue pit.

Abbott Construction was the general contractor for the new offices. Cottingham describes the brief as “this collision of two designs… the old building meeting the modern building.”

Indeed, part of its charm is the proudly mismatched old and new, with different ceiling heights and column placements on various floors.

Modern LED lighting illuminates the sandblasted old timbers. Ceilings and fireproofing are left mostly raw and industrial. Ducts snake in and out of the way. Some concrete walls, no longer structural, were simply left in place. Old metal fire doors pivot on spindles like weather vanes, now merely decorative.

Traces of construction remain, too. “We intentionally left some of the old survey marks” on the walls, says Cottingham.

Eight tons of soda blasting were used to scour the ceilings — removing what he calls “110 years of dirt and dust and grime.”

Noting the salvaged fir floors on five, he adds, “It's gonna get dinged up.” This is a place to be used by creative types, not some staid, scuff-free corporate office park.

The floors are large and open, ranging from about 23,000 to 33,000 square feet. It's a layout designed to foster “unintentional collisions,” with about 95 percent open plan, five percent walled offices and conference rooms.

“We had to accommodate extroverts, introverts and omni-verts.” There are more and smaller conference rooms than at 333 Elliott, which was developed in 2008 for an older corporate ethos. (Related: Sales automation company Outreach just leased three floors there.)


We tour the building while mostly empty, starting on the top floor. On eight, “It's all amenities,” with a gym, kitchen and huge landscaped deck with firepit overlooking the waterfront. There's a game room, natch, plus a gym and other perks to wow prospective hires. (Recruiting will be that much easier when Kiewit begins the $94 million viaduct removal, possibly as early as this winter.)

The lobby is on the seventh floor (complete with fish tank), and there is an internal stair down to six. The open stairwell is festooned with graphics and characters from various games. It leads to an informal, bleacher-style hangout space and a bench autographed by everyone who had a hand in the Maritime Building redo.

There's a mini-film studio, sound-proofed “Faraday cages” for testing devices and apps, and a dedicated art room, with slop sink, looking east. The view is surprisingly light and open, facing the U-shaped courtyard of the old federal office building.

We wander past a pool table and hanging plants on what Cottingham dubs “broccoli walls.” (Note to workers: Do not eat. Green walls do not contain actual broccoli.)


Interestingly, for an only 16-year-old company, Big Fish nods to the building's past with a history wall, including a timeline and artifacts from past tenants. Over the years, there were 683 different companies in the building.

“Filson was in this building,” says Cottingham. So were John Deere and Western Union. An intern used eBay to source some of the cool collectibles on display. (Plans to include Big Fish on the First Thursday art walk will hopefully include said wall.)

And, on the subject of history, Big Fish was sold again last fall for $990 million to privately held Aristocrat Technologies, an Australian firm. (Prior owner Churchill Downs had acquired the company in 2014 for $885 million.) Aristocrat will likely co-op some of the space as needed.


Why the Maritime Building, why the waterfront, why not SLU or the CBD or someplace cheaper in the suburbs? Cottingham explains that a central, transit-friendly location, as well as the killer views, was key to the search.

About 40 percent of Big Fish staff commute from north of downtown, about 30 percent from the south, and others came by ferry or even the Eastside. Data was a driver. Whiteboards were used to map commutes. The company estimates that the move will reduce the average number of buses needed per employee from 2.7 to 1.1. Many will walk or bike.

“We've seen a huge reduction in the number of people who have to drive,” says Cottingham. A press release says the number will drop from 40 to 27 percent.

The one-level basement garage accommodates about 70 vehicles. (Soils are wet on the waterfront, so you really can't go deeper.) Big Fish has about 20 spaces reserved, and the garage will be open for paid public parking after six o'clock.

As for the intangibles of culture, amenities and staff retention, “We interviewed every one of our employees,” says Cottingham, to assess what they wanted.

Big Fish is hiring, with 100 openings advertised online. The new HQ will be a big draw. “We need to get talent.”

For now, the second floor will remain vacant as what Cottingham calls “pocket space” for future expansion, with no plans to sublease. (There's also a satellite office in Oakland with about 100 employees.)

Big Fish has put its new, less cartoony logo and signage on the building.

The company has a long-term lease with unspecified terms that was signed with Beacon before it recently sold the building for $186 million to STRS Ohio, that state's teachers retirement system.

Who's leasing the commercial space for the new owner is unknown. Cottingham would like to see restaurants. Local merchants cite rumors of a gastropub or brewery. Many waterfront landlords seem to be waiting for the viaduct demolition before courting and signing new tenants.

Maybe it's time for the Western Coffee Shop to make a comeback, this time with room for actual tables.