On the Block: Vulcan and ZGF ready 300 Dexter, but with Amazon done growing in SLU, who will lease it?

Three years ago, in a very different market, Vulcan Real Estate paid almost $30 million for the corner property at 300 Dexter Ave. N., aka Block 57W. Back then, it seemed that Vulcan's favorite tenant, Amazon, had an unlimited appetite for space in South Lake Union.

What a difference three years can make. Since then, Amazon bullied the Seattle City Council over its enacted and swiftly rescinded head tax to alleviate homelessness. It briefly paused a Denny Triangle tower — on land it owns — and finally pulled out of its Rainier Square lease.

It stepped daintily and cluelessly into the inferno of New York City politics with its botched HQ2 rollout for Queens. Jeff Bezos didn't even think to call Alexandria Ocasio-Cortez. Big mistake. Unsurprisingly, in a wealthy, congested city that doesn't need any more arrogant tech bros seeking handouts (because it already has arrogant Wall Street bros getting federal bailouts), the civic response there was the opposite of ours. The headline was, essentially, New York to Amazon: Drop Dead.

And lately Amazon has been equivocally, strategically hinting that all future local growth — irrespective of Washington, D.C., and national expansion plans — could be redirected to EZ-to-build Bellevue, where Vulcan is readying two big office projects on land it owns near the light rail station. (A related side note: Downtown Bellevue Station will open in 2023; while SLU's light rail stops on the line to Ballard won't arrive until 2035. Just saying.)

Where does that leave poor little 300 Dexter? The project had its first design review in the fall of 2016, when SLU was all unicorns and rainbows. The second and likely final meeting is set for 8 p.m. Wednesday at Queen Anne Community Center, 1901 First Ave. W.

ZGF designed the 11-story building, with about 200,000 square feet of offices and 6,000 square feet of ground-floor retail. The retail is concentrated in two bays to the south, on the corner of Thomas Street, facing a public plaza. The lobby is pushed north on Dexter. The project is targeting LEED gold certification.

A terrace on the top floor will face south. There will be an inset, beltline terrace on the sixth floor. A colorful green geometric mosaic might go on the otherwise blank north facade. (It faces a small corner parking lot owned by Kilroy Real Estate; see below.)

[enlarge]
Retail is concentrated in two bays to the south, on the corner of Thomas Street, facing a public plaza.

Vulcan previously told the DJC that 300 Dexter could possibly be built on a speculative basis for one or more tenants, in what would be a departure from past single-tenant, pre-leased practices. However, the project hasn't yet applied for a construction permit. (Its land use permit application was filed last month.) Though not quite the pitiful orphan tugging at your coattail, the building needs a little love, and luck, in this new climate.

Also, Vulcan has bigger fish to fry. It's busy with its Lakefront Blocks in SLU, which are fully leased to Google, and expected to open by year's end. It's also planning another Google-leased office tower at 520 Westlake Ave. N. (aka the Guitar Center block). And it has about 1.8 million square feet of offices planned in Bellevue, where Amazon leasing rumors continue to swirl. (Vulcan's apartment projects we'll ignore for today.)

That makes 300 Dexter the smallest child in the class photo. And that class also includes three other Vulcan pupils in SLU: 111 Westlake Ave. N., 901 Harrison St. and Block 37S (aka 971 Valley St.), all in varying stages of permitting and planning.

Given that the tech industry ratio of square feet per employee is shrinking ever further (150 square feet is the parsimonious new standard), about 1,300 office workers will eventually occupy 300 Dexter. By comparison, Rainier Square could house around 3,500 people (excluding the apartments and hotel).

To serve 300 Dexter's future occupants, four levels of underground parking with 206 stalls will be accessed from the alley to the east. Only 76 bike stalls are indicated, with the bike room entrance facing the southbound bike lane on Dexter. That may reflect 2016 state-of-the-market thinking, too. Today, what sane person drives in SLU? Walking is faster. 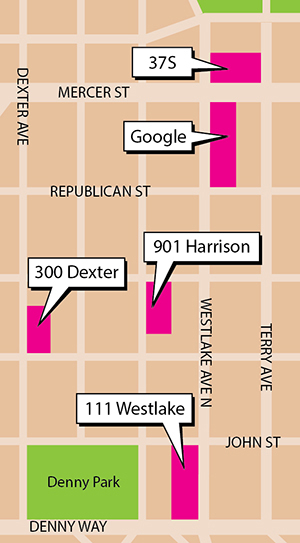 Vulcan's site is directly west of its recently completed Arbor Blocks, which are fully leased to Facebook; and east across Dexter from Kilroy's 333 Dexter, which is scheduled for completion late this year with no announced tenant(s) for its 645,000 square feet.

If Amazon's expansion boom is over in SLU (though the company will remain a massive presence), Facebook and Google are invading. Or, to think of it differently, they're fleeing the Bay Area's higher prices — both commercial and, for employees, residential.

For that reason, though Broderick doesn't even mention 300 Dexter in its recent first quarter report (which puts the SLU vacancy rate at 1.7 percent for Class A space, tightest in the city), it will inevitably fill up when Vulcan chooses to make it a priority. The only question is when. (Remember those other children in the class photo.)

Broderick says that there's now about 5.3 million square feet of Class A space available in SLU, plus around 5 million square feet in less premium categories. Broderick also notes that Apple and Oracle are actively shopping our market. But they and others will also be looking at 333 Dexter, Dexter Yard, 2+U and Bellevue.

For sheer proximity's sake, Facebook would be the ideal tenant for 300 Dexter (aka Arbor Blocks 3?), as Vulcan well knows. And it can afford to wait.