On the Block: The humble old Mercer trench is about get a lot more glamorous

Once upon a time, before the viaduct removal and new tunnel, the collision between Aurora and one-way Mercer was an ungodly mess. Does anyone remember with fondness the old diagonal eastbound schuss up Broad Street (third gear, 50 mph), then careening north past the Duck parking lot to get to Uptown? Does anyone miss the westbound weave on Valley? No and no. (Tower Records is another story.)

Before the widening of Mercer Street, with the new Aurora span above, the narrow old raised sidewalks were a deathtrap. Now there's a bike path, plantings, and a genuinely relaxed (re)connection between sleepy Lower Queen Anne and booming South Lake Union. Mercer has become a pedestrian trade route, with grocery shoppers lugging their QFC bags back to SLU. Those two neighborhoods, severed by Aurora in the 1950s, are now being knitted back together again. 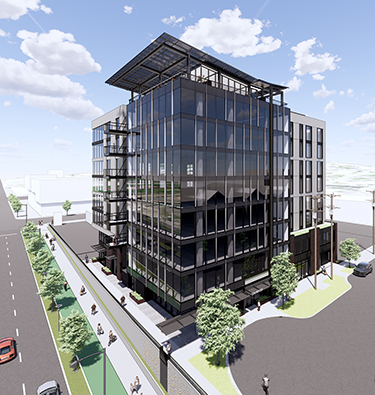 Overlooking the old Mercer trench, from the north side, will be Schnitzer West's planned new office building at 570 Mercer St. It's one of the first new harbingers of change in that boundary area. BioMed Realty and Alexandria Real Estate Equities are also poised to reshape the former Mercer-Aurora-Dexter DMZ between the two neighborhoods. Dexter Yard is underway (from BMR), and Alexandria's redevelopment of the Mercer Mega Block is nigh, though with no announced start date.

Schnitzer West and architect Weber Thompson haven't yet given 570 Mercer an official name. The project will have its third and likely final design review on May 5, in a virtual meeting.

Project numbers haven't changed much since the prior review last fall: eight stories, with about 116,000 square feet of offices and 6,100 square feet of retail/commercial space. Two levels of underground parking will have 66 stalls — seven with charging stations for electric vehicles. A bike room will have 107 stalls, plus a shower and repair station.

Total project size, including the parking, is about 171,000 square feet. The Mandatory Housing Affordability fee is calculated at $1.2 million. Schnitzer West acquired the site in late 2019 for almost $7.8 million. The project budget hasn't been disclosed.

PCL Construction Services will build 570 Mercer, and says the goal is to start this November, with the demolition of two old warehouses. May 2023 is the target for completion. No office broker has been announced.

Despite the address, 570 Mercer will really be accessed from above, on the dead end of Sixth Avenue North. The lobby and one retail bay will face Sixth; the second bay will face south to the sidewalk running above Mercer. Some outdoor seating is indicated there, possibly for a cafe.

What will future office workers see from the roof — apart from bees and seaplanes? South across Mercer is the vacant patch of Bill & Melinda Gates Foundation turf where a third office building was once planned; that Phase II project was scrapped, or delayed, two years ago. No future use or potential sale has been announced.

Looking east, Alexandria is planning offices at 601 Dexter St. (aka the old Copiers Northwest building on the corner of Mercer); and at 701 Dexter, and on the Mercer Mega Block. It's also planning a modular apartment building, with Sustainable Living Innovations, at 615 Dexter. And Investco has an approved apartment plan at 701 Valley St. that hasn't yet begun.

Looking west back to LQA, the Pong family and its Puget Sound Hospitality have put several properties on the block, including the old Seattle Business Center — which was new when the Mercer trench was dug. A few neighboring properties have also recently nosed onto the market, and the old trench looks to be rising in value.