AIA gives out 16 awards for projects, and one ‘nearly brought us to tears' 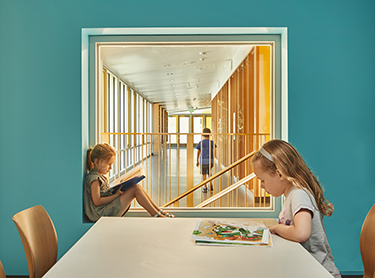 Photo by Benjamin Benschneider [enlarge]
The AIA jury said Mahlum’s design for Northwood Elementary is “so well scaled that as an adult you really felt a little too big.”

There was a teaching moment at Benaroya Hall on Monday night during the AIA Seattle 2016 Honor Awards for Washington Architecture event. The word “modesty” came up again and again.

It's timely. When money invested in real estate simply follows the market, it only seeks monetary returns for owners and investors.

The projects that were recognized Monday do much more. They respect their surroundings by making beautiful, useful spaces on just a small footprint. About a quarter of them meet the rigorous energy criteria of the 2030 Challenge, with some giving energy back to the grid. Many bring returns to their environment in the form of a better pedestrian experience.

See all the winners here.

Jurors Mimi Hoang of nARCHITECTS and Anna Dyson, who teaches at Rensselaer Polytechnic Institute, talked about the projects' architectural values as they dispensed awards.

They gave 16 awards, selected from 140 projects that were submitted.

Three honor awards were reserved for projects that transcend the program type. In other words, these projects change the way we interact with such a building. They also show evidence, according to the jurors, of a kind of “mania in the clarity and precision of the design concept.” And some of them, like Mahlum's Northwood Elementary School, reach for the grail of modern design: social transformation.

The jury gave the school its greatest praise: “This is the project that nearly brought us to tears.” They spoke of interconnected yet clearly legible spaces that make occupants feel expansive and connected with the outdoors. Materials and acoustic design served spatial connections seamlessly, and they noted that “normally it would be impossible to place the cafeteria next to a library.” Freeing but never chaotic, it is also “so well scaled that as an adult you really felt a little too big.”

Another Honor Award went to Martin's Lane Winery in Kelowna, B.C., that was designed by Olson Kundig. Spectacular and spare, it is a composition of pivoting roofs balanced on a building dug into a hillside.

The third Honor Award went to a project type that is unusual among award-winning architecture: a spec office building in Seattle called NorthEdge. Perkins+Will designed NorthEdge to interact with an urban shoreline using sensitivity and intelligence.

• Niamey 2000 Urban Housing by united4design is a one-story multi-family building in Niger built using traditional masonry and construction techniques. The jurors called it an intricate puzzle of multiple families within the scale of a single-family residence. Sophisticated natural ventilation brings lasting value.

• Lightbox by Bohlin Cywinski Jackson is a typical award-ready Northwest project type: a home in the woods. But jurors chose it not only for the clarity of the views and integration into the landscape, but for the modesty of the footprint. Control — of design details, concept, size and scale — made this a winner.

• Civil War Memorial is a concept-only design for Bogota done by Metrica LLC. The jurors praised the well-developed concept for a heavy concrete structure with interlacing beams over open space.

• NBBJ's high-rise Doppler Building for Amazon in the Denny Triangle won for it's uncanny achievement of “dematerializing” the bulk of the tower with dichroic glass (layered with metal).

• The jury also praised Perkins+Will's mid-rise Allen Institute for Brain Science in Seattle for its “control over views, large and small, public and private,” and for its successful public art and art installations.

• CLTHouse by atelierjones is very modest in scale, fitted onto a small and impossibly irregular corner lot in Seattle. It uses panelized wood, sometimes with curvy windows cut through. Jurors called it a deft, agile, dimensional composition.

• Chophouse Row, by Sundberg Kennedy Ly-Au Young Architects in collaboration with Graham Baba Architects, was recognized for rescuing pieces of an old building and putting them to work as organizing connections between old and new spaces.

• Lake Sammamish State Park Bathhouse by Patano Studio Architecture is a “closed boundary, a porous threshold” praised by the jury for its efficiency and low profile, and also for the materials, which change color with the rain.

Two non-building projects got Honorable Mentions. Map the Square in Seattle by AIA Seattle Young Architects Forum was a temporary installation of kiosks in Pioneer Square where passersby could register their vision of the urban space. This experiment may point the way toward a future in which urban design and architecture can be further democratized.

Carved from Color + Musical Movement, a project in Seattle by GGLO, also got an Honorable Mention. It's a temporary public art project that popped up along First Avenue at Harbor Steps. Living room compositions of usable furnishings, all spray painted the same color, invited contemplation on the meaning of home, and also homelessness.

The Miller Hull Partnership's Bullitt Center stood tall in a special award category — Energy in Design — dedicated to energy conservation, by giving back more to the grid than any other entry, all with standout architecture. Jurors noted that they would not consider awards in this category if the submittals did not also meet high design standards in every other way.

The jurors dispensed a tip for future submitters to the awards program: Pay attention to the completeness of technical drawings, especially the diagrammatic ones that show ways that small decisions determined the overall design.

All in all, this awards program stood out among similar events — holding out hope that Seattle is not only a supercharged hub of growth; it's also a place that can lead with the best evolving design values.