Kevin Cavenaugh has a bone to pick with the ways new projects gets funded.

The Portland developer has a background in architecture and said one of his goals is to make visually striking structures. But he said the requirements of institutional investors often limit what he can do.

So Cavenaugh is trying something new with his latest project: He wants to raise $1.5 million from individuals — and not just high net worth people.

Cavenaugh's firm, Guerrilla Development Co., is planning a six-story, 56,000-square-foot office project called Fair-Haired Dumbbell just east of the Burnside Bridge in Portland. The complex will have two structures that flare out with skybridges in between, so it will kind of resemble a dumbbell. What about the "fair-haired" part? Cavenaugh will only say, "It's kind of a secret." 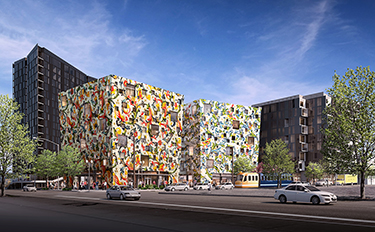 Courtesy FFA Architecture and Interiors [enlarge]
Guerrilla Development is seeking $1.5 million from investors, and not just high net worth ones, for this six-story office project in Portland.

Crowdfunding is starting to be used for real estate projects, but generally the focus is on accredited investors — people with a net worth of at least $1 million or an annual income over $200,000.

For example, McMenamins used crowdfunding from accredited investors to pay for about a quarter of the $26 million it needed to renovate Anderson School in Bothell.

Cavenaugh said he could do Fair-Haired Dumbbell without crowdfunding. He said he already has all the financing lined up — including $2.5 million in traditional equity — for the more than $16 million project. If he reaches his crowdfunding goal, he'll use that money to replace some of the traditional equity.

“I don't need crowdfunding to make (the project) happen,” Cavenaugh said, “but I really want it because it has the ability to dilute the voice of big banks and institutional investors in real estate development.”

Guerrilla Development has set a minimum investment of $3,000 through a portal on its website. As of last week, Cavenaugh said he has raised about $130,000, which is less than what he'd expected by now. He said he underestimated how long it would take people to vet the project before investing. About 115 people have signed up through the online investment portal, but only 12 have committed money so far.

People in Oregon, Washington, California, Virginia, Massachusetts and Washington, D.C., can invest in his project under the current Securities and Exchange Commission rules.

Fair-Haired Dumbbell will break ground May 15, Cavenaugh said, with or without the crowdfunding money. It will take about eight months to build, and is about 44 percent preleased.

Cavenaugh considers himself a contrarian when it comes to real estate. A lot of tall residential buildings are going up near his site, so he went for a small office building. He found the cardboard models of his project looked dull, so he added some Florentine wrapping paper just for fun. Then he and a colleague realized they wanted that kind of look on the actual building.

“I want cars to slowly roll into each other on Burnside because they are looking at the building rather than the road,” Cavenaugh said.

FFA Architecture and Interiors, where Cavenaugh worked about a decade ago, is designing Fair-Haired Dumbbell. Andersen Construction is the general contractor and co-owner.

Cavenaugh was a Loeb Fellow at Harvard Graduate School of Design, but said he never became a licensed architect. He opted instead for development because he felt it would be easier to do something like Dumbbell on his own rather than trying to find a client who would buy into the plan.

Cavenaugh said Dumbbell is his seventh project since the recession. 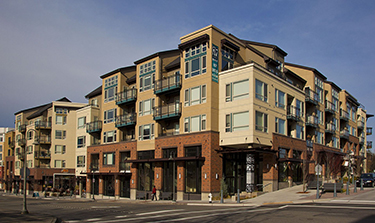 The sale of 77 Central is one for the record books.

Dupre + Scott Apartment Advisors' sales data shows this is only the eighth apartment complex in this area to sell for more than $500,000 per unit. The other seven buildings to hit that per-unit price were either in Seattle or Bellevue.

This is the biggest apartment sale of the year by dollar amount, and the highest per unit since last July when Holland Partner Group sold the 41-story Premiere on Pine for $243 million — or $623,974 per unit.

Seco Development, which you may recognize as the developer of the massive Southport project in Renton, built 77 Central. It opened in 2009.

Sales like 77 Central show just how hot Seattle's apartment market has gotten. No apartment complex in this region topped $500,000 per unit until 2013, according to Dupre + Scott. The Bravern Signature Residences sold in 2013 for $308 million — kicking down that door by selling at what remains the record for dollar volume and price per unit: $676,923.

The two-week closure of the Alaskan Way Viaduct begins Friday, and it could get rough for people who go downtown during peak traffic times.

In response, Urban Renaissance Group is extending the hours its nine downtown office buildings will be open, hoping that will help take some people off the roads during the busiest times.

The viaduct will be closed as a precaution while the tunnel boring machine Bertha digs under it.