At the Movies: Gorgeous ‘2049' breaks the ‘Blade Runner' spell 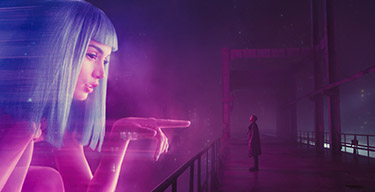 Denis Villeneuve's follow-up to "Blade Runner" is well crafted but falls victim to the same bad habits that are common in sequels.

“We're all just looking out for something real,” says Robin Wright's police captain in “Blade Runner 2049.”

Wright, an icy, steely actress seemingly born for the world of “Blade Runner,” is speaking to her replicant detective whose name is his serial number: KDC-3-7 — or “K,” for short (Ryan Gosling). But it's a line that resonates beyond the robotic reality of “Blade Runner.” What contemporary moviegoer won't nod with understanding?

Ridley Scott's 1982 sci-fi neo-noir original extracted the frightful premise of Philip K. Dick's novel “Do Androids Dream of Electric Sheep?” — the horror of not knowing if you're real or not — and overlaid it across an eerie and mesmerizing sci-fi void. Its slick surfaces and the radically atmospheric synthesizer score by Vangelis — not to mention Daryl Hannah's hair and some serious shoulder pads — made “Blade Runner” an electric portrait of ‘80s soullessness. Its futuristic grandeur came with a cynical shrug.

Denis Villeneuve's impressively crafted and deeply respectful sequel, set 30 years later, has — more than most of its rebooting ilk — carefully preserved much of the original's DNA. The photography, by Roger Deakins, is resolutely gorgeous, filled with stark perpendicular lines, glowing orange hazes and yellow pools of reflected light. Gosling, a worthy heir to Harrison Ford, shares his predecessor's inclination for both restraint and a smirk.

But while “Blade Runner 2049” is always something to look at, an overly elaborate script and some other bad habits common to today's sequel machinery — such as glaring product placement — have broken the “Blade Runner” spell.

It may be too harsh to grade “2049” against the original, especially when so many copycats have since diluted its dystopian wonder. Yet while “2049” still stands out from the pack, it lacks the mystery of the original. (Or at least the director's cut. The 1982 film was itself a replicant with too many versions to keep straight.) This latest updated model, less punk-rock in attitude, wants to connect the dots and illuminate backgrounds that stayed dark the first time around.

There are hints, one fears watching “2049,” of a “cinematic universe” scaffolding being erected. Scott is a producer this time around, but he had his hands in the film's development, along with “Blade Runner” scribe Hampton Fancher (who co-writes here with Michael Green). Scott instead went off to make “Alien: Covenant” but there seems to be some growing connective tissue between the franchises. Certainly there's much of the same tiresome creation mythology and Christ-imagery, along with the throat-clearing monologues about angels and demons (here delivered by Jared Leto's crazy-eyed AI visionary).

The larger apparatus detracts from what is, at heart, a detective story — and a fairly good one, at that. Like Ford's Rick Deckard, K is a Blade Runner seeking out-modeled replicants to “retire.” But whereas Deckard's identity was — depending on whom you ask — up for grabs, K is definitely a replicant. He undergoes “baseline” questioning after each mission to establish that he hasn't started feeling emotions. (In this quiz, the correct answer to “How does it feel like to hold a baby in your arms?” is “Interlinked.”)

Gosling has little about him that suggests android, unless future scientists are planning to work extremely hard on a “charmingly bemused” setting. I personally prefer his more alive and loose-limbed L.A. detective from “The Nice Guys,” but Gosling's nature plays into the movie. We're convinced K is more, especially after, while on a mission, he stumbles on to the remains of a replicant woman who apparently died in child birth.

As Wright's character puts it, replicant reproduction would “break the world.” Humans would no longer hold dominion over their cheap, disposable work force; a rebellion would spark. If “Blade Runner” was the nightmare of being soulless, “2049” is the dream of being real, with a leather jacket-clad Pinocchio in a flying car. The search for the child from 20 years earlier sends K in strange places.

Questions of authenticity are elsewhere, too. K's lone companion is a digital woman named Joi (Ana de Armas), a holographic product advertised to be “whatever is your fancy.” He comes to believe in their relationship, only to look crestfallen at the billboard advertising Joi. K is reminded again and again that any feeling of uniqueness is imaginary, or a marketing gimmick.

It's a question Villeneuve's movie asks itself, too. A hologram of Elvis plays while a fistfight careens through a Vegas lounge. The late-arriving Harrison Ford is there in the flesh, but he's coming off a “Star Wars” franchise that reanimated actors, including a dead one, in younger digital facsimiles. “Blade Runner 2049” quietly ponders its own existence amid today's blockbusters: Can a replicant movie be real?

There is much to like here, but “2049,” like “Alien: Covenant,” feels too enraptured with its own headiness. Even Nabokov's “Pale Fire” makes a cameo. Maybe “Blade Runner” wore its complexities on its sleeve, too. But it's hard not to agree with the old blade runner who turns up late in the film and tells K: “I had your job once. It was simpler then.”