Design Perspectives: Urban agriculture is looking up in Seattle

It's been a great year for urban agriculture, and Brad Halm is looking forward to a great harvest in 2011.

His Seattle Urban Farm Co. helps people, businesses and institutions grow food in the city, and he estimates that he done 150 projects since moving to Seattle and starting the firm four years ago.

He and business partner Colin McCrate do everything from design and construction to managing productive patches of land, hiring help seasonally. 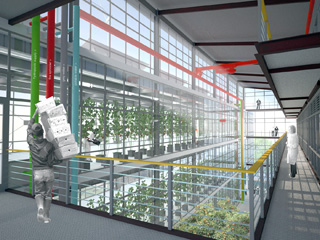 Renderings by Weber Thompson [enlarge]
The Newark Vertical Farm is a concept designed by Weber Thompson for the city of Newark, N.J., to test vertical farming, urban agriculture, sustainable design and energy efficiency.

Although “urban” and “farm” may seem contradictory, Halm and others are proving that people can live in the city and grow their own vegetables, too. It all comes down to making a place, managing soil, planting successfully and harvesting. Halm finds he does a lot of teaching along the way.

“We don't have a lot of space,” he said. “There's a need to maximize time and money.”

Most of his business is with homeowners who want a productive garden in their backyard. Custom chicken coops have been important from the beginning, and thanks to recent changes in Seattle's land use code that now allow up to eight fowl (no roosters) and also permit small goats, he and McCrate expect to build a few more chicken coops and handsome animal pens from Ravenna to Wedgewood.

At the same time, they'll be expanding the rooftop garden that supplies the Bastille Cafe & Bar in Ballard with its delicate lettuces, heirloom green beans and fresh rosemary for a signature cocktail.

The new city legislation, which went into effect this fall, opens up more areas to farmer's markets, and accommodates dedicated food production on rooftop greenhouses with a 15-foot exemption to height limits in a variety of higher density zones.

In the near term, the changes should increase demand for locally grown and processed food through expanding farmer's markets. As the economy picks up, they could transform the city, making it more self-sufficient and creating a new crop of green jobs. 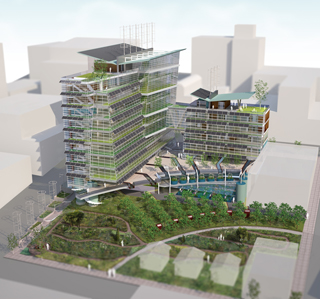 [enlarge]
The Eco-Laboratory concept was created for a site in Belltown as part of a design competition, not for an actual development. The project has indoor space for growing food. It is part of an exhibit at the Smithsonian Cooper Hewitt National Museum of Design. More information is at tiny.cc/ajs8l.

Halm is getting calls from restaurants who want their own rooftop gardens, and from developers and corporate groups who are looking at partnering with commercial growers, or simply offering rooftop gardening space as an amenity to their employees.

He thinks the 15-foot exemption could make a big difference in his business.

“I think it's going to explode in the next few years,” he said.

The provision is going to change the pro forma equation for some developers who are interested in sustainability, according to Myer Harrell, an architect with Seattle-based Weber Thompson who is working on a portfolio that combines architecture with growing food. His work reflects an international interest in “vertical farming,” which involves intensive growing techniques above the ground — either in greenhouse-like interiors or on open decks and rooftops.

Could people living in a multi-story project get their five servings a day from vegetables grown in or on their own building? Harrell said he did the math. And the answer: “Between 50 percent and 100 percent could have those needs met.”

In addition to the urban agriculture changes, new Green Factor provisions in the city's commercial zoning code would reward developers and owners who put bedding plants — including food plants — on more surfaces, including rooftop gardens at various levels.

People like Halm and Harrell are well-positioned to participate in a new sector of the local economy, one that involves growing and selling food and food products in the city. Although the commercial market is still developing, the network of enthusiasts, activists and nonprofits is huge, and knowledge about growing food in the city is staggering.

The roots of urban agriculture in Seattle go back to the late 1970s, when the nonprofit Seattle Tilth emerged out of growing interest in organic farming. The organization is still going strong as an advocate and educational resource.

Seattle's P-Patch network — with more than 60 permanent sites all over the city and 2,000 individual plots — is a national model for community gardening. Originally assumed to be a neighborly arrangement to use extra land or an interim use for excess public space, it's now a politically untouchable program administered through the Department of Neighborhoods.

But new, more Gen-Y groups like the local Alleycat Acres and national Crop Mob are also creating close-in space for growing fruits and vegetables, while bringing a more urban edge to the organic gardening movement. They are using the Internet and social networking to gain participation, support and visibility for urban agriculture.

Mark Musick of Seattle Public Utilities has compiled a list of well over 50 nonprofits involved in urban agriculture locally, including seven separate organizations in the regional Tilth network, from Snohomish to Oregon. By his count, 60 websites and blogs are devoted to growing and distributing food in Seattle. There are over 20 urban agriculture-centered businesses in the city, and that does not include design firms that have an active or potential interest in creating landscapes or buildings where food can be grown.

The depth of their collective knowledge and political power was evident this fall. In the first major step toward its newly adopted goal of carbon neutrality, the Seattle City Council sponsored a well-publicized, interactive presentation of “white papers” compiled by networks committed to bringing the city's net contribution to greenhouse gas emissions down to a very ambitious zero.

Urban agriculture was represented by the Seattle Good Food Network, which counts 129 members. Presenters reminded the crowd that traditional farming has become hugely dependent on fossil fuels, and that transportation, processing and packaging of food generates a large amount of carbon and waste.

Seattle City Council president and longtime local food activist Richard Conlin shares their sense of urgency. Because the food we eat travels an average of 1,500 miles, according to Conlin, “Food becomes an incredibly important way to approach our carbon emissions.”

Conlin would like Seattle to consider the local food supply, the “food shed,” with the same urgency that we have historically (and successfully) sought a steady, clean and sustainable water supply.

And the networks we have now, especially with nearby farming areas, will become increasingly important.

“We are not going to grow all of our food supply in Seattle,” said Conlin. “Not in Seattle, not in King County. What we are going to do is to make those connections.”

The Seattle Good Food agenda includes protecting rural farmlands through transfer of development rights, expanding opportunities for growing and selling food in the city, and “demand management” — educating and networking with large employers to increase demand for buying and eating locally, much like local governments have changed commuting habits by working through businesses. 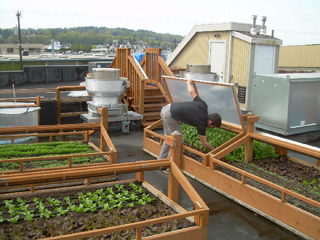 This should lead to more small businesses like Halm's. But urban farming is not like the rural kind, where land is plentiful and neighbors are scarce. In the city, the neighbors are next door, and they want their place to look good, smell good and stay reasonably quiet.

All this is possible, according to urban farming advocates, with regulatory support, good design and management, and reasonable expectations.

Plenty of businesses seem to be seeking a place in the new era of urban agriculture. This month, more than 50 developers, design professionals and urban agriculture-related business people attended an event sponsored by the Seattle district council of the Urban Land Institute, a smart-growth think tank.

The new wave of urban agriculture is not tied to preconceptions about city or country life — and, in the case of vertical farming, may not be tied to the ground plane.

In the meantime, pioneers of commercial urban farming continue to search for available land like the Sferra family acreage that is tucked into a pocket of pastoral land between Rainier Beach and Interstate 5. Farmer, educator and consultant Nicole Jain Capizzi has leased a half-acre there for her intensive Amaranth Urban Farm, and has ended her first successful season of subscription-based vegetable production. She hopes to employ more and grow even more food next year.

“This is an exciting time to be an urban farmer,” she said.