Here's a summer scene: In the middle of the city, people find their way down to a sandy shore to enjoy a little beach reading without buying a ticket out of town. With reasonably clean water lapping at their toes, it's possible to look up at the outlines of a modern tower.

They also can dive into a public saltwater pool. The poolside landscape on which they stand is actually a new pier-like structure.

At another point along the water's edge, a water taxi slides by a modern library. People circulate freely between the downtown streets and the urban waterfront on weekdays and weekends. Bicyclists can be seen approaching the edge and passing to and fro on the shoreline, along with skateboarders and pedestrians. 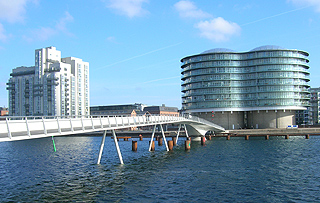 Photo courtesy of i-Sustain [enlarge]
The building on the right is two grain silos converted into apartments. A popular pedestrian bridge connects them to the rest of the Copenhagen harbor.

Sound like a utopian fantasy? All of it is happening right now in the harbors of Copenhagen, Denmark, and Malmo, Sweden.

“Every summer, from June until October, people interact with water,” said architect Kai-Uwe Bergmann, a longtime Seattleite who has been living and working in Copenhagen for six years.

Copenhagen's progress in making the waterfront welcoming and healthy is due largely to two facts. The saltwater in its harbor is clean enough to swim in — and carefully monitored just to make sure. Also, “everything that touches the water is publicly accessible, by law,” said Bergmann. No exclusive hotels at the water's edge.

Other than these striking differences, there's a lot in common with Seattle in these cities. Copenhagen and Malmo both grew around industrial harbors within a larger, rapidly developing urban area. In their futures, industry of all kinds is going to be cleaner and have a smaller physical footprint. Harbors are no exception.

Container shipping is more modular and efficient than the way things were done historically. But more importantly, in the future we can expect less stuff to be shipped around the world, using less fossil fuels, as we all find ways to live with local products. 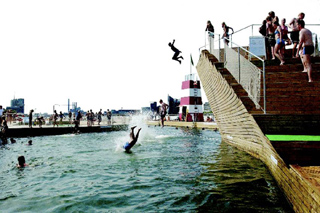 City staffers and officials now are considering more than 30 design teams from around the world who responded to last month's request for qualifications to create a framework of ideas and a plan for Seattle's post-viaduct future.

Bjarke Ingels Group, where Bergmann is associate partner, is among those competing to lead design of Seattle's central waterfront.

Some city staffers, along with people from the Port of Seattle and the design and development communities, will visit Copenhagen, Malmo and Stockholm next month with i-Sustain, a Seattle group that leads tours of sustainable development around the world.

Malmo came to a historic moment in the 1990s. A new crane was installed there, only to be soon lifted off its base and shipped to Korea, where the shipping industry was rapidly expanding. 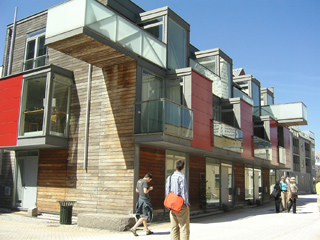 Photo courtesy of i-Sustain [enlarge]
The call to build modest-scale housing like this project in Malmo provides opportunities for architects.

“Prior to development of Western Harbor, Malmo was pretty much like Everett,” according to Patricia Chase, principal of i-Sustain. Malmo is an industrial city close to a much larger one, Copenhagen. Leaders from both cities could have continued to search for the next shipping company or heavy industry, but they saw the writing on the wall. As Chase puts it: “As soon as someone else lowers their tax base, they're gone.”

Malmo and Copenhagen started to think regionally and act sustainably — even cooperating across national borders. Not coincidentally, the two are connected by the Oresund Bridge — Europe's longest combined auto and rail bridge — completed in 2000.

The two cities struck an agreement in which they pool and split port profits, and make decisions about harbor development together. Malmo takes care of the remaining shipping — which it has moved away from the city center — and Copenhagen takes most of the cruise ship traffic. As a result, both have a lot of new land near the urban center.

A landmark tower, Santiago Calatrava's Turning Torso, now rises from the spot where the crane once stood. Malmo has created new open space on its former industrial brownfield, and brought sustainably designed mixed-income, mixed-age communities close to the shore.

Denmark has a strong commitment to weaning the nation off fossil fuels. Bergmann spends a lot of his free time at Copenhagen harbor, getting there by foot, bus or bike.

“Over 30 percent of all commuting to work is by bicycle — and the goal is 50 percent by 2016,” Bergmann said. “Every single year they eliminate parking spaces downtown. They've been doing that for 25 years.” 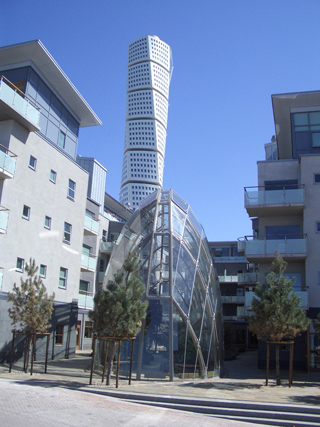 Photo courtesy of i-Sustain [enlarge]
Santiago Calatrava’s Turning Torso tower rises above the Malmo waterfront where a crane once stood. In the foreground is senior housing, with views of the water.

In initial planning for the large harbor, a former mayor of Copenhagen headed a public corporation owned half and half by the city and by the state of Denmark, according to Bergmann. This entity, whose name roughly translates to City and Harbor, commissioned Danish architect Jan Gehl to develop a plan.

Among other priorities, Gehl's commission was to place a number of cultural institutions around Copenhagen's large outer waterway — which is not to be confused with its picture-postcard inner harbor. Bergmann compares the Blue Plan to Seattle's millennium Blue Ring plan for linking downtown places and waterfronts.

A few of these institutional projects — an opera house, library and theater — are now modern landmarks. Housing has followed — notably the conversion of two former grain silos into apartments.

All buildings have limited frontage along the water. Regulations specify that they must be oriented so they are perpendicular to the water — and they open up views to the harbor instead of closing them off, while affording many sightlines to the water from inside the building.

One of the most striking features of the new harbor landscape in Copenhagen is a growing network of bridges that pass low over the water. Bridges and shoreline are increasingly full of pedestrians at all hours, according to firsthand observers.

And then there are the saltwater “baths” themselves — those places where the people of Copenhagen really get into the water.

Parking for waterside attractions is not a big factor. In Copenhagen, relatively few people expect to drive cars in the city. There is lots of public transport, including the water taxis, and the pedestrian right-of-way is well developed. The opera house, which seats 1,800, has parking for 25, Bergmann said. That's right — one stall for every 72 potential attendees.

Luckily, Seattle’s topography will make it easier to transition to pedestrian- and transit-oriented developments. For instance, it is easier to tuck parking unobtrusively into the cliff that runs roughly parallel to the shore, Bergmann said.

Architect, teacher and writer Alex Krieger has written an article called “Remaking the Urban Waterfront” for the Urban Land Institute. He is also part of a team competing for design lead on Seattle's central waterfront. 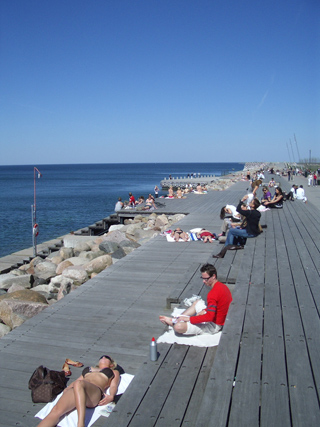 [enlarge]
Residents of Malmo are attracted to sandy beaches along the waterfront. People also like to perch on the more urban elements by the shore, and sit at tables near the cafes.

“Waterfront redevelopments are long-term endeavors with the potential to produce long-term value,” Krieger writes in the article. “Endangering this for short-term riches rarely produces the most desirable results.”

One big mistake along these lines, according to Krieger, is to release the best sites for development first. Mistakes will be made in the first one, and lessons will be learned.

Big mistakes have been made already in post-highway waterfront development. Typically, these are driven by the goal of capturing investment and crowds for underdeveloped land near the waterfront, without regard to the health of urban neighborhoods.

Architect Vaughan Davies of Aecom, a multi-disciplinary design firm which is also on one of the teams competing for the design contract for Seattle's central waterfront, notes that walls against the water — in the form of big hotels and condominiums — are one of the unfortunate results.

Sports venues, which fill and dump out within hours — clogging streets and then leaving them empty — also have not been friendly to urban shore environments, he noted.

These expensive mistakes point to the fact that when it comes to the overall design of the central waterfront, what the plan does not do is just as important as what it does. The right plan will help the city grow and mature into a rich, diverse and sustainable urban environment. The economy will follow.