By SHEILA BACON CAIN
Special to the Journal

As the McGuire apartment building in Seattle’s Belltown neighborhood is unceremoniously dismantled, industry experts are shoring up building codes to ensure the mistakes made in the doomed $32 million structure are not repeated.

Newly written specifications have made their way through a committee within the Post-Tensioning Institute and are expected to soon become part of the American Concrete Institute’s updated recommendations.

Many in the building industry will remember the construction of the McGuire — built at the corner of Second Avenue and Wall Street in 2001. It came on the heels of dozens of other residential towers that helped transform Belltown into a popular urban neighborhood.

Problems began cropping up just eight years later. Carpenter’s Tower LLC, an ownership group formed by Carpenters Union Local 131 and the Multi-Employer Property Trust, sought a city permit to fix problems with the building’s exterior concrete, but the owner’s woes escalated when it was discovered some of the structure’s post-tensioning floor cables were corroding. 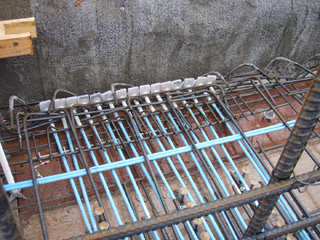 [enlarge]
The ends of these post-tensioning cables are covered with a hard plastic cap and a rubber grommet before they are attached to the structure. This protects the cables and their anchors from moisture, which can corrode and weaken the cables.

It appeared that a system that would have typically been used to seal the ends of the post-tensioning cables, protecting them from water intrusion and corrosion, was not put in during construction. This jeopardized the cables in the exposed exterior concrete frame. Some of the cables rusted, which weakened the structure.

In April 2010, inspectors for the owner concluded that the cost of repairing the defects would be more than twice the cost of the building itself. Even though this finding was controversial, the owner nevertheless asked all residents and tenants to move out by the end of the year.

Thus began lengthy legal proceedings that resulted in the decision to demolish the structure. Demolition of the parking garage and the tower began earlier this year and is expected to take more than a year to complete.

Post-tensioning is a method of strengthening concrete with high-strength steel cables. Greased cables are encased in a plastic sheathing, which is embedded in the concrete beam or floor slab. Once the concrete has hardened, the cables inside the sheathing are tensioned, or “stressed.” This strengthens the concrete and minimizes deflection. The use of post-tensioning is common and has been used for decades in concrete high-rises because it allows for the use of shallower beams, thinner floors and fewer columns.

Typically — and especially in regions where moisture is an issue — the ends of these cables are sealed once the tensioning procedure is complete. Most often, a hard plastic cap with a rubber grommet is fitted over the cable anchor before it’s attached to the structure. Less frequently, the ends are sealed with an asphalt-type paint or similar product. In either method, the cable ends are covered, protecting the post-tensioning cables and their anchors.

In the case of the McGuire, protection to the cable anchors was not put in place.

Once corrosion starts, it’s hard to stop, said Cary Kopczynski, whose Bellevue office designs post-tensioned high-rises in the Seattle area and elsewhere. The firm did not design the McGuire’s system.

“It doesn’t take a lot of corrosion to jeopardize the integrity of the cables,” Kopczynski said. “It’s inexpensive and easy to prevent, but very costly to fix.”

Kopczynski is the chairman of the Technical Advisory Board of the Post-Tensioning Institute, a Farmington Hills, Mich.-based professional association. The board monitors and develops design and construction policy for the post-tensioning industry throughout the country. In the wake of the McGuire, Kopczynski has helped spearhead a change to the building codes as they relate to the use of post-tensioning in concrete buildings.

Existing codes allow specifiers to choose whether or not to include corrosion protection on the anchors of unbonded post-tensioning cable (the type of cable used in the majority of high-rise concrete PT structures). The new code would instead require that the anchors always be protected from corrosion, using a standardized process and components; essentially removing the designer and contractor from the decision-making process.

The committee has encountered a bit of kick-back from the building industry, which argues that dry regions that don’t have any issues with water intrusion should not have to take the extra step of protecting PT anchors from corrosion.

“Moisture can cause problems even in relatively dry climates, and it’s very inexpensive to corrosion-protect the anchors,” he said. “It involves just a couple of additional components, which cost just pennies a square foot.”

The recommendation has been approved by the Post-Tensioning Institute, and has been passed on to the American Concrete Institute, which is expected to include it in ACI 318 — the official building code for concrete buildings. The International Building Code — used throughout the United States — follows the concrete building specifications set forth by the ACI.

Inclusion of the new specification is expected when the revised ACI code is released in 2014.

Sheila Bacon Cain is a Seattle-based freelance writer who focuses on the architecture, engineering and construction industries.