The economic climate has coerced many firms in the A/E industry to re-evaluate their fees. For many, all-out survival is taking precedence over growth and profits.

Despite discouraging statistics, many A/E firm leaders report the recession has encouraged tighter business practices, which should help long-term success.

“There has been some downward pressure on fees, but not very much,” said Jon D. Magnusson, chairman and CEO of Magnusson Klemencic Associates in Seattle. “It is even to the point of clients rejecting occasional efforts of some firms to ‘buy’ jobs. Experienced clients know that demanding fees below the consultant’s costs will only lead to trouble in the long run.”

A recent survey by ZweigWhite — a publishing, education and management consultant to the design and construction industry — shows a slowdown in billing rate increases, an upswing in the number of firms decreasing or lowering fees, and a corresponding lack of growth and profits. The Fee & Billing Survey takes an in-depth look at the fee structures and billing practices of U.S. architecture, engineering, planning and environmental consulting firms across the U.S. 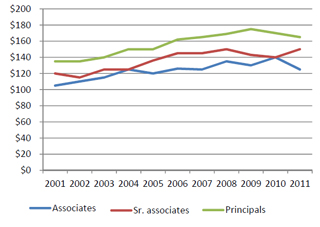 In 2010, in just a single year, the number of firms discounting project fees increased from 65 percent to 75 percent. Most of those were, and still are, made on a case-by-case basis either by lowering billing rates, discounting the final price, or discounting reimbursables. More firms cite the recession as a motivator for clients to ask for, and get, this discount of 27 percent compared to just 8 percent in 2009.

Firms are feeling it necessary to lower fees in order to stay competitive with the rest of the market. In 2011, 70 percent of firms report lowering project fees (73 percent of those who lowered fees did so on a case-by-case basis; 37 percent said they did this because of the recession). Clients are also taking advantage of a known desperation for work, and 19 percent of firms surveyed lowered fees at the client’s request.

“Cash flow from billing is the fuel of the business engine,” says Christine Brack a principal ZweigWhite who specializes in strategic business planning and project management optimization. “When that stream is cut off or constricted, the firm’s financial health is compromised.”

Where fees come from

A/E firms derive their fees on a number of factors.

The 2011 Fee & Billing survey revealed that 79 percent of firms have standard billing rates for each position or status level. Staff members’ time is often charged by the hour under “time and materials” contracts, and even with lump-sum or fixed-price contract jobs, firms may measure profit/loss by charging time against the project at billing rates.

Upper management and those with technology-specific jobs appear to have received the worst of the cuts. Associates have seen a reduction in billing rates. In the 2006 survey, the median hourly billing rate for associates was $126, though this jumped to $140 in 2010, it was reduced to $125 in 2011.

No person, animal, plant or business will grow without some kind of fuel. Without fees that allow firms to make a profit, the percentage of firms claiming growth has drastically dropped off.

Firms concentrating on one particular market sector are reportedly battling it out with the competition, and often the lowest bid gets the job, but there are methods to combat this trend.

Brad Mallory, CEO of Michael Baker Corp., an engineering consulting firm with over 100 offices located across the U.S. and world, said fees at his firm are not really up or down over the past five years.

“We’ve been changing our mix of work, so we are more diversified,” he said. “The focus we’ve put on design-build has allowed us to sort of, frankly, tinker our fee structure in a positive way. There is more potential for fee erosion than you may think. But I think we’ve managed to largely avoid it.”

Christina Zweig writes for Structural Engineer Magazine, CE News and TheZweigLetter (ZweigWhite’s weekly management publication for the architecture, engineering, planning, and environmental consulting industry). She is based in ZweigWhite’s Fayetteville, Ark., office. ZweigWhite has other offices in Chicago, Durham, N.C., and Natick, Mass.