For many of the patients who use Northwest Kidney Centers’ new Renton clinic, watching television provides an entertaining way to pass the time during their three-times-a-week, four-hour dialysis sessions. Most don’t realize that the clinic used to house a local television broadcasting studio.

The new 21,000-square-foot dialysis center at 602 Oakesdale Ave. S.W., in Renton’s Oakesdale Center business park, is in the former studios of KSTW Channel 11. 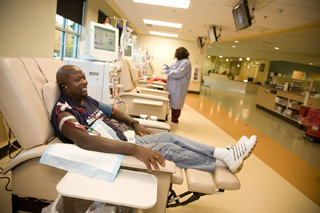 The facility, which opened in 2011, is also Northwest Kidney Centers’ new south King County hub to train and support people who give themselves dialysis treatments at home. Converting the former television studio to a dialysis clinic offered several opportunities and challenges.

Our initial intent — and that of architect Clark/Kjos and general contractor Aldrich and Associates — was to salvage as many features from the 2002 building as possible.

The building had a robust data and information infrastructure that included a raised-floor data shop. It had air-cooling units inside as well as a large conventional unit on the roof.

The space was carved into several different spaces used for broadcasting, technical support, and offices and meeting rooms. Unfortunately, once we started seriously planning the space, we realized we didn’t need most of what was left behind, we couldn’t reuse it or it was in the wrong spot.

Northwest Kidney Centers configures our dialysis treatment facilities with large open spaces so our nursing staff can maintain eye contact with all the patients as they receive dialysis treatment. We use a lot of glass so sight lines are unobstructed. 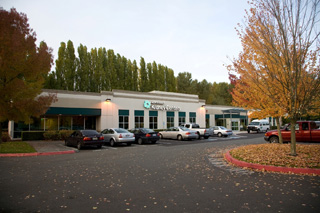 We were lucky that the entry was in the middle of the building. We modified it with a canopy to protect patients from the weather when arriving or departing.

A small loading dock existed on the west side of the building, which we easily expanded to accommodate the large amount of materials needed for our operations. A bonus was the diesel-powered generator at the rear of the building, similar to ones we have installed in our other facilities, that was left behind by the television station. This generator can provide continuous power so life-sustaining dialysis can continue even if regular power is out.

We traditionally pack a lot of items — including air ducts, power and data circuits — above our suspended ceilings. Fortunately there was a high roof deck to accommodate those needs. There were also existing data racetracks above the suspended ceiling that we were able to use.

Plumbing infrastructure is significant in dialysis. Each dialysis center includes a water treatment plant with two alternating reverse osmosis units that are downstream from a whole cadre of water treatment components. Water must be treated before it’s used in the dialysis machines, and the system can consume 12 to 20 gallons per minute depending on demand.

Drain lines are always a challenge and that was true here because the building is slab on grade. All drain lines had to be saw-cut below the slab and installed 5 to 6 feet deep, backfilled and re-covered.

We also installed a medical gas system to make oxygen available at all of our treatment stations. In addition, we have a low-voltage infrastructure that feeds each patient station. There is an emergency nurse call system, patient TV system, Internet access and overhead radiant heat panels in the ceiling for patient comfort when needed.

This project came in about 5 percent below budget and almost one month ahead of the six-month schedule, allowing us an extra month to comfortably train our staff and test our systems before opening to the public.

Our former dialysis center at 4242 East Valley Road in Renton, which we acquired in 1986, had become too small for our patient load. We’re now using the lower floor as the dispatching hub for dialysis nurses who give treatments in local hospitals. The upper floor is available for other purposes.

Meanwhile, we plan to open a new dialysis center in Enumclaw early in 2013 in a building formerly used by the state Department of Natural Resources, and we’re refurbishing our 40,000-square-foot Haviland Pavilion at 700 Broadway in Seattle to be a world-class resource center for kidney patient care, education and research. That’s a major remodel on a building we purchased in 1979.

Kidney disease is a fast-growing health challenge in King County and throughout the United States. One in seven American adults is currently affected, and most don’t learn they have a problem until the damage is severe.

Without working kidneys, a person can stay alive only a few weeks unless he or she receives regular dialysis or a kidney transplant. Our nonprofit organization provides the majority of dialysis care in King and Clallam counties, educates the public about kidney health, and collaborates with University of Washington Medicine in the Kidney Research Institute.

The new Renton facility is one of our 14 dialysis centers. This year Northwest Kidney Centers is celebrating 50 years since its founding as the very first out-of-hospital dialysis organization in the world.