As health care needs throughout the country continue to skyrocket, more and more hospitals are expanding their facilities to meet increased demand.

However, many health care facilities are located on urban campuses that are composed of a wide range of complicated and interconnected services and buildings. This presents special challenges for contractors who are tasked with constructing complex medical facilities on top of or next to active hospital buildings that must keep operating and allow access during construction.

This was the case at the University of Washington Medical Center, where Skanska was hired to add more than 273,000 square feet of expanded facilities on a medical campus that employs more than 4,000 people and serves more than 20,000 patients annually. The expansion, which opens in October, will provide a new neonatal intensive care unit and a 32-bed bone marrow/oncology unit, diagnostic imaging and future operating rooms.

Long before a shovel ever hit the ground, it was critical that the construction team had a thorough understanding of how the expansion project was going to affect the hospital, the campus community and several sensitive neighboring facilities. During the entire construction period access needed to be maintained for doctors, patients, employees and students. And it was imperative that critical hospital operations such as the mechanical, electrical and communications systems were not interrupted.

One of the first steps was relocating the hospital’s supply of oxygen, which had to be moved to accommodate the new expansion. There was a considerable effort to work with the hospital to ensure that every step of the transition was completed in a way that did not disrupt patient care. 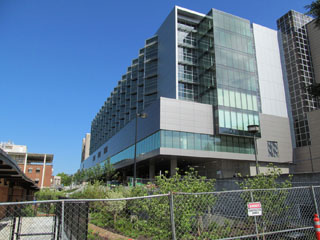 Photo courtesy of Skanska [enlarge]
The expansion was built around a two-story fire command center that had to remain operational throughout construction.

Similarly, the hospital’s loading dock had to be relocated. It’s easy to think it would be as simple as building a new loading dock and closing the old one until one considers all the items a hospital needs, such as hazardous materials pickup, linens, food service and medical supplies. This required constant communication with all of these suppliers, keeping them up to date not only on schedules but new traffic patterns and site features to avoid a gap in service.

Maintaining excellent patient care was a top priority for the University of Washington during the expansion.

The construction team had to carry out excavations and create difficult tie-ins to the exiting building. It was critical that the team conduct noise and vibration studies ahead of time to determine how their work would cause vibration, dust and other problems that adversely affect delicate surgery procedures.

To minimize these issues, the construction team renovated several existing operation rooms, allowing more sensitive procedures to occur away from construction. Also, construction work shifts were changed so that they occurred during down times in the operating rooms.

It was also necessary for the construction team to maintain access to the existing facilities during all phases of the project. This meant significant work had to be done to ensure consistent access while also creating a safe environment.

For instance, across the street from the project is UW’s Center on Human Development and Disability and the Experimental Education Unit. The building is central to the university’s research program, and also treats and cares for many special-needs children.

Access to the building was located on a roadway that had be realigned for the expansion. This required the school’s main entrance to be relocated and a new entry to be built that is accessible to people with disabilities.

A significant aspect of the entry relocation was moving the school bus drop-off from one side of the building to another. The change required special permitting and changing a one-way street into a two-way thoroughfare.

The team had to design logistics and fencing plans that would not only keep the school and other neighboring facilities separated from the job site and accessible during work hours, but would also provide access to fire-response and other emergency services.

The design required the existing two-story FCC not to be altered while the new tower was being constructed around it. This was a daunting task given that the FCC was located within the foot plan of the new tower. Even more challenging was that the FCC needed to be accessible 24 hours a day by the Seattle Fire Department as well as facility operations and maintenance staff.

The construction team had to ensure the new work could be built into the existing building while creating temporary bridges over the excavation. They also constructed rated hallways through the adjoining cafe and the medical center’s primary conferencing areas in order to maintain accessibility.

Hospitals are one of the most complicated structures to build, requiring an enormous amount of site preparation that needs to be coordinated before construction can even begin. But when a general contractor takes the time to understand the competing requirements and priorities it is possible to ensure the hospital’s needs are met before and during construction.

Rob Robinson is a Skanska project executive overseeing the construction of University of Washington Medical Center’s expansion project. Robinson has more than 23 years of health care and GC/CM experience.