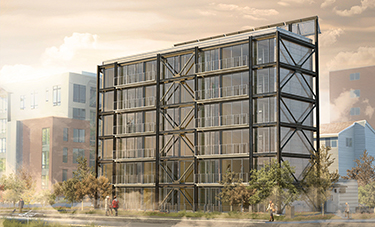 Rendering by Matt Grunert/CollinsWoerman [enlarge]
47+7 is a pilot housing project in Seattle’s U District that uses modular construction that reportedly reduces construction time and cost.

Q: Seattle has had an apartment boom. What is the next hot sector?

A: Increased national and international investment in the region means that all sectors (commercial, residential, retail) are gaining traction.

We are already seeing increased demand for office space for the technology sector. Larger firms like Amazon and Google are creating new experiential campuses in the urban cores of Seattle and Bellevue, but smaller start-ups are also looking for spaces that promote creativity and collaboration.

To date, a lack of financing and onerous state laws regarding the construction of condominiums has limited the supply of new vertical for-sale product that has created a pent-up demand for that type of housing. This will drive the market’s response for several years and condominiums being converted from apartments will likely be the first wave in the market. Beyond the rush to be first to market, conversions also can mitigate the liability typically associated with the development of new condominium product.

Also, the proliferation of online shopping is redefining the retail market. Destination or experience-driven retail environments are the wave of the future. As retailers integrate entertainment and interactive experiences into their retail environments, developers are converting existing properties or building new amenities to better accommodate new features.

A: As construction and land development costs increase, they are passed along to the consumer at every level in the form of increased rents, operating costs and expenses that ultimately either drives up wages or forces workers farther from the urban centers. In addition to rising land and construction costs are the ever-increasing costs imposed by city, county and state governments for basic services, infrastructure, affordable housing, and transportation in the form of fees, charges, etc. All of these combine to broaden the gap between those who can afford to live and work close-in and those who cannot.

Q: What are clients/customers asking for now versus five or 10 years ago?

A: The market is already responding to a critical need for market-rate housing for employees in the technology and professional services sectors. However, in general there is an increased demand for properties with integrated technology; convenient access to entertainment and transportation options; sustainability initiatives and materials; and access to social interfaces and opportunities.

Q: What is Sustainable Living Innovations and how are sales going?

The SLI technology blends the flexibility of “kit-of-parts” components with modular construction. The building systems — pre-wired and pre-plumbed wall and floor panels, cabinets and roof panels — can be assembled locally and connected at the construction site to the structural frame with bolts. The electrical and plumbing contains “quick connects” between panels for ease of assembly. Due to its simplified technology, interior finish packages are installed on the lower levels as the shell of the building is being completed on the upper levels.

In Seattle’s University District, SLI has a pilot 24-unit apartment project called 47+7 under construction. Each floor of the six-story building is estimated to take a week to complete. The project is slated to be done in December.

Q: Tell us about your joint venture with Intellectual Ventures. Is the technology being used now?

A: Our joint venture — called Innovative Building Technologies LLC (IBT) — was announced in September. IBT’s purpose is to commercialize new inventions for the design and construction of mid- and high-rise housing from a kit of prefabricated component parts. Sustainable Living Innovations LLC has the exclusive license to deploy the technology in the North American market. The first project using the IBT technology is the 24-unit apartment building mentioned above.