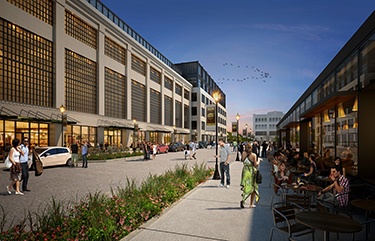 Image from Walker Macy [enlarge]
Walker Macy is working on the Willamette Falls Legacy Project, which envisions a downtown hub of shopping, business, housing and tourism in Oregon City.

Like many designers, Doug Macy wants to make a difference with his work.

Since the mid-1970s, Macy, a principal with the Portland firm Walker Macy, has strived to push himself and his colleagues to take on greater challenges while growing the firm.

“Part of our success has been that we’re not afraid to take chances,” Macy said. “Our whole philosophy has been to work on projects that really make a difference in communities.”

Macy said a majority of his firm’s work in recent years has been in the public sector — a trend brought on by the recession that began in 2008. The work that was common during the housing boom of the mid-2000s, such as high-end multi-housing projects, has been slow to return, Macy said. That is especially true in the Portland market.

“There’s a lot more things being built in the private sector in Seattle than in Portland,” he said. “That wasn’t the case in 2008.”

But the drop-off in private work has been offset by the increase in public work. “A lot of public agencies are coming out of the woodworks,” Macy said, referring to state and city agencies that are calling for landscape architecture firms, both in Portland and the Seattle area.

The firm has completed landscape and master plan design projects at the University of Washington, Portland State University and Lewis & Clark College in Portland. But it has also expanded out of the Northwest to do campus planning for University of California Riverside and UC Santa Cruz.

Macy, who worked on the design team for Portland’s Pioneer Courthouse Square, also known as the city’s “living room,” said his firm has gone after high-profile, out-of-state civic projects by parlaying its experience on well-known Portland projects. “Our experience makes it possible for us to beat other national firms,” he said.

The firm this summer opened a Seattle branch, with two designers. Macy said the branch will give the firm “a lot of technical depth to take on multi-million-dollar projects” in the Seattle area. Even before opening its Seattle office, Walker Macy had completed work on the University of Washington’s Bothell campus master plan and several UW main campus projects, such as landscape design for Discovery Hall and the Molecular Engineering Building.

“It’s nice to be in Seattle,” he said, referring to the firm’s new office. “It’s such a vibrant city.”

Having co-founded Walker Macy in 1976, Macy said the drives to “work hard” and “make cities better” have been behind the firm’s growth. “It’s been a long and interesting road,” he said. “We’re very pleased with what we’ve accomplished over the years.”