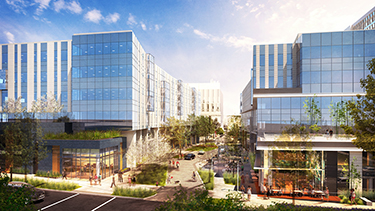 Managers at Graphite Design Group answered questions from the DJC about local development and industry trends.

Q: Seattle has had an apartment boom. What is the next hot sector?

A: Although a step or two behind the apartment boom, the commercial office sector is seeing tremendous growth in the speculative and build-to-suit arenas. As these new projects come online and large employers such as Amazon.com occupy new space and current leases expire, the commercial leasing market will see a notable reshuffling. This will drive property owners to focus on repositioning and updating existing properties, as well as an expansion of amenity offerings to attract and retain tenants.

Increasing density of the office environment will also have a ripple effect on the retail and service sectors, as neighborhoods such as South Lake Union, which do not have an established retail infrastructure, capitalize on an influx of potential customers.

In the residential market, a trend towards larger two- and three-bedroom multifamily units may emerge as couples with growing children look for options to stay in the city center.

A: While land and construction costs may slow development over the near term and discourage some investors (particularly those new to these markets), it should have a negligible effect on long-term growth. Location is still paramount, and Seattle and Bellevue will continue to be desirable for a young, educated workforce and, in turn, employers.

We may see increased efforts to assemble property to develop larger, more ambitious projects that require more upfront capital, but spread development costs over a larger product base and consolidate entitlements. The downside to this trend may be an aversion to explore more complex project types such as mixed-use or public-private partnerships, as the risk threshold may be too high.

Q: What sustainable elements have you introduced into your projects?

A: In Seattle, we are all seeing the effects of the recently increased energy code requirements, especially as they affect building envelope performance. In response, we have been working with our clients to prioritize higher performing cladding systems that often have a direct impact on the building aesthetic.

In the Denny Triangle, our 27-person firm is involved in a number of projects that will take advantage of the developing district energy system, where waste heat produced by high-intensity users such as mission-critical facilities is directed toward and used by nearby projects to offset their energy requirements.

Q: What are clients/customers asking for now versus five or 10 years ago?

A: The trend toward desiring a more “authentic” urban experiences continues. Tenants are willing to sacrifice square footage for proximity to the urban center and the retail, transit and cultural offerings these locations provide.

Where multi-building users once wanted a campus, now they want a neighborhood. They value diversity, eclecticism and choice. Rather than, and often in addition to, investing in on-site offerings such as cafeterias, health clubs, daycare centers — often only available to tenants — building owners are asking that more space and design attention be committed to high-quality retail venues and letting the marketplace provide these amenities to their employees.

Companies such as Amazon.com realize that their employees value the diversity and connectivity that an urban location affords and want to build this into buildings on day one.

Q: What can architects and developers do to make cities such as Seattle and Bellevue more livable?

A: Ultimately, the livability of our cities depends on the quality of the urban environment and those transitional spaces that residents and visitors experience as they move between where they live, work and play.