A tree is growing on Roosevelt Way. The artwork of renowned local artist Nikki McClure adorns the newly opened Marion West building in Seattle’s University District. Larger than life — the metal water-jet design measures 32 feet wide by 14 feet high — the artwork represents everything this development means to its community.

Describing the art installation, McClure said, “I thought about how an apple tree ages and is taken care of by many people over a long period of time. It represents care, habitat and support.”

The Marion West is all this and more to its community — providing food justice, affordable housing and investment in social equity.

The four-story Marion West provides 20 units of housing for formerly homeless young adults, 28 units of workforce housing, and an on-site manager’s unit. The building houses a street-level food bank and coffee shop to provide food justice and job training. The food bank includes a teaching kitchen, and a 7,400-square-foot rooftop deck is dedicated to the production of food. Social services are also provided on-site. 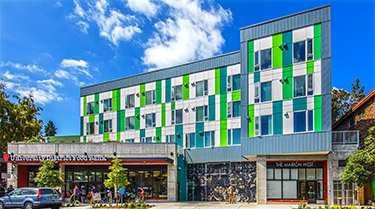 In an era of rapidly rising housing costs, the project allows those who would otherwise be pushed to outlying neighborhoods to remain in the University District, where they may already feel a sense of community and can easily access employment, health care, education opportunities, healthy food choices and job training.

The Marion West accomplishes this proudly, making a visible design statement that investment in the community should be celebrated.

Located adjacent to the historic University Branch Public Library, the design respectfully angles its mass back from the street, opening up to the library’s lawn. The Street Bean coffee shop is strategically located at the corner adjacent to this lawn and includes large roll-up glass doors on its south side to take advantage of sunny days.

The building colors represent a modern response to the historic library, with its pale white base and play of blue-green accents. The food bank, with its glassy storefront, comes forward to meet the street with a complementary angle of its own to create a grocery-store-like shopping experience. 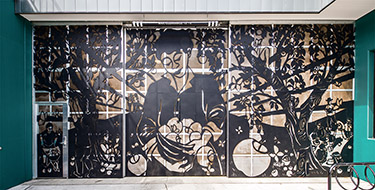 [enlarge]
Nikki McClure created this artwork that symbolizes the support needed for an apple tree as it ages.

A home for services

For more than 30 years, the University District Food Bank operated out of an 800-square-foot church basement behind an anonymous door. With its space tripled in size, the food bank today realizes its goals of providing barrier-free access to healthy food in an experience that emphasizes choice and dignity.

With its own rooftop food production, the food bank can now be assured of a supply of fresh produce. When construction costs forced the food bank to eliminate the galvanized metal planters, the food bank mobilized its volunteers to assemble 2,000 milk crates into planters.

Operating the corner cafe, Street Bean is a nonprofit organization focused on providing job training for young adults on the streets. The group focuses on both the specific skills needed to be a great barista as well as the soft skills needed to maintain any type of longterm employment, such as communication, self-governance, collaboration and work ethic.

Street Bean supports the community on multiple levels — providing a welcoming place anyone may enjoy a good cup of coffee while supporting at-risk young adults.

YouthCare is an organization dedicated to bringing homeless youth off the streets and preparing them for life. The young adults living on the second floor of Marion West were previously homeless and are now transitioning to independent living. Residents are required to work or attend school and pay only 30 percent of their income in rent. The residences include a computer lab, classroom, community kitchen, laundry and counseling offices for YouthCare’s support services.

Seattle’s current housing and livability discussion is centered on affordability. Yet, this discussion would be incomplete if it did not acknowledge the historic racial inequities of Seattle’s past. Sharon Lee, LIHI’s executive director, chose to spotlight a simple citizen, Marion West, who with her husband, Ray, took a stand against segregation in the University District. 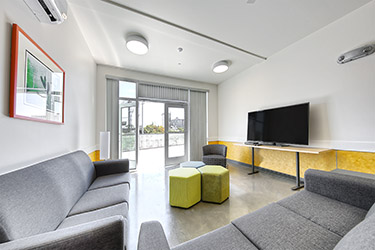 [enlarge]
Lounges are provided for residents of Marion West.

Eventually their family was forced to leave the neighborhood due to the bitter enmity of neighbors, including a burning cross on their lawn in 1958. Marion and Ray, who passed away in 1992, continued to remain active in housing and employment justice issues throughout their entire lives, with groups such as the Christian Friends for Racial Equality and Seattle CORE, precursors to the activism of the 1960s.

Half a century later, at the building’s grand opening last June, Marion West inspired all those in attendance with her keen sense of social awareness: “I speculate that the people who will live here will have a few cracks in their lives. By giving them this ground to stand on they will have an opportunity to fill in those cracks and help create a more equitable society.”

This brings us back to the poetry of the apple tree and the themes of “care, habitat and support.” The Marion West embodies the care of the various partnerships in developing this project, the enrichment of the habitat and community that the project will provide, and the support of the people whose lives are touched by this project.

Michele Wang is a principal at Runberg Architecture Group.