Our national infrastructure is failing. Bridges, dams, roadways, energy grids and more are deteriorating before our eyes, and yet many outside the engineering industry may not even be aware of the potential infrastructure disasters looming on the horizon.

Engineering professionals like myself bear some degree of responsibility. Firstly, we need to do a better job of informing the public of the risks facing infrastructure, and the investment needed to mitigate them. Secondly, we need to reevaluate traditional safety-analysis approaches and embrace new analytical methods, such as performance-based engineering (PBE), so that we can improve the long-term reliability of new and existing infrastructure designs as our aging structures are retrofitted or replaced.

We can never make our infrastructure perfectly safe, but by shifting our approach, we can make it more resilient.

The current state of infrastructure in the United States is the result of several related factors. Broadly speaking, federal and state governments haven’t invested enough in the upkeep, repair and replacement of the transportation, utility and energy infrastructure that we so often take for granted. 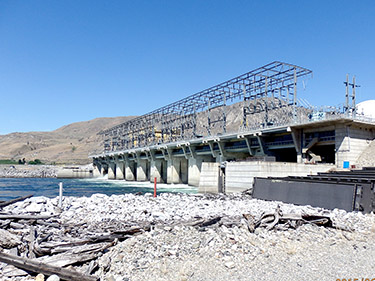 Photos courtesy of GeoEngineers [enlarge]
We rely on infrastructure, such as Wells Dam along the Columbia River, for basic services such as power and transportation. How we invest in our infrastructure to keep it safe and efficient is an ongoing challenge.

Our infrastructure is ranked 15th globally by the World Economic Forum and unless increased funding is approved, there’s a risk of falling even further behind. Much of our current infrastructure was built during the post-New Deal boom of the 1930s, 40s and 50s, and now is in desperate need of replacement or overhaul. The American Society of Civil Engineers estimates that we need to invest $3.6 trillion in infrastructure before 2020 in order to make the U.S. safe and competitive with other developed nations.

We’re also facing an increasingly unpredictable world. Destructive weather events are becoming more frequent, putting more stress on our aging structures than they were designed to withstand. Designing infrastructure for 100- or 500-year storm events may no longer be advisable if recurrence rates are increasing.

Although traditional force-based and factor-of-safety analysis approaches are often still the required regulatory standards, those with an eye toward the future should consider alternative approaches to risk-based analysis and designs.

Using a performance-based approach to risk replaces absolute factor-of-safety standards with a more robust strategy for building resilient infrastructure. PBE evaluates the reliability of the design by considering a variety of real-world loads and conditions a structure is expected to face instead of just one design load and condition.

This can also lead to increased efficiency and decreased cost. Funds which might have been needed to build a structure to a rigid, and sometimes unnecessary, factor-of-safety standard can be reallocated to address more meaningful risks.

No prediction can be perfect. PBE is probabilistic. By predicting a structure’s performance, we can evaluate risk factors over its entire life cycle and incorporate the consequences of various types of structural failure. These estimates of the annual probability of failure for a given structure, and associated consequences, give infrastructure owners and managers valuable data they can use to make safety and business decisions.

With a grounding in these more vigorous design approaches and methods, we can help make the next wave of infrastructure built in the U.S. resilient, affordable and safer. 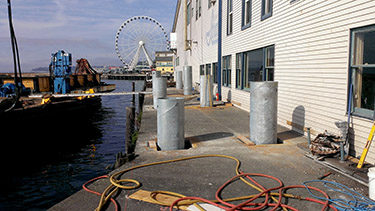 In many areas of the country, including the Puget Sound region, aging infrastructure such as dams and bridges are particularly vulnerable to earthquakes. Performance-based engineering finds a natural application in the area of seismic risk analysis and design. Of course, the specifics of any particular project should determine the approach, but generally speaking PBE can offer the following advantages:

PBE can be especially valuable when dealing with soft ground sites in seismically active regions.

Working at soft ground sites can be very challenging for engineers. Soft soil is vulnerable to liquefaction, meaning saturated granular soil can destabilize and actually behave as a liquid under certain conditions, such as earthquakes.

In these more complex conditions, conventional force-based and factor-of-safety analysis approaches often aren’t adequate to develop a design that performs satisfactorily. In order to reliably evaluate the performance of an engineered system in soft soil, a performance-based engineering approach and analysis is key.

An excellent example is my recent work on the seismic renovation of Pier 54 on the Seattle waterfront. It’s a 100-year-old wooden pier, and, realizing it was vulnerable to earthquake damage, the owner contracted with Reid Middleton and GeoEngineers to reinforce the pier against seismic activity.

A traditional factor-of-safety modeling approach wasn’t possible for the pier because it would have had to reconcile existing wooden piles with the new steel piles being used for reinforcement — two structures with very different stiffness and loading characteristics. Instead, our team used a performance-based engineering strategy for the model, which allowed us to consistently analyze how the two types of piles would interact. GeoEngineers then introduced various types of earthquakes into the model to simulate the soil/pile interaction in each case.

Of course, conventional seismic analysis methods can still be used for soft soil sites. But often the nuances of soil-structure interaction are difficult to accurately predict with a one-size-fits-all approach.

When combined with advanced numerical modeling techniques, PBE can provide much deeper predictive insight into how a structure might react to specific stressors, and ultimately help the U.S. achieve a more robust and resilient infrastructure network moving forward. 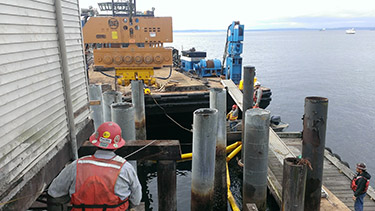 [enlarge]
By taking a performance-based engineering approach at Pier 54, the GeoEngineers team was able to model the interaction between wood and steel piles with the potentially liquefiable soil in which they would be anchored.

We are making some small steps in the right direction. Just last month Congress passed the Water Resources Development Act of 2016, which addresses dam, waterway and water system infrastructure. Primarily, it authorizes the Army Corps of Engineers to begin renovation work on a wide variety of projects, and allocates $9 billion to help fund work on inland waterways, dams and levees. This is great, but it’s a drop in the ocean compared to the estimated $3.6 trillion in necessary funding.

We must also recognize that no amount of money can make our infrastructure perfectly safe. We always face risks for any dam, bridge or other structure. Instead of thinking about safety, which is difficult to measure and quantify, we should be striving for resiliency.

If we use engineering methods such as PBE, we can achieve structures designed with specific tolerable risks in mind. Structures resilient enough to withstand what nature may throw at them, and with carefully managed consequences if failures do occur.

The more attention we can bring to our collective infrastructure challenges the better. This isn’t just an engineering problem, it’s an American problem. Investing now in new or overhauled infrastructure, while using the best possible approaches to design it safely, will pay dividends over the coming century. It’s an investment in our future — and one we must make soon, before it’s too late.

King Chin is a geotechnical engineer with GeoEngineers who has been providing geotechnical services for projects across the U.S. and around the world since 1998, with an emphasis in performance-based engineering on soft ground sites and in seismic regions.