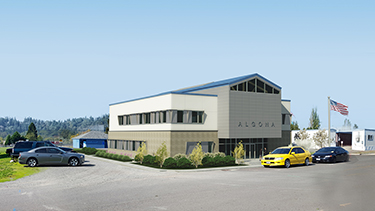 Specialty: Architecture, civil and structural engineering, land use planning and interior design for these markets: housing, aquatics and recreation, industrial distribution and manufacturing, and federal Department of Defense

Innova opened toward the end of the Great Recession. It now has a staff of 20, but CEO Paul McCormick said it works on projects that are typical of a much larger firm. This is because its leaders owned or were principals or managers in large firms.

McCormick said Innova has big plans to grow. Here are his answers to a few questions from the DJC:

Q: You’ve worked on a number of industrial projects. What’s new in that market?

A: The Puget Sound industrial sector has been booming for four years. In 2012 and 2013 national real estate investment trusts partnered with local developers to develop speculative space. That was needed to launch the slow market as local developers were not willing to take the risk.

Today, the space has been filled and developers are building with more confidence and are taking more risks because the pace and size of the leases has picked up.

Innova provides engineering and architectural design and entitlement services to developers in this sector. Last summer, Innova had 11 designed projects under construction and 11 in design. Those projects were leased to companies that include Milgard Manufacturing, Helly Hansen, Pet Foods Experts, Washington Tractor/John Deere and Food Lifeline.

Q: What challenges and trends are you seeing?

A: For the industrial sector, the trend is to continue building more space. The challenge is to find good land in the right places, and at the right prices to make projects financially feasible. Innova assists owners and developers in creating successful projects by helping them obtain permitting approvals on challenging sites that previously were thought to be undevelopable, for instance because of steep slopes, wetlands or adverse zoning.

Innova has the relationships to sometimes put business owners who want new buildings or to lease more space together with developers to jump-start projects. Those are the two most risky items for developers: not finding tenants for their new buildings or not getting government approvals in time to meet critical deadlines.

Q: What will be the hottest market in Pierce County in the next few years?

A: Housing is and will continue to be. The apartment market is booming, especially in Tacoma.

Innova has had a Tacoma-based affiliated real estate company for the last nine years that develops, owns and operates apartments, a market that has exploded since 2015. Rents have risen to the point that new development makes sense.

Federal Department of Defense work at Joint Base Lewis-McChord is another sector that has grown over the last few years, and we expect it to continue to grow. Innova has ongoing open-ended contracts for design work at the base.

Q: Your firm does a lot of different types of projects. Has that helped or hindered you?

A: Our diversity has been an asset. Innova’s vision is to work in multiple market sectors, with different managers championing each sector. In 2016, our revenues are nearly split between private and public projects. This makes for great company stability when one sector crashes, but the others remain strong.

Our team members have worked for decades in what we call our areas of specialization: housing, federal defense work, industrial, aquatics and recreation.

Q: What can designers, developers and government do to make Tacoma more livable and sustainable?

A: Tacoma is already amazingly livable and is becoming more sustainable each day. Any other perceptions about it stem from a false understanding of what Tacoma is today.

The city and the many agencies and public and private groups who live and work in Tacoma have improved it in the last 15 years so it is one of the most opportunistic cities I can think of. Tacoma offers the Sounder train to Seattle, a light rail link from the Tacoma Dome area into downtown every 15 minutes, and the soon-to-be-expanded Martin Luther King mixed-use district.

The UW Tacoma campus has 4,800 full-time students and expects to expand to 7,500 over the next four years. New apartment projects to open in the next 12 to 24 months in Tacoma include: phase two at Proctor Station, Stadium Vue35, Stadium Apartments at 102 N. G St., and Marc on the Ave. at Sixth and Alder.