Each September Occidental Square is home to the Seattle Design Festival, an annual event featuring creative displays representing some of the pressing issues facing the design community.

Last year, Seattle-based Olson Kundig contributed a temporary installation called “Ice Cube,” a 10-ton block of ice that slowly eroded in the sun. The cube was a beautiful visual spectacle about the inevitable passage of time. The public was encouraged to interact with the ice and impact the melt through the warmth of their touch. After a few weeks in the sun the monolithic block was no more than a puddle.

The reality of global ice melt was brought all the way from the Arctic to Seattle’s front door.

As another year passed and the season of Seattle Design Festival planning reemerged, it became clear that an opportunity was waiting to showcase an actionable solution that the design community could adopt and rally behind to slow the metaphorical ice melt. 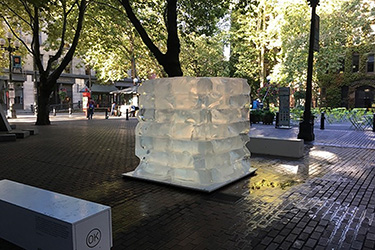 The city of Vancouver, B.C., had recently completed a month-long installation where two boxes were each filled with blocks of ice and left outside in the summer sun. One of the boxes was built to the mandatory code standard and the other to a high-performance building standard called Passive House.

They called it the Ice Box Challenge and asked the public to guess how much ice would remain in each box at the end. It was a huge success and received a great deal of public interest.

Through coordination between the organizations Passive House Northwest and Passive House Canada, our team brought the boxes to this year’s Seattle Design Festival. We craned them into place in the same location as last year’s Ice Cube for the month of September. Each box was outfitted with two windows that allowed people to sneak a peek at the progress of the ice melt. Educational infographics introduced readers to the concepts of high-performance building and explained the differences between the two boxes.

An important distinction between the two was that all joints in the exterior plywood of the Passive House Box were covered with air-sealing tape. This assured that the envelope didn’t leak at common places where drafts occur, like at windows and baseboards. The Passive House Box also featured triple-pane windows instead of the Code Box’s double-pane.

This public science demonstration made it strikingly clear that Passive House produces results that are too good to ignore. With simple upgrades in construction methods the same structure can use 50 percent less energy than a code-built building, sometimes less. This level of efficiency makes these buildings zero energy-ready. Add some renewable energy generation and you’re there. 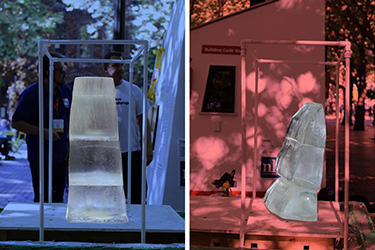 Photo courtesy of NK Architects [enlarge]
The frames around the remaining pieces of ice show where each of the cubes started. The Passive House Box is on the left.

Passive House is achievable and straightforward. It comes with scientific tools that allow you to check design decisions against their performance and all but guarantees predicted performance will match actual performance. Because Passive House is a performance-based standard and not a prescriptive standard, it can adapt to any climate, market, or building type and still achieve results like this.

So here are the four things architects can start doing now to get closer to these results:

1. Choose energy early on. The earlier high-performance becomes a design parameter in a project, the easier it is to keep costs down, overcome learning curves, and keep systems working together as effectively as possible.

2. Collaborative team efforts. Interdisciplinary communication and collaboration can be very powerful when all disciplines prioritize energy. Innovative solutions to project-specific problems are much easier to solve with every player at the table working together in the name of high-performance.

3. Don’t ignore the bridges. Every instance of connection, change in material, or change in plane in a building is a thermal bridge. Heat transfer modeling tools can be used to study each bridging condition and find the best compromise between constructability, performance and beauty.

4. Use Passive House principles. Continuous insulation, thermal bridge-free design, passive ventilation, high-efficiency heating and cooling, air-tight construction, and quality windows are all tools that can be used in a high-performance building.

The power lies in us (architects) to design buildings that reduce energy use, lessening the carbon emissions that warm the planet. We can literally and figuratively stop the ice from melting.

Brittany Porter is a project architect at NK Architects.