Get ready for the new year — and new energy codes

At the stroke of midnight on this New Year’s Eve, construction in Seattle will transform yet again.

The 2015 Seattle Energy Code, one of the strictest energy codes nationwide, will come into full effect on Jan. 1, 2018. With the final provisions of this code cycle in effect, building owners and developers in Seattle must analyze additional tradeoffs and make tough design decisions.

Many energy code changes came into effect when the 2015 Seattle Energy Code was officially enforced in July. This article provides a simplistic overview of the final major changes coming in January.

Most people think of the energy code in terms of measures that must be implemented. For example, all buildings must have an R-40 roof or a boiler that is at least 80 percent efficient. In the January version of the code, two important prescriptive changes occur.

First, the maximum allowable lighting power densities (or the installed lighting watts per square foot) decrease another 10 percent below the July 1 levels. It’s easy to hit this target with LED lighting, but don’t count on being able to easily exceed it.

Both changes will further drive down the energy use of Seattle’s new building inventory, though at an increased initial cost.

However, the prescriptive path is not the only option. Any project can also opt for either the total building performance (TBP) path or the target performance path (TPP). 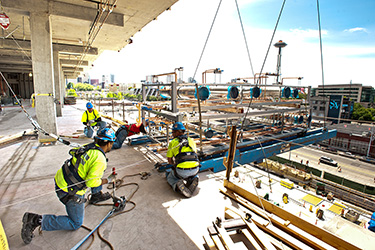 Photo by Nate Watters [enlarge]
Changes to the 2015 code create incentives to collaborate early on projects, like this multi-trade rack getting installed in a research building in South Lake Union.

With total building performance, project teams must design a building that is 13 percent more efficient than a theoretical reference building designed to meet the prescriptive code. The challenge post-Jan. 1 is that the prescriptive changes described above (reduced lighting power densities and triple-pane glass or heat pumps) now also apply to the reference energy model. Designing a building to be 13 percent better than a now super-efficient reference model is that much tougher.

Energy models are used to simulate building energy use of the reference building and the proposed design. To prove compliance, significant architectural, electrical, mechanical and energy modeling documentation (more than is required for LEED certification) must be submitted to and approved by the city.

The benefit of TBP is that it offers owners flexibility in what features can be installed in a building. While many of the mandatory measures still apply, owners have flexibility on many items including glazing quantity, glazing type, lighting, mechanical systems and renewables.

However, given the efficiency of the reference model and a new TBP penalty for buildings with more than 45 percent glazing, it will be challenging for TBP projects to veer too far off course from prescriptive designs.

The target performance path was introduced in the 2012 code cycle but owners haven’t shown a lot of interest in this code path until now. With TPP, an energy use intensity target is code-determined based on the building type. For example, an office building must hit an EUI target of 40.

The catch: Not only must the team design the building to hit an EUI of 40, but that performance must be proven during 12 months of consecutive utility bills within three years of building occupancy. Introducing this operational reality into the design process translates into several “do-differents.”

First and foremost, owners must be willing to accept the financial risk of this pathway. If the energy target is missed by 30 percent or more, the owner must pay a maximum of $4 per square foot (half of which can be reinvested in the property).

The owner also must have the appetite to establish long-term, collaborative relationships with their design and construction partners. Everyone on the team will have a different contractual role in achieving the EUI target, potentially up to five years after the initial permitting by the time construction is complete and the measurement and verification process can commence.

Lastly, the owner must be willing to commit to operational boundaries for tenants (e.g. schedules, setpoints and lease agreements) as well as the additional cost of metering infrastructure and performance assurance labor.

The upside with TPP is that the energy target is likely easier to achieve than it would be under TBP, leading to potential first-cost construction savings.

To recap: As each code cycle drives down Seattle’s portfolio-wide energy use, building owners and designers must be prepared to adapt. Future code changes may even target the existing building stock.

As part of a project team, it’s the responsibility of all owners, architects and designers to understand the new code — and to come together to collaboratively rise to the challenges that each unique project presents.