By JOHN MARASCO, JOE FERZLI and MARK SIMPSON
Special to the Journal 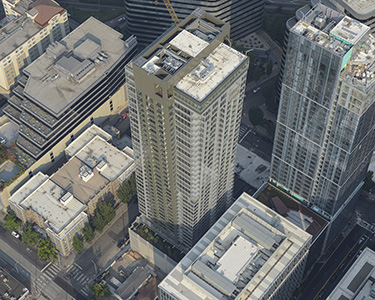 Photo by Sky-Pix Aerial Photography [enlarge]
Kinects Tower has larger floorplates at the top, like an inverted wedding cake.

Named for the connection it provides to downtown, Capitol Hill and South Lake Union, Kinects Tower now stands complete. An iconic design with three flared sides, the 41-story residential tower in the Denny Triangle has 357 units with a rooftop swimming pool and lounge, 4,800 square feet of ground-floor retail space and 315 underground parking stalls.

Back in 2006, when Security Properties and Bumgardner initiated entitlement planning for its 1823 Minor Ave. property, most other projects were focused on Belltown and South Lake Union. Denny Triangle’s sea of surface parking lots and low-rise buildings was still a less than desirable development opportunity.

But this was not intended to be the average development. The vision was to create something with a truly unique design that would draw people to it like a magnet: A building with an engaging roof form that would be visible at eye height from Capitol Hill, while putting the largest floor plates at the top and the smallest at the podium.

Just how did this unlikely, improbable idea survive?

On the block bordered by Stewart, Howell, Boren and Minor was an opportunity to completely re-imagine Denny Triangle’s skyline. A 440-foot-tall residential tower would offer residents unobscured views of Puget Sound, Lake Union, Mount Rainier, and the Olympic and Cascade mountains, while providing a pedestrian-friendly connection to neighboring areas.

The project, first announced in 2008 with the groundbreaking to occur in 2009, was delayed with the onset of the Great Recession. Our project team could see the downturn coming.

Project plans were buttoned up in a way that would be easily retrievable when the economy bounced back and the project could resume. Permitting was kept alive during the downturn, including the permits acquired under the city’s 2006 energy code. This would later prove imperative as the building’s design incorporated vast amounts of glass to ensure light penetration and impeccable views.

In 2013, the project was dusted off and planning resumed with the team intact. Committed to this improbable and modern design, the design team, including Cary Kopczynski & Co., worked to bring the dramatic tower to life. 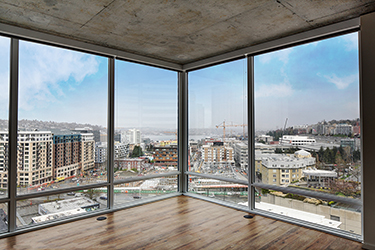 The tower design itself was inspired by the structure of a watch tower — a box on top of sloping legs with stunning views. Achieving this look, however, would take some serious design commitment and structural engineering prowess.

Traditionally, high-rise buildings are built as boxes with equally sized floorplates across all levels. Other high-rises have been designed with larger floorplates on the bottom floors and decrease in size as the building height increases, resembling a classic “wedding cake” design.

For Kinects, the wedding cake was flipped upside down with smaller floorplates on the bottom floors and larger floorplates as the building height increased.

Achieving the design with three sloped sides — without intrusive structural beams on every floor — was a challenge readily handled by the team. Floors eight through 40 increased by roughly 3 inches in size at each level. Shared areas in each apartment, including kitchens and bathrooms remained approximately the same size at each level while living areas and bedroom sizes increased.

Structural columns were placed sparingly and used as focal points in the interior design rather than something to be hidden or built around. Similarly, the concrete of the columns was treated as a finished material to create a modern, semi-industrial feeling space; and lighting was used to highlight the unique features of the concrete rather than obscure it.

Additionally, soffits such as archways and overhanging eaves were incorporated into the design to frame the space and make it feel as though each space had a natural entryway or opening.

The team avoided unnecessary structural beams and columns by using performance-based analysis to meet and exceed building codes. In doing so, they ensured the greatest amount of natural light from the windows through the entire living space. And the windows were important too.

When the building was permitted in 2006, it was designed under the city’s 2006 energy code that allowed Kinects to achieve more than 60 percent vision glass. Today’s energy building code restricts vision glass to about 40 percent, meaning Kinects is one of the newer projects in Seattle with as much glass as projects built a decade ago. Despite the enormous amount of vision glass, Kinects is on track to be certified LEED silver. 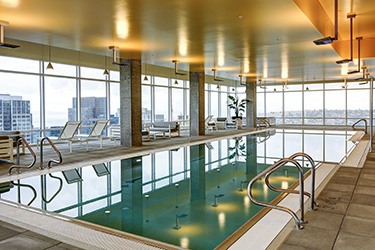 Photo from Bumgardner [enlarge]
Putting in a rooftop pool required a large transfer beam and secondary containment system in case of pool leakage.

An additional structural challenge was building Seattle’s highest above-grade pool on the rooftop. With a lack of transfer beams on floors eight through 40, a large transfer beam and secondary system in case of pool leakage had to be installed on top of the structure, making it “top heavy.”

The addition of a nearly 20-foot hemlock tree on the roof earlier this year took some structural engineering gymnastics, but resulted in a beautiful rooftop space surrounded by an invisible “ah-ha” wall, creating the code-required vertical barrier while preserving uninterrupted views of Seattle, as if from a mountain top. In fact, there are two USGS brass survey markers embedded in rock at points identifying Mount Rainier and Mount Baker.

While the design of the tower is dramatic, the transformation of Denny Triangle and respect for the residential feel and pedestrian experience is also something special.

Until recently, Denny Triangle was known for its surface parking lots, bars and low-rise buildings. A relatively blank canvas, it presented a wonderful opportunity to further connect Capitol Hill to the burgeoning South Lake Union neighborhood by way of pedestrian and bike-friendly thoroughfares.

To avoid the look of traditional high-rises and respect the residential character of the street, the team worked to create a smaller-scale podium on the bottom of the building.

Instead of having the glazing come all the way down to street-level, the podium was designed with terracotta and bay windows to feel more residential and reflect Capitol Hill’s classic red brick apartments. Wide transparent canopies, protective pedestrian landscaping, and careful lighting allow for a pleasant stroll down the street rather than increased hustle and bustle.

Overall, the Kinects team persevered through the recession to deliver a developer’s dream of a high-rise without unnecessary structural beams. The building design respects and enhances the neighborhood feel while proving that innovative design does not need to be boring to be cost-effective.

Kinects is accelerating the rebirth of one of downtown Seattle’s central neighborhoods, with new office towers, restaurants, retail, hotels and residences turning Denny Triangle into a vibrant urban community.

John Marasco is the chief development officer of Security Properties; Joe Ferzli is a senior principal at Cary Kopczynski & Co.; and Mark Simpson is a principal at Bumgardner.