There’s an e-mail image circulating around town. It shows a section of a certain elevated highway set along the banks of the Seine. As the viewer’s recognition of the city of Paris begins to sink in, so does the humor — and the horror.

The joke is on us.

Question: What kind of city would seriously consider building something like this right on an urban waterfront? Answer: Seattle. 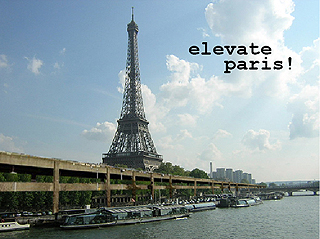 Image courtesy LMN Architects
This image is circulating via email. It is one of several, including an “elevate Venice” image.

Seattle built it the first time, in the late 1950’s because according to the value system of that time, speedy auto transportation trumped a livable, walkable waterfront. And that became a self-fulfilling philosophy. Now, due to pressure from the state, we are actually considering building it for a second time.

To be fair, many other cities also built aerial freeways in the 1950s and 1960s. In the post-war rush to the suburbs, traffic engineers’ idea of progress was driving through the city’s heart without ever stepping on the brakes. What happened to the city as a consequence of their aerial highways was not their concern. The City Beautiful planners from the turn of the century were dead and gone, streetcars were being dismantled.

The consequence for Seattle is that the sun has not shone on a certain long swath of Seattle’s urban waterfront for decades. While other cities dismantle their aerial highways, the stewards of Seattle’s future have been biding their time. 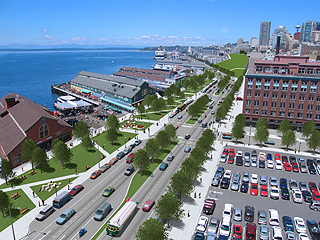 This image shows a viaduct-less waterfront, with open space and a surface boulevard. Hundreds of people have participated in waterfront charrettes in recent years in anticipation of the viaduct’s removal. Images courtesy LMN Architect

Now that voters are being asked to weigh in, those stewards — along with sympathetic activists and experts, have been stepping out again to oppose rebuilding the viaduct. AIA Seattle and the Downtown Seattle Association have joined forces to send a “no viaduct” message, leaving voters to decide whether to check yes or no on the second option before them, a tunnel.

As they have shown in new simulated views created from the Washington State Department of Transportation’s specifications, modern safety standards mean the Alaskan Way Viaduct II would block much more sunshine than the first one. And it wouldn’t be entirely ready to replace car capacity until as late as 2020. Like the rebuild option, a tunnel would completely disrupt the waterfront for years.

But as Mayor Greg Nickels and some city council members threw their support behind the tunnel option, Gov. Christine Gregoire and state transportation officials rigidly maintained that it is too expensive. In that political gridlock, the surface option — now called surface plus transit — slid off the table.

Now, King County Executive Ron Sims wants to bring it back into the debate.

“We are the traffic system,” said Sims, noting that the county operates Metro buses and has contractual responsibility for Sounder commuter rail and for Sound Transit’s light rail system.

“(State transportation experts) have given us a through-put model for automobiles,” said Sims. But he wants to look at something very different, with many more variables — something that more closely resembles the way that real cities work. In addition to the entire downtown traffic grid, that model includes past, present and future forms of alternate transportation like streetcars, bicycles and rail.

“We look at how systems perform,” said Sims. “This isn’t the first time. We’ve done this with the health care,” he said. The real question, according to Sims, is: “What would a system that moves people (instead of cars) look like in this debate?”

You may say that drivers are wedded to their routes, the rest ride transit and the two will never meet. But county transportation staff people have seen a switch-over in their own data. Every time gas prices go up, bus ridership increases, said Sims. And as ridership increases, he said, so does the frequency and the reliability of the whole system.

Sims said he has made an effort to insulate his staff from his own biases as they study the surface plus transit option, and said they will share all their data with the city and state. “Our people are both excited and frightened,” he said.

After Seattle continues to urbanize for 20 years, no one will be discussing this purely as a question of auto capacity, he added. But it might be too late for the waterfront. “Rather than wait,” said Sims, “we are going to have that discussion now.”

Carrie Moon, co-founder of the People’s Waterfront Coalition, has been advocating for the surface street alternative for years. She noted that although the tunnel and the rebuild option each have powerful supporters, “Everybody’s got the same plan ‘B’ (surface and transit).” And that, she said, makes the surface option viable once again. 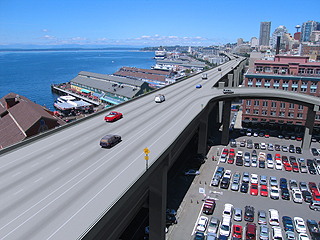 Created according to WSDOT’s specifications, this image shows the proposed viaduct replacement as more than 120 feet wide and almost three times as large overall as the current aerial highway. It would increase the amount of waterfront area that is in shadow

John Norquist, president of the Congress for the New Urbanism, has been promoting the removal of aerial urban highways since he was mayor of Milwaukee, Wis., through the 1990s. Traffic should enter and exit the city in many different ways, he said. And when it comes to going through the city, an arterial tied in with the street grid is inherently more efficient than a highway in the urban core.

This principal is outlined in a presentation given by Scott Bernstein, president of the Center for Neighborhood Technology in Chicago, last fall at the Livable Communities Conference of the AIA. Bernstein has taken a special interest in Seattle’s viaduct, and has found records indicating the original builders of state Route 99 never intended for the highway to go through the city.

He showed there is a direct connection between the construction of urban highways, lower property values and falling population in the city. Not coincidentally, these changes correlate with an increase in the number of cars per household and in the money households spend on transportation.

The reverse corollary to this well-documented chain of events is this: When the highway or overpass comes down, people return to the city and value returns to the land under and around the corridor, and to the blocks on either side.

Populists are bound to smell a windfall here and find solidarity with the tiny percentage of truckers that use the viaduct, and with the motorists that now enjoy the view while speeding along the existing roadbed. And it’s true, according to Bernstein, that property values will double in some cases once the viaduct comes down.

But in a way, it’s only the return of value that was sacrificed for the highway 50 years ago. And unlike many economic windfalls — the return of sunshine, cleaner air and views will have a clear trickle-down effect.

Removing the viaduct’s wall of concrete will also have a mixing effect. On the bay side of the Alaskan Way viaduct, tourists flow up and down the sidewalk and ply the waters around the finger piers. At a safe distance on the upland side, people come and go from offices, and rarely do the two groups meet.

Some urban development, like Harbor Steps, has pushed down toward the waterfront despite the wall of concrete and the rush of overhead traffic. Very slowly, the landmarks of Pioneer square are being saved. But what life a little more sunlight and less noise could bring. And the volunteer work of countless activists, design professionals and students who have reveled in visions waterfront’s future can finally be put to use.

Experts on highway capacity say we must rebuild the highway as soon as possible, in the cheapest way possible. Experts on urban design and sustainability say this is the time for Seattle to make the leap from the 1950s to the 21st Century, from bridging outlier bedroom communities to being a real urban neighborhood as well as a large, multi-modal thoroughfare.

It’s the question of our time, and our timing.

As long as the viaduct stands, the threat of seismic failure is ever present. But the future, according to every regional plan and forecast that has emerged in the last two decades, is ever-increasing density in and around downtown Seattle. The rapid transit that best serves this urban future has been very slow in coming, but it is due to arrive in 2009 — just two more years — right in time to accept some of the trips that will be displaced even if the viaduct were to be re-built.

The tunnel option, light or double-decked, invites way too many variables — from slumping soil to disturbance of Native American remains to earthquake-related tsunamis — to make the already high cost estimates reliable.

Now is the time to accept the necessity and the reality, based on well documented experiences around the nation, of change. That change is away from high capacity highways through the city to high-capacity transit and other modes of people-moving.

So have a laugh at the visual jokes about the viaduct. Then vote “no” on both the rebuild and tunnel options.

That would be in the best populist tradition. Just think of waterfront revivalist and Seattle icon Ivar Haglund. According to historian Paul Dorpat, Haglund said before his death in 1985: “When (the viaduct) comes down, the waterfront will awaken like Sleeping Beauty to the kiss of its prince, the city.”

Seattle is not Paris. But as long as an aerial highway blights its precious waterfront, it will not be free to achieve its true identity as a stunning, water-laced city and a leader in sustainable development.