Design Perspectives: Could SLU become a victim of its own success?

Booming South Lake Union has become a testing ground for policy in fast-growing urban neighborhoods. The Seattle City Council is contemplating an incentive zoning program proposed by Mayor Mike McGinn that would more than double height limits and allow 240-foot towers to rise near the shore of Lake Union.

Could the neighborhood become a victim of its own success?

Green or not, it threatens to be a vast stretch of sameness and mediocrity as a wave of new development sweeps away reminders of the past — along with everyone who is not part of the boom economy.

The new SLU has parents that a lot of U.S. cities might envy: a large, long-term landowner in Paul Allen's Vulcan Inc. and an enlightened planning staff at City Hall. Even neighborhood activists, once simply embattled, are picking their issues carefully and racking up small wins for preservation and affordable housing. But the odds are stacked against them. 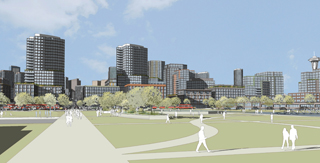 Courtesy of the city of Seattle [enlarge]
This view from Lake Union Park helps to visualize buildout under proposed zoning changes. Several 240-foot towers could be built on the lakefront blocks between Mercer and Valley streets.

The city has stayed just far enough ahead of the boom to make a big difference.

The mayor and the Seattle Department of Planning and Development started early with a smart and ambitious Urban Design Framework that sets up guidelines and goals for a complete, green, walkable neighborhood, with pilot projects in place (See Design Perspectives, “South Lake Union is Stepping Up,” March 23, 2011).

The proposed changes grow out of that effort — which was endorsed by community groups — according to City Planning Director Marshall Foster.

But the framework process deliberately put off decisions about the profiles of new buildings: height limits, setback requirements and floor area ratios that make development profitable, raise tax revenues and block some views.

In the meantime, the economic and political pressure for growth in South Lake Union just keeps building. Corporate giant Amazon is headquartered there and is growing rapidly.

The mayor and officials at DPD have said the proposed changes are needed to accommodate 12,000 residents and 22,000 new jobs in South Lake Union by 2031.

But the jobs numbers are projections for the city as a whole, and they have not been confirmed by the city's comprehensive planning process. John Pehrson, a neighborhood resident and activist, thinks there are other fast growing areas that might take more jobs and housing. “This is growth on steroids,” he said.

Now the City Council faces zoning changes that will open a floodgate of development in South Lake Union. Under a system of incentives that would provide pedestrian amenities as well as funding for affordable housing, some new towers in the neighborhood could rise to 400 feet — about 40 stories. The tallest allowable now is 160 feet. 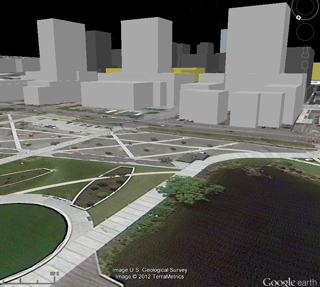 Courtesy of Lake Union Opportunity Alliance
Opponents of the proposed zoning changes produced this view of towers south of Lake Union Park, showing their interpretation of the shape and scale of the allowable buildout.

In the forefront — literally — is a three-block area between Mercer and Valley streets that overlooks Lake Union Park. With newly defined height limits and setbacks in place, each of the three blocks — predominantly owned by Vulcan — could include one 240-foot tower.

With 10,500-square-foot floor plates in the top floors, these are not the skinny towers found in Vancouver, B.C. Critics say that along with their 85-foot bases they would present a formidable barrier between the city and the lake.

At the same time that the proposed zoning changes were developed, city officials worked with Vulcan to find ways to use incentives to get affordable housing and other benefits. The Seattle City Council is now considering an exchange in which Vulcan would convey to the city 37,600 square feet of undeveloped land it owns on a block bounded by Broad and Republican streets and Dexter and Aurora avenues.

This would leave the city in control of a block where it could seek a development partner to build affordable housing and facilities for job training. In return, Vulcan would receive a number of credits based on a market valuation of the land and pre-determined, per-square-foot rates for the right to exceed the base zoning on the lakefront blocks and elsewhere in South Lake Union.

This kind of deal is tough enough to vet, but Seattle City Council members should be paying equal attention to another aspect of the McGinn package: the provision for transfer of development rights. TDRs, purchased by developers in return for the right to build extra square footage, are banked and used by a jurisdiction to take certain resources — like historic buildings — off the market.

In the proposal now on the table, TDRs purchased in South Lake Union would, for the most part, preserve forest land outside Seattle. The deal, brokered through nonprofit Forterra (formerly Cascade Land Conservancy) and King County, and resulting in a stream of tax revenue from county to city, would be a benefit to the region — but do little to preserve pieces of the industrial past and history of South Lake Union.

Pehrson, who's view of the lake is on the line, has joined with others in a consortium of three South Lake Union community groups to engage architect and former Seattle City Council member Peter Steinbrueck in their cause, on a partially pro bono basis.

Steinbrueck said he considers the McGinn incentive zoning package “a piece of work not ready for launch.” He wants to see the city's longstanding consensus about stepping heights down to the water's edge respected, and he wants better protections in place for what remains of the historic fabric of South Lake Union.

Steinbrueck and his clients are right to try to put the breaks on and at least moderate the incentivized height limits. Lake Union Park is a great investment in the future of the neighborhood, and lots of people should be able to see it from their windows — and not just from the edges. That's how “step down” is supposed to work.

Blocks built out and up at the same time threaten to make the neighborhood into a cookie-cutter product instead of a rich urban ecosystem. And that would be a net loss for the city, for longtime neighborhood residents and for long-term owners like Vulcan, too.

Activists can take pride in fighting for the inclusion of the renovated old laundry building in the award-winning Alley 24 block, and advocating for the red brick shell that now houses Tom Douglas restaurants on the Amazon campus. And Vulcan can take credit for including these in block redesigns.

But there is a lot more red brick at stake, aside from historic laundry blocks and the Seattle Times buildings. Much more of it should be saved — along with some of what it stands for.

It's not just about housing, bars and restaurants. Other gathering places make the community, according to local activist and caterer Christine Lea. “That narrative needs to be told, and needs to be present,” she said.