Design Perspectives: A path of great resistance in Steinbrueck Park

Sometimes the best design choice is the most obvious — and the hardest to make.

Victor Steinbrueck Park is a case in point.

MarketFront, a huge piece of public infrastructure now under construction, is coming right up to meet the view-rich park. It's obvious that MarketFront should be welcomed in a big way, by opening up the 1980s park plan and joining the two with better circulation.

Instead, the big changes in the pedestrian environment are being treated as a threat, and the park may be virtually walled off in the name of historic integrity. An important design opportunity is getting lost in the fog of a politically toxic Seattle process. 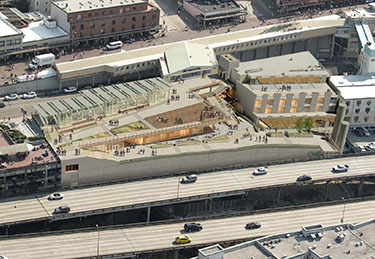 Image by The Miller Hull Partnership [enlarge]
This aerial view of MarketFront, under construction in the center, shows the potential connection with Victor Steinbrueck Park on the left.

The design consultant for the park's renovation is Walker Macy.

One voice has been heard, loud and clear. Richard Haag is Seattle's most distinguished landscape architect and co-designer of Steinbrueck Park (along with Victor Steinbrueck himself). Haag has called the park a last reservation for urban Native Americans, and also defended it in abstract design terms as “a place to go to — not through” in a July 30, 2015 story in the DJC. You can read it at https://www.djc.com/news/co/12080151.html/.

True enough, as far as that goes. But we've come a long way.

Completed in 1982, the park perches on the edge of a cliff over a parking structure built into the hillside overlooking Elliott Bay. The views are irresistible.

Visitors enter from Western Avenue, and approach the edge of the cliff. Then, walking north or south, they must choose whether to enter one of two “rooms” marked by low walls on either corner of the park. Most occasional or one-time visitors do not go into either space, because those walls seem to mark a preserve for park habitues and the homeless.

It is one thing to respect the homeless and share parks with them. It is another thing to design major pedestrian infrastructure around them. That is what is happening at the southwest corner of Victor Steinbrueck Park. It's being done in anticipation of a vetting and permitting process that involves the Pike Place Market Historical Commission, charged with making sure the park doesn't get a wholesale redesign.

Original design features include grassy berms surrounded by low walls, a large tree, a pergola-shelter, and the low walls at the southwest corner. When Haag and Steinbrueck designed this park, there was literally nothing to get to beyond that corner.

Soon, there will be a lot.

So near, yet so far

The other side of that low wall is now a huge construction site for MarketFront, which reaches out from the traditional Pike Place Market structures toward Elliott Bay and includes open space, housing and commercial areas. It's all going to be built around a grand promenade and public pathway that comes right up to meet the edge of Steinbrueck Park and the outdoor room that was designed into the park. The low wall there is a feature of the original 1982 park design, which came under an umbrella of historic protection just a few years ago after a number of revisions to the park had already been made.

The noisy elevated freeway that has always faced the park from the west is scheduled to come down in 2019. Renovation of Victor Steinbrueck Park, funded by the 2008 Parks and Green Space Levy, was put off in order to better sync with post-viaduct plans. Those plans include not only the MarketFront extension to the market, but the park-like bridging structure called Overlook Walk that will continue down to the urban shore.

People standing at the southwest corner of Steinbrueck Park will be able to see a way to the water, but they may have to hop the wall or backtrack to get there.

So far, the park renovation has been funded by $1.6 million of levy money. Construction is scheduled to begin in the fall of 2018 for completion in 2019, the year the viaduct is now supposed to come down.

But as it turns out, that funding will not be nearly enough, and hardly anything in the park can stay exactly where it is. That's because the west half of the park is a lid sitting over the private structured parking that is built into the cliff. The waterproofing membrane between the park and the parking has failed. It needs to be replaced with a more sustainable system, one that includes drainage.

The graceful rolling berms and the historically inspired pergola can remain, but accommodating the new drainage system involves lifting part of the west half of the park and putting it back down, and redesigning all of it to resolve the changing ground level between east and west. There is another $5 million in the mayor's proposed budget for 2017 earmarked to cover that. 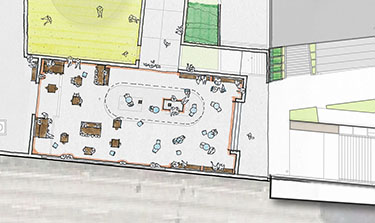 Images by Walker Macy [enlarge]
Here are two plan-view alternatives for revisions to Victor Steinbrueck Park that are intended to break up the blocked-off area in the southwest corner, with sharply angled pathways to MarketFront. A more direct and intuitive way through should be offered.

Reviewing the design is the responsibility of the Pike Place Market Historical Commission. Guidelines on Steinbrueck Park call for preserving “character-defining” features. But at least one of those has already been changed. A play area that was impossible to maintain was eliminated and later replaced by an artful homeless memorial. And history marches on. We're now designing with the Americans with Disabilities Act and evolving best practices for urban parks, which includes things like movable furniture.

“It's not a mausoleum,” said Peter Steinbrueck about the park. He is Victor Steinbrueck's son, an architect, former Seattle councilmember and adviser to the design team.

Walker Macy is showing two alternative revisions to the original park design, so far. Each begins to break up the blocked-off area now in the corner next to MarketFront, with smallish passages around it. But each retains the low wall that would cut off circulation through the park and along the cliff edge to MarketFront.

As a result, visitors will need to turn at least two sharp angles to get to the adjoining MarketFront walkway and the post-viaduct waterfront. Or they can just jump the walls — if they are able.

Neither represents a final design, according to lead designer Lara Rose. That's good. The public should be shown a third alternative, one with an accessible pathway along the cliff edge into the new waterfront infrastructure.

You can provide input through Oct. 17 on the park design at an online open house. Go to http://tiny.cc/7faufy.

At a recent city-sponsored meeting to gather neighborhood input, the two options were on display for the southwest corner of the park, but physical design features got lost in the political fog.

Instead, the design team got an earful about long-term camping, drug dealing, low walls used as urinals, lack of public toilets, and lack of city responses to these issues. Historic details — good or not-so-good — got no respect, and attendees were quiet about plans for new lighting and the need to edit some of the most stumble-prone built-in seats.

Formal feedback gathered in meetings and online has yielded overwhelming support for “a direct connection to MarketFront” above all, but there was little talk at the meeting about what that might mean.

Here's what it means: Remove the barrier that stops the flow of visitors and park habitues, including people in wheelchairs, along the cliff edge — an edge that will become virtually contiguous with the edge of the walkway in MarketFront.

There are many ways to do this while maintaining important historic features like the berms, the pathways and the pergola. A low wall there makes no sense — except as someone's last stand. Whose?

Landscape architect Peggy Gaynor worked with Steinbrueck and Haag on creating the working drawings for the park and overseeing construction. She is proud of the way Victor Steinbrueck fought to preserve the open space there (originally called Market Park) when apartment towers for the rich were beginning to rise all around, and people who had been living downtown all along were getting priced out. The park would be welcoming to everyone, including the “little guy” with a picnic lunch.

But it has. Over the years, it has become an informal gathering spot for urban Native Americans. There is a local culture of woodcarving said to be alive there. Original artwork — including totem poles that are not authentic to local tribes — is intended to celebrate Northwest Native American heritage. This year's design efforts have been especially focused on incorporating art and design features that celebrate their traditions.

The Chief Seattle Club, located in a Pioneer Square storefront, is a special resource for urban Native Americans. Director Colleen Echohawk has been advising the designers on Victor Steinbrueck Park, and she is well aware that it is a gathering place for Native Americans. “I would know most of them when I go down there,” said Echohawk.

There were no Native American voices at the last city-sponsored neighborhood meeting, but there has been a concerted effort to get them into the design process and to honor their heritage through art. It turns out the 1980s-era totem poles now in place are probably not the best way. The Norwegian farmer that tops one of them may be fun, but to local Native Americans totem poles are trophies of wars against tribes far to the north. Totem poles were never part of the rich local tradition, which we now know more about. Echohawk suggests that a Welcome Pole, a local tradition, would be more on the mark.

Some urban Native Americans have concerns about isolation, she said, and fears of violence, of being trapped. At the same time, they have a sense of connection to the bay.

“There is excitement about being able to get down to the water. It would be so great to not have to go around a wall to get there,” she said.