Project of the Month: Fire Station 30: a sentinel with an open heart 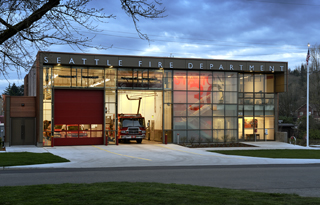 Firefighters are there to stand up and take on the worst. But the fire stations where they wait for the call tend to lie low — blending with the scale and look of the single-family neighborhoods they serve.

Last-century zoning, which tended to set residential neighborhoods apart from all things commercial or civic, promoted the status quo.

Fire Station 30 is different. With its tight, boxy shape, elegant copper skin and beacon-like glass front, it's a civic presence, a sentinel that's meant to be seen as well as trusted.

It stands up for the future in the Mount Baker neighborhood, where the Olmsteds' 19th century grace meets 21st century transit.

Just above the fire station and crowning Mount Baker Boulevard is massive, historic Franklin High School. Opposite and on the far side of busy Rainier Avenue, Link light rail's Mount Baker Station rises high to meet the guideway coming out of Beacon Hill tunnel.

A single-family neighborhood spreads up the hill on the Franklin side, and the city is considering raising the height limit on the other side of the fire station to allow more dense development around the light rail station.

All that drove the decision to give the smallish building a strong profile as well as an open look, according to architect Walter Schacht of Schacht Aslani Architects. He thinks it's time to put a little more civic back into the single-family mix, returning to historic paradigms from Mount Baker to Capitol Hill.

Without a shred of nostalgia, Fire Station 30 takes back a little of the civic pride and stature older stations claimed.

And like a well-designed house, it lives well on the inside, too. The light and views are great, according to the personnel who watch and wait there, shift by shift.

“What they loved was meeting the new program,” said David Jackson, project manager for the city of Seattle. But the big curtain wall and view — that put them over the top.

“They were really psyched about it,” he said.

The city is dealing with a crop of aging stations, coupled with an expanding role for these facilities in all kinds of emergencies.

Fire Station 30 replaces a low-lying, nondescript station built in 1949. It is one of 32 neighborhood fire station projects funded by a levy Seattle voters passed in 2003, according to David Kunselman, the city's fire levy program manager. Most are renovations of existing buildings. Trucks are larger, and stations need to deal with new contingencies like biohazards and decontamination.

Projects typically include seismic upgrades and post-9/11 security features. But they also serve the ones who serve — with better bunks and fitness facilities.

Fire Station 30 reverses some basic assumptions in architecture as well as urban design.

The program for fire stations tends to divide the plan in two. There's the “house” side, where personnel spend their time at desks, at meals, at rest or — increasingly — working out. Then there is the “apparatus” side, where the trucks and all the trappings of fire fighting are stored and prepared for deployment through the large garage doors.

Station designers tend to place these side-by-side, thereby breaking down the height of the bulk of the building and typically making the “house” side similar in massing and even style to a single-family home. 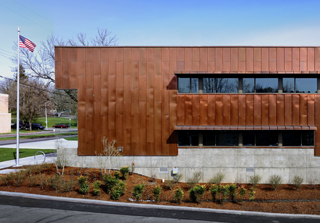 [enlarge]
On the west side, Fire Station 30 wears rich copper siding. The traditional material is revered for its durability and changing color. A dip in prices when the project was bid made it a less costly alternative to steel. 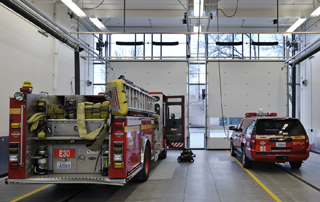 [enlarge]
The apparatus side of Fire Station 30 accommodates trucks.

But as the programmatic needs of the new fire station were refined, it became clear that the program for Fire Station 30 would fit into one neat, rectilinear package, with two levels on the house side sharing a common wall with the tall apparatus side.

It goes against the existing biases for stations to blend in rather than stand out. But the designers never looked back.

“We were working as hard as we could to make a simple box out of it,” said Eric Aman of Schacht Aslani Architects. Ultimately, the Seattle Design Commission agreed.

It wasn't easy to pack it all in without prominent “saddlebags” to take the odd square footage. “This really is a tiny building,” said Schacht. The key to making it functional is the circulation plan, which links everything front to back with a corridor on each floor and a stairway at each end.

“Circulation should be very simple,” said Aman. Placing the fitness facility right up above the entry — behind fritted glass that spells out the name of the building — gives personnel visibility — and a view of the nearby high school athletic field while they work out.

That box might have been built of masonry just like most fire stations around the country, but test drilling showed the site is on the slope of a liquefaction zone, and a light shell was called for. It stands on an elevated structural slab, supported by 48 auger-cast piles ranging from 10 to 40 feet in depth.

Like many of the other levy projects, this fire station reflects new standards for livability and sustainability.

Fire Station 30 won LEED gold status, helped by the geothermal heating and cooling system that will pay for itself in a decade and continue paying back over the long building life. Eight wells, each of about 300 feet in depth, serve the living quarters via a heat-pump system.

The apparatus bay is heated with high efficiency gas unit heaters that can rapidly accommodate major changes in temperature when the large doors are opened in the winter. There's fresh air throughout. 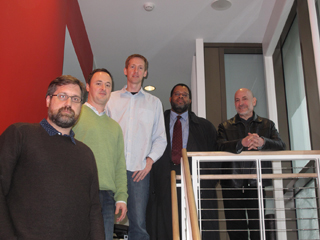 Personal bunkrooms have operable windows, and the shared day room and physical training room are naturally ventilated, with individual control. Stormwater from the roof and parking areas is diverted to a landscaped bioswale along the west side of the building.

Schacht Aslani Architects had already made copper cladding a part of their repertoire with the addition to the Central Area's Douglas Truth Library.

The foundation constraints for Fire Station 30 called for a lightweight wood frame structure. The project was bid with a basic design of steel cladding, but richer copper was an alternative. As it turned out, the cost of the metal was at a historic low about the time the project was bid. The price — combined with practical advantages like light weight and long, long life — won the day.

Then there's the beauty. Copper's blue-green patina has come to be associated with historic roofing, cupolas, and the like. The metal doesn't usually appear in smooth or corrugated modern walls, like those of Fire Station 30.

Some lovely shades of mocha are already appearing. But don't hold your breath for the fabled blue-green, like you see in Boston or New York. It'll take literally a lifetime here in the Northwest — and that's not really a bad thing.

“We just don't have the acid rain,” said Schacht.

“A classic statement in modernist aesthetics, forms and proportions, relevant to its purpose.

“This is a beautiful example of a rigorously developed, restrained and generous building. What a remarkable calm addition to the community.”

The Project of the Month is sponsored by the Daily Journal of Commerce and the Seattle chapter of the American Institute of Architects. The Project of the Month for January was selected with the assistance of University of Washington professor Vikramaditya Prakash, landscape architect Barbara Swift, architect Scot Carr and architect Jim Graham. For information about submitting projects, contact Isla McKetta at AIA Seattle at (206) 448-4938, or imcketta@aiaseattle.org.