To maintain aging bridges with limited funding, WSDOT goes for biggest bang for the buck 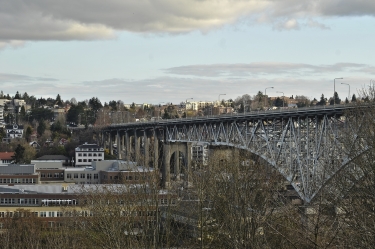 Photos courtesy of WSDOT [enlarge]
The 84-year-old Aurora Bridge is getting a $18.7 million paint job to help slow its aging process. Work is scheduled to finish by summer of 2017.

The Washington State Department of Transportation wants you to know the state is making progress improving the performance of its bridges. At least for now — insufficient funding could hamper its efforts.

The agency released an annual report earlier this year showing its bridge inventory is in slightly better shape than it was five years ago.

The intervening years haven't been kind.

The American Society of Civil Engineers gave the state a C- for its bridges in 2013 in the group's quadrennial report card for the nation's infrastructure. ASCE evaluated criteria such as capacity, condition, funding, future need, resilience, innovation, and operation and maintenance. The report said that bridge infrastructure must become a priority in Washington in order to meet current traffic demands and provide the foundation for economic success.

ASCE estimated that by 2020 the U.S. would need to spend another $3.6 trillion for essentials like dams, road maintenance and hazardous waste disposal.

Soon after ASCE issued its report card, the Interstate 5 Skagit River Bridge collapsed after it was struck by an oversized truck, requiring a replacement span.

So WSDOT's bit of good news is a step in the right direction. The agency released its annual report on its bridge inventory in the June 30 edition of the Gray Notebook, a transportation system performance report.

The report found that 92.1 percent of state-owned bridges (measured by deck area) are in fair or better condition. That's an improvement from 91.4 percent in 2010 — a difference of 700,000 square feet in deck area.

“This is good news because it shows our use of best management practices and innovative strategies are working,” said Tom Baker of the WSDOT Bridge and Structures office, in a statement. 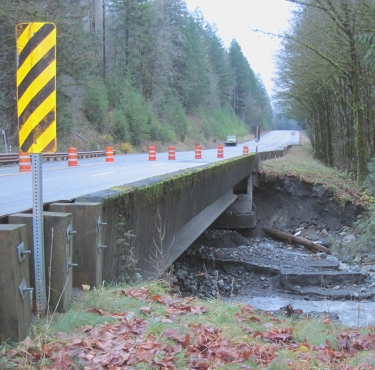 [enlarge]
Foundation scouring is the top contributor to bridge collapse. WSDOT last month closed part of US 2 after a surging creek eroded this bridge’s underpinnings.

WSDOT is scheduled to begin construction on 44 bridge preservation projects during the 2015-17 biennium. The state Legislature passed a 16-year, $16 billion transportation package over the summer, which will contribute funding for many bridge projects.

Baker, speaking to the DJC, attributed the state's performance improvements to funding and good asset-management principles, but said current funding isn't sufficient for the gains to continue.

WSDOT is turning to money-saving tactics such as limiting repairs to only the worst parts of the bridge deck.

Such spot improvements can extend the life of the deck five to 10 years, Baker said. He used the example of a bridge deck in Spokane that received this type of repair after sustaining damage from studded tires.

WSDOT has been performing these limited maintenance projects for the past year and a half, Baker said.

The state is testing the effectiveness of this preservation method by comparing the performance of treated bridges with that of untreated control bridges.

The WSDOT report said the agency had 46 bridges that were due for more extensive deck repairs, and another 25 that were considered past due because more than 5 percent of their deck area had already been patched or showed signs of deterioration. The estimated cost for the repairs is $70.8 million, with another $71.5 million due for 21 bridges that will need repairs over the coming decade.

Baker said that given limited funds, WSDOT must prioritize its repair projects and consider different strategies to get the biggest bang for the buck. At the top of the agency's list are bridges shared with neighboring states Idaho and Oregon, which split costs with Washington.

“We want to make sure we meet our obligation to our partners,” he said.

After that, scour repairs take highest priority. Water rushing past bridge foundation structures in rivers and tidal zones can put bridges at risk as sediment is washed away, leaving behind holes that compromise the structure.

“Scour failures have been our largest reason for bridge collapses,” Baker said.

Structural repairs, such as replacing steel rivets, come next on the list, followed by paint jobs and concrete bridge deck repairs.

“If you protect the deck at the right time, you may not have to replace it,” Baker said.

Because of timely deck repairs, the state has had to complete only 16-18 whole-deck replacements over the last century, he said.

WSDOT keeps “excellent” data about the condition of its bridges, Baker said, and the agency knows which bridges have deterioration that needs to be addressed.

“But we can't fix everything,” he said, “so we select projects until the funding runs out.”