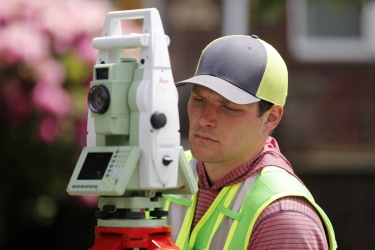 GeoDimensions Land Surveying has rebranded as Terrane and finished a 5-year strategic plan it said will redefine how land surveying services are completed in the Northwest using proprietary technology.

CEO Ken Green said the firm has had significant growth since coming out of the Great Recession.

He declined to provide revenue figures for the privately held company, but said revenue has increased by an average of 37 percent a year over the past five years.

“The reality is it's just been a very methodical building up of the business” and Terrane is now one of the largest land surveying firms in the Northwest, he said.

Things were different in the recession when many land surveying firms were closing down.

During that time Green rethought the business, with the result being the new divisions and platform.

Terrane hired Jun Tay in 2013 to try to adapt its off-the-shelf software to help it with its growth. But the company determined it was the wrong product and no other software fit its needs, Tay said.

So Tay, now director of information systems, created a new platform that organizes proposals, project management, billing and sales so Terrane can take on a large volume of projects at different scales.

The platform organizes project data, such as which phase a job is in, who completed that phase, and what is next to be done. It assigns workload based on project requirements and employee skill set. When someone is hired, their skills are entered into the system, and they can go to work quickly.

“This could be your first day and we could immediately have a job assigned to you,” Tay said.

An interactive map that is part of the platform tracks where workers are in real-time, so projects can be scheduled close together to get more work done, with less travel time. Using the map, it's also easy to escalate a project and get a crew there quicker when a client is in a rush.

Green said without this visual presentation, schedulers would need to scour Excel spreadsheets to determine where each of the firm's seven crews are and where they need to go next, which could take a half-hour versus 20 seconds with the platform.

The firm was founded in 1983 by Green's father, Ed Green, and now has 40 staff. Prior to the Great Recession, it had five employees — then the most in its history.

Ken Green said Terrane only does land surveying, unlike other survey firms that also offer services such as engineering and landscape design. This simplification makes it more efficient, he said, and gets it more jobs from engineers who do not worry Terrane will compete with them on future work.

About half its work is residential, mostly high-end single-family, but some multifamily. The rest is ALTA surveys, land-use surveys and construction staking.

The firm generally works on 100 or so projects simultaneously and is capable of doing thousands of projects throughout the year, he said.

Green said the new divisions help the firm assign people with specific skill-sets where they fit best, including the “superstar people” the firm was able to hire coming out of the downturn.

Green said the Seattle-King County real estate market is maturing, with a lot of people wanting to invest in residential and commercial projects. He said there are significantly more investors coming from out of state and out of country than in the last boom.

“Just across the board there's just a tremendous amount of investment going on,” Green said.