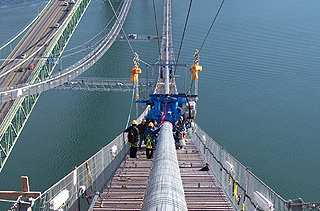 Photo by Dan Crowell [enlarge]
Workers help install one of the two 21-inch-wide cables that support the new Tacoma Narrows Bridge. The cables were assembled from 18,000 miles of steel wire.

The new Tacoma Narrows Bridge, at 5,400 feet, is the longest suspension bridge built in the U.S. in more than 40 years. The span between its two 510-foot-tall towers is 2,800 feet long.

The bridge opened to traffic on July 16. It carries eastbound traffic and connects Gig Harbor to Tacoma, running parallel to the old Narrows bridge.

More than 90,000 vehicles crossed the older bridge each day, exceeding its design by more than 30,000. The construction and renovations will allow the bridges to accommodate an expected increase in motorists. One-way traffic on each bridge will improve safety as well.

Tacoma Narrows Constructors, a joint venture between Kiewit and Bechtel, designed and built the bridge for the Washington State Department of Transportation as a design-build project. The delivery system removed as many as two years from the construction schedule, according to Scott Steingraber, senior project manager for TNC.

“With a design-build project, we get to decide when and how to build elements of the structure, as opposed to getting a complete set of plans that restricts how we build things,” Steingraber said. “That means we could continue designing the bridge while constructing the components that we’ve already finished designing.”

For example, the cutting edges of the caissons, or tower foundations, were fabricated at Todd Shipyard in Seattle, then launched and floated to the Port of Tacoma. There, TNC built up nearly 40 feet of the caissons. Meanwhile, in the Narrows, bracing anchors for the caissons were installed.

“The ability to conduct those operations at the same time was certainly key to expediting the delivery of the project,” Steingraber said.

The new Narrows bridge consists of a 10-foot public walkway, a 10-foot shoulder, a two-foot shoulder, and four 11-foot lanes, one of which is for high-occupancy vehicles. The towers and caissons were built to accommodate a second deck or light rail, giving WSDOT flexibility in the future.

Next, crews built the bridge towers. The towers are concrete instead of steel like the towers on the existing Narrows bridge. To strengthen the concrete and make it less permeable to the sometimes extreme weather conditions of the Narrows, a microsilica fume was used in the concrete mix. Tower construction was finished in 2005.

One of the final steps in constructing the new Narrows bridge was installing the deck sections. Prefabricated in South Korea, the 46 deck sections arrived over six months on three different semi-submersible ships. The deck sections were lifted into place using a barge and gantry cranes.

The project was especially challenged by the weather. Crews encountered 7-knot currents and 15-foot tidal swings, as well as winds, rains and temperature extremes that left their marks in the record books.

“You plan for weather and when it does not happen as planned, you accommodate,” Steingraber said.

“For example, you build in tolerances for wind speeds, or the maximum or minimum weather conditions when people can safely work. The safety of our people is most important, so that factor was what all else was gauged by when facing weather challenges.”

A potential hurdle was finding people with experience building suspension bridges — a task made more difficult because a suspension bridge of this size and scope hadn’t been built in the U.S. for so long.

“While it’s difficult to find a person who has worked on all aspects of a suspension bridge, with companies like Kiewit and Bechtel, we can pull together people who have worked on various aspects of bridges,” Steingraber said.

“For instance, our joint venture includes people who have experience building massive concrete structures that in some ways are similar to the caissons and anchorages. Their expertise is a huge benefit when it comes to building the structure.”

Communication and coordination were also key elements for the project. The technical complexity of the project required extensive coordination among offices worldwide, including Tacoma, London, New York and San Francisco.

“With a project such as this, where very heavy engineering is involved, it’s important to have permanent design engineering coordinated with construction engineering,” Steingraber said.

With less than five years to design and build, the Tacoma Narrows Bridge project is a model of engineering success for suspension bridge building, joint-venture partnerships and design-build contracting.

This article was written by staff from Kiewit Corp. and Tacoma Narrows Constructors.