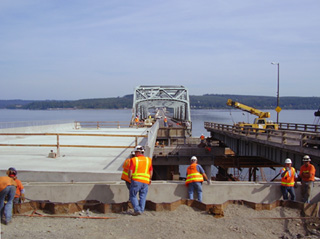 Photo courtesy of Kiewit [enlarge]
New approach spans were rolled into place on the Hood Canal Bridge in August 2005. The east half of the bridge is slated to be replaced in the summer of 2009. A retrofit of the newer west half should be done by the end of 2010.

Constructing the world’s longest floating bridge is a challenge. When that bridge also has a draw span, is located in a tidal basin with fast-moving currents, and is a vital traffic link between greater Puget Sound and the Olympic Peninsula, the difficulties compound.

Despite these challenges, work on the Hood Canal Bridge continues successfully and with minimal impact to traffic.

The original bridge opened in 1961. A 1979 storm sunk the west half of the bridge. The Washington State Department of Transportation replaced the west half in 1980.

One of the first challenges came in August 2003, only 11 days into construction. The original project scope called for the general contractor, Kiewit-General, to build a graving dock site at Ediz Hook in Port Angeles for the construction of pontoons and anchors. Facility construction had just begun when crews found ancient tribal artifacts, halting work at the site.

WSDOT and leaders of the Lower Elwha Klallam Tribe spent most of 2004 attempting to continue site work around the archaeology process. Proving more difficult than anticipated, WSDOT abandoned the site in December 2004.

In spite of the distractions in Port Angeles, work was completed on schedule in the fall of 2005. Work to widen half of the bridge began, as did work on the approaches, and new roadway decks were rolled into place. Still, because of the discoveries in Port Angeles, and the resulting delays and change of venue, a new plan and contract were necessary.

“We needed a new place to build pontoons and anchors, we had to reschedule the job, and we had to do it all under a new contract because everything had changed so dramatically,” he said.

“The state took a proactive approach to working with us. We sat down and resolved the problems collectively and came up with a fair adjustment to the contract, all while maintaining our focus on getting the bridge replaced in the minimal amount of time.”

With the new contract in place, the project could move ahead and Kiewit-General could focus its attention on the complex task of replacing and retrofitting the floating bridge.

“The job has all kinds of engineering challenges just by its nature, independent of the challenge brought about by the archaeological find,” Fisher said. “The latter shouldn’t discount the fact that the work being done at Hood Canal is an engineering feat.”

For it to float safely, it must be a cellular structure made up of multiple tall and thin walls, constructed longitudinally and transversely, to displace enough water to float at the right level. To withstand the loads imposed by the combination of traffic, wind, waves and currents, the structure has to be heavily reinforced and post-tensioned.

This combination makes for complex concrete construction, especially on the Hood Canal project because of the draw span and the machinery needed to operate it.

The marine environment of the canal is also unique to this job. The canal is 300-400 feet deep through the middle, and crews must work around daily tidal swings of 12-14 feet.

Hood Canal is a long, narrow waterway, and significant tidal currents add to the degree of difficulty in all aspects of the construction. In addition, high winds often blow through the corridor, resulting in rough seas and water spray over the top of the bridge.

“Combine all of that — tidal fluctuations, currents, and foul weather — and you’ve got a set of challenges that sometimes make it tough to do anything,” Fisher said.

Traffic flow was also a major concern when planning the project. WSDOT designed the project to have minimal impact on traffic patterns. Although scheduled shutdowns of the bridge cannot be avoided, WSDOT has been successful in accommodating shorter closures. Replacing the approach spans went so well that replacement of each approach required only a two-day closure instead of the planned three days. The approaches were rolled into place in August 2005.

In 2009, the old bridge is scheduled to be removed and replaced with new components over six to eight weeks, all in an effort to minimize impact to the peninsula. Lessons learned during the August 2005 closures will help WSDOT and Kiewit-General prepare for the 2009 closure.

Construction is scheduled for completion in 2010. From the public’s perspective, however, the bridge may appear finished by mid-2009 because the old bridge will be replaced and people will be driving on the new structure. Rehab and cleanup work will continue into 2010.

The article was written by staff at Kiewit Corp.