I-405 upgrades just around the bend

Commuters traveling the Interstate 405 corridor this summer are seeing proof that their transportation investments are hard at work.

The Washington State Department of Transportation has five separate I-405 projects currently under construction and three more are scheduled to start construction in 2009. When you count Sound Transit’s Totem Lake Freeway Station and Canyon Park Freeway Station, it adds up to seven I-405 construction projects this summer alone.

These construction projects are part of a 2002 master plan for the 30-mile I-405 corridor. When carried out, the I-405 master plan improvements are designed to reduce congestion by accommodating as many as 10,000 person trips a day — in cars, buses, carpools and HOV/managed lanes. 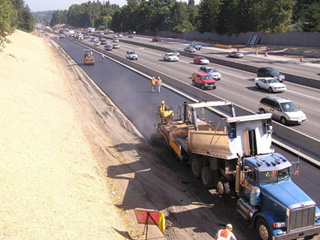 Photo courtesy of WSDOT [enlarge]
Crews from WSDOT and Kiewit are nearing completion on a project to widen I-405 through Kirkland.

The funded construction projects are the first steps to carrying out the larger master plan, not only by adding two new lanes in each direction, but also using the lanes more efficiently.

This fall, drivers will see two new lanes open on I-405 through Kirkland — ahead of the original schedule and under budget. Construction on new lanes through Bellevue, Renton and Tukwila is just beginning.

The state Legislature has committed nearly $1.5 billion for I-405 improvements. This means significant progress toward carrying out specific projects from the master plan that are designed to reduce congestion and improve safety.

The first project, the Kirkland Nickel Stage 1 Widening Project, includes adding one new lane in each direction between Northeast 85th and Northeast 124th streets and improvements to the Northeast 116th Street interchange. The design-build contractor is Kiewit and the project will be complete in late 2007.

Crews from WSDOT and Atkinson Construction working on the I-405 South Bellevue Widening Project have started their first phase of construction work between 112th Avenue Southeast and Interstate 90, adding lanes and widening structures to make way for the ultimate widening of four miles of I-405 from 112th Avenue Southeast to Southeast Eighth Street. This work, which also includes environmental enhancements at the Kelsey Creek wetlands and an innovative, quieter pavement, will be complete in the summer of 2009.

The Bilfinger/Tri-State joint venture contractor team is beginning construction activities on the Interstate 5 to state Route 169 Stage 1 Project, which addresses the congestion between Tukwila and south Renton. When complete in 2010, these improvements will provide:

• Increased speeds between I-5 and state Route 167

— at northbound I-5, where traffic will be able to directly enter northbound I-405, and the existing merge will be replaced by a new freeway lane.

— at the state Route 181/I-405 northbound ramp intersection, where WSDOT is adding a second northbound SR 181-to-northbound I-405 left-turn lane.

— at the northbound off-ramp to SR 167, where traffic destined to northbound and southbound SR 167 will have their own exit lanes.

The next I-405 projects being considered for funding address the congestion in and around the I-405/SR 167 interchange, including a new direct-connector ramp linking HOV lanes on both freeways, and two new lanes in the highly congested section of I-405 between Renton and Bellevue.

WSDOT’s annual congestion report regards the I-405 commute between Tukwila and Bellevue as the most congested in the state. Read more about how WSDOT is addressing congestion around the state online at http://www.wsdot.wa.gov/accountability/default.htm.

Our quality of life and economic prosperity depend on a transportation system that provides choices to the traveling public and keeps our region moving. The I-405 corridor projects represent a new way of thinking about system-wide transportation solutions that focus on moving people and goods to maximize the efficiency of our personal and public financial resources.