The construction business is a little like the bread business.

Bread is made to satisfy the demand of bread consumers, is sold for a market price, is made by specialist bakers and takes ingredients as well as labor and equipment to make. Construction is undertaken to satisfy the demand of a building owner, for a price that the building owner is willing to pay, is done by licensed contractors and takes materials (ingredients), labor and equipment to complete.

Hopefully, the sale price for both bread and building construction is more than the cost of the inputs; but how much more greatly depends on a variety of factors such as general demand, competitiveness in the local market and the uniqueness of the product (in construction this may be a contractor’s specialization in a particular building type).

Like bread, the end price is not only determined by local costs, but also by global factors — a big drought in say Russia or Australia can push up the global price of wheat, affecting us here in the U.S.

Unlike bread, demand for construction tends to be cyclical and so over the short term construction bid prices follow a curve reminiscent of a roller coaster. During boom times they rise steeply and then, when the industry falters, bid prices either flatten or recede. However, over the medium term, bid prices trend along a similar line to the rate of inflation in the general community, which is measured by the Consumer Price Index (CPI). 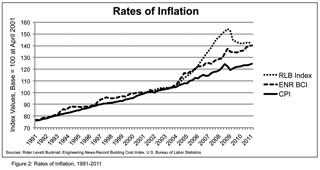 [enlarge]
The gap between bid prices (RLB Index) and construction labor and material prices (BCI) has almost closed. However, the gap between BCI and CPI has not closed due to the six factors discussed in this article.

The ongoing change in bid prices is generally referred to as “escalation,” so this article will use that term from here on.

So, what is happening with bid prices?

As of this month, bid prices continue to be remarkably stable with escalation almost flat — a great time to build. However, this picture of price stability covers a more complex set of factors.

When one compares BCI with CPI one sees that the combined cost of labor and materials are actually rising faster than the general cost of living. Remember, this is during a period when bid prices are almost flat.

There is a disconnect between the change in price for those materials for which housing construction provides the dominant demand, such as lumber and drywall, and those materials which have broader based demand, such as steel. In the current market, any material that relies on the housing market for demand continues to be price suppressed.

There is a disconnect between the change in price for those materials which can be totally sourced from within the U.S. and those which much be imported to meet some or all of our local demand; for example, lumber and copper. 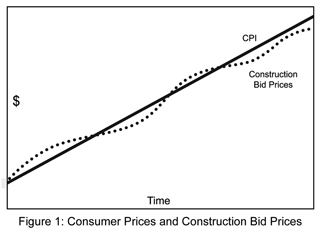 There is a disconnect between the change in price for those raw materials which are global commodities and those which are not.

Copper and oil, for example, are global commodities which have continued to go up in price even though the U.S. economy is in recession. The rising price of copper continues to impact the cost of wiring and major mechanical and electrical equipment while the price of oil has impacted PVC, asphalt and transportation costs.

Very low demand within the construction industry is inhibiting attempted price increases for many products, effectively creating a ceiling. While producers and suppliers have for some months sent out letters advising of price increases — think drywall, metal studs and rebar — many of these increases have not been sustainable.

At some point in the not-too-distant future, cost pressure will outweigh weak demand and price increases will stick.

The Great Recession severely affected the construction industry, leading to intense competition among contractors and subcontractors and to high unemployment rates across the industry, from construction workers to design professionals. This has continued to dampen bid prices despite ongoing increases in the overall cost of labor and materials.

At some point in the future, contractors and subcontractors are going to want to make profits again and, with recovering demand, will be able to start pushing their bid prices higher than the underlying rate of escalation of labor and materials.

Of course, there is a question as to whether the rebuilding of that part of Japan affected by the tsunami will have any impact on construction costs in the U.S. The most likely impact is that the greatly increased level of Japanese construction will add to the global demand for construction materials, which will increase world prices and have some limited flow-through to U.S. prices.

Looking at all these factors, it would seem that in 2011 bid price escalation will simply mirror labor and material price escalation, but from 2012 there will be catch up as the very slimmed down construction industry is finally able to go back to making money while trying to manage increasing demand with a much reduced workforce.