Stack removal was a tall task

Taking down four structurally compromised boiler stacks may not sound like a big deal, but when the stacks are close to power lines, combustible materials and occupied buildings, the job quickly becomes complex.

The stacks averaged about 130 feet tall above roof levels. Demolishing them for the Department of Defense required stringent planning and execution with regard to safety and engineering controls. In the end, the job was completed without a single safety incident, on budget, and with a debris diversion rate exceeding 95 percent.

The project started with collaboration among Nuprecon personnel and experts from KPFF Consulting Engineers, who determined the most effective means for taking down the stacks would be to use a series of custom-made, self-supporting crane “track” systems on which motorized scaffolding would run the height of the stacks. 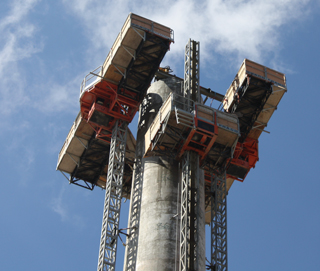 The first of these mobile scaffolding units secured a hydraulic remote-controlled Mini-Max machine, as well as personnel. The second provided an elevator-type solution for personnel to be raised and lowered along the vertical work surface. One notable requirement of this solution was that as work progressed, the main working platform could only move 6 feet downward before technicians needed to remove the now-unneeded upper portion of the track system.

The first two stacks, made out of rusting but reusable steel, were 60 and 85 feet tall. It was the structurally compromised state of these stacks that mandated an innovative solution, as their weakened state eliminated the possibility of confidently lowering them to the ground with a crane.

To further complicate the effort, both stacks were sandwiched between 13 active gas lines and a 10,000-gallon fuel tank feeding the base’s boiler plants and other infrastructure.

Crews methodically removed the two deteriorated structures by progressively cutting and lowering the steel sections into the stack itself — using it as a debris shaft. A hole was cut into the base of each stack for removal of the steel pieces. 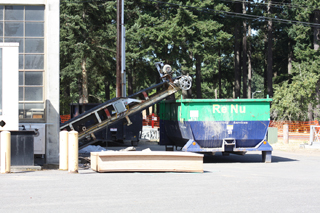 [enlarge]
Debris was fed out of a hole in the base of the concrete stacks, onto a conveyor belt, out of the building and into a recycling bin.

The final two stacks, made out of concrete that tapered in thickness from 16 inches at the base to 5 inches at the top, were 185 feet tall. While the removal of these stacks used a similar solution for systematically accessing the work surfaces from top to bottom, there were additional complexities.

First, due to their diameter and height, an additional vertical support track was required.

Second, as the volume of material generated during the demolition of the concrete stacks was much higher, a new solution was required for its safe handling. 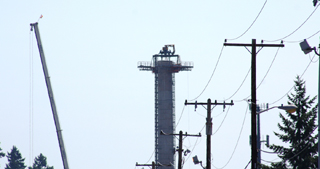 These measures enabled the expeditious, phased load-out of the debris; the bobcat loaded debris onto the conveyer, which carried the rubble up to ground level and into a recycle box for hauling.

In the end, there were 8,876 hours worked with no time-loss or recordable injuries.

Dr. Joan Warfield Blazucki specializes in communications design and has won a number of excellence awards. She has been involved with the demolition and remediation industry for more than 15 years. Eric Willig studied business at Westmont College and the University of California, San Diego. He has 20 years of leadership experience, nearly half of that handling development and marketing for demolition and other specialty contractors.