In late July, a van traveling south on Interstate 5 through Seattle kicked up a piece of a concrete panel and sent it flying through a driver’s windshield.

Earlier in July, a 24-inch-long pothole opened up on the I-5 Ship Canal Bridge in the middle of the afternoon rush hour. Washington State Department of Transportation maintenance crews closed lanes to patch the pothole and keep drivers safe — even though it was in the middle of the evening commute and backed up traffic for miles.

In October 2011, concrete panels started breaking apart so quickly on I-5 near Southcenter that the State Patrol had to close lanes. A contractor implemented an emergency fix while drivers navigated around a 14-hour, unplanned lane closure at one of the state’s busiest interchanges.

These unexpected emergencies frustrate WSDOT and drivers, impact our economy and are costly to fix. WSDOT engineers are concerned that these emergencies — concrete breaking apart or rebar popping up out of the highway without warning — will become the norm unless we have a long-term, sustainable investment plan for highway preservation and maintenance. 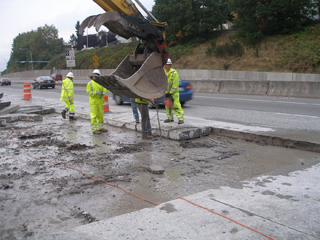 Photos courtesy of WSDOT [enlarge]
Twenty-two panels were replaced last fall on I-5 near Tukwila after crews noticed they were shifting under the weight of heavy vehicles.

How did we get here?

Fifty years ago, our state’s super-thick, super-durable Portland cement concrete was the pride of the nation. It still boasts remarkable strength and has lasted longer than concrete elsewhere. But now I-5 through King County is unraveling from the daily pounding of 230,000 cars, trucks, buses and superloads, and from 50 winters of freezing, thawing and studded tires.

WSDOT engineers inventory our highways every four years. Maintenance crews identify the highest-priority repair spots. They send pictures to track and rank the damage and plot repair strategies. If they can fix the potholes or cracks, they do. If they can’t, concrete-panel repair, rehabilitation or replacement becomes a construction project.

Some projects include 50 panels, some include 400, but all the panels being replaced are the worst of the worst. 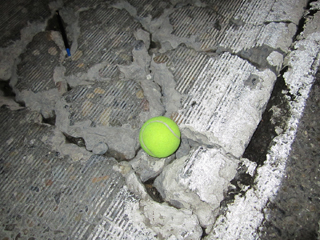 [enlarge]
Surface cracks on I-5 in the University District were so severe that a tennis ball could fit in them.

Much like triage in an emergency room, WSDOT is running triage in the heart of King County with a series of concrete-panel replacement and rehabilitation, concrete grinding and expansion-joint projects.

In 2009, a contractor replaced 440 concrete panels. The same contractor brought in huge pavement grinding machines to remove the ruts down 50 lane miles of I-5 through the downtown core. Drivers raved about the new, smoother pavement. Nearby residents even claimed the freeway was quieter. That’s what happens when you grind out wheel ruts.

This fall and next spring, the contractor will be back to grind three miles and replace 32 panels on I-5 in the University District and Kent. That’s Triage Two.

WSDOT just awarded a contract to replace 30 bridge expansion joints at the I-5/I-90 and West Seattle Bridge interchange. These joints allow for the natural contraction and expansion of concrete that occurs as temperature changes. After that, several smaller concrete projects will help tackle the worst spots on Interstate 405 in downtown Bellevue, state Route 518 near I-5, and state Route 99 by Spokane Street.

Between now and 2019, WSDOT has identified — and the Legislature has funded — nearly $130 million worth of concrete rehabilitation projects on state highways.

What’s not on the horizon yet is a plan to pay for what is really needed. A project to replace 30 expansion joints here and 400 concrete panels there is great start, but don’t forget that there are 350 concrete panels per lane per mile. WSDOT engineers want to replace all the concrete on I-5 in King County and the price tag is significant.

Members of Gov. Gregoire’s Connecting Washington Task Force see repairing I-5 as the best investment we can make. These construction projects go to contractors who hire local workers and use local materials. These jobs keep people employed here in Puget Sound. The money stays here and helps rebuild our economy. Plus, it avoids unexpected, unforeseen situations that create road jams and other problems that disrupt people’s lives.

Lorena Eng is the regional administrator of WSDOT’s Northwest Region. Her region covers the area from Pierce/King County line to the Canadian border.