The past decade brought plenty of light-rail construction, with the 2009 opening of Link light-rail service moving rapidly into constructing the University Link extension. The coming decade will give Sound Transit the opportunity to really show what it can do.

Between now and 2023, the agency will build up to 36 miles of light-rail extensions approved by voters in 2008 as part of the ST2 service expansion. This includes moving forward with five major light-rail projects while supporting the region’s economic recovery by creating more than 100,000 direct and indirect jobs.

Here’s a look at what’s under way and what’s in the pipeline: 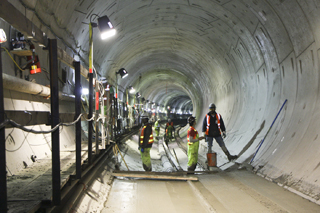 Images courtesy of Sound Transit [enlarge]
Workers pour a concrete slab in one of the University Link light-rail tunnels, which open in 2016.

Construction of the 3.2-mile underground University Link light-rail extension from downtown Seattle to Capitol Hill and the University of Washington continues moving forward on schedule to open in late 2016. Earlier this year contractors completed mining the twin tunnels and are working on the cross passages between the tunnels that are necessary for fire, life and safety protocols.

Station construction at the UW site adjacent to Husky Stadium is well under way and construction for the Capitol Hill Station is scheduled to begin next year. Power, control and communication systems contractors will start their work in the tunnels in 2014 as the last steps before final train testing.

Sound Transit broke ground earlier this summer on the 4.3-mile light-rail extension from the UW to Northgate. The $2.1 billion line is mostly underground and will include stations at Northgate Mall, the Roosevelt neighborhood and University District near the west side of the UW campus.

Site preparation work has begun at the Roosevelt and U District station sites, and the major station excavation and tunneling contract for the project should be out for bid in the second quarter of 2013 with that work getting under way in the fourth quarter of 2013. The station finish contractors are scheduled to begin work in 2016 and 2017. The line is scheduled to open in 2021.

Sound Transit will extend light rail 8.5 miles north from Northgate to Lynnwood with at-grade rail service mostly along the Interstate 5 corridor. The project team is completing the draft environmental impact statement, scheduled for publication in 2013. 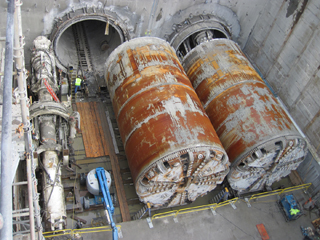 [enlarge]
Twin tunnel boring machines that mined the light-rail tunnels from the UW to Capitol Hill are being dismantled at the Capitol Hill Station site.

Preferred alternatives for the alignment and station locations are expected to be ready for preliminary engineering and a final EIS in the summer of 2013.

Construction is scheduled to begin in 2018 with the line opening in 2023.

The East Link extension will connect Seattle and the Eastside with light-rail service running across the Interstate 90 floating bridge to Bellevue and the Overlake neighborhood near the Microsoft campus. The line will include stations at I-90 and Rainier Avenue in Seattle, Mercer Island, south Bellevue, downtown Bellevue, Overlake Hospital, the Bel-Red neighborhood and Overlake.

East Link is in final design with special emphasis on engineering track connections for the floating bridge segment and final alignments through south and downtown Bellevue. Construction is scheduled to begin in 2015 and the line will open in 2023.

The South 200th Station will serve as the southern terminus for Link until the rail line extends farther south and will include a 700-space parking garage and up to 400 additional temporary parking spaces.

In September, the Sound Transit Board will be asked to approve the selection of a contractor to design and build the guideway, station, track work and systems. After contractor selection, major construction on the $383 million project will begin in late 2013.

Getting to Federal Way

Sound Transit has begun early planning and environmental work to extend mass transit 7.6 miles from South 200th Street in SeaTac to Federal Way, with stations in Kent/Des Moines near Highline Community College and in Federal Way near South 272nd and 320th streets. A public process beginning this fall will explore alignment options.

In the coming years the agency will continue working with local communities on options for addressing the major impacts of the national recession on funding for expanding mass transit. With an estimated 32 percent reduction to South King County’s revenues for delivering ST2 projects, current financial projections show sufficient Sound Transit revenues to reach Kent/Des Moines by 2023. The environmental work that is getting under way will establish a shovel-ready plan for extending light rail all the way south to the Federal Way Transit Center and help identify costs and options for getting there.

Sound Transit is also in the early stages of gathering public comment on possible options for expanding the Tacoma Link system that operates between the Tacoma Dome and Theater District stations.

The 16 miles of light rail that Sound Transit opened in 2009 between downtown Seattle and Sea-Tac International Airport gave our region its first taste of a long-anticipated mass transit rail system. Link has generated double-digit ridership growth every year, including a 12 percent jump in 2011 over 2010. The line currently carries about 28,000 riders every weekday and has become a hugely popular way for fans to get to Seattle Seahawks, Sounders and Mariners games.

Following the scheduled completion of the ST2 light-rail projects in 2023, Link ridership is projected to grow to more than 280,000 each weekday by 2030 as the Puget Sound region grows by more than 2 million people. Those 280,000 riders will enjoy fast, frequent and reliable service 20 hours a day. Each one of them will avoid experiencing and adding to rising congestion as the region’s population grows.

This is the future that our staff and those who work for our many public and private partners keep in our sights as we move these projects forward.