Other than being a few weeks early, there was nothing unusual about the flight. The plane took off from Germany and touched down in Japan.

But at 1 ton each, its 36 passengers were not your average air travelers — they were crates containing pieces of a massive circular bearing that will be placed at the center of the world’s largest-diameter tunneling machine. And their ultimate destination was not Japan but Seattle, where next summer the five-story-tall machine will begin digging the state Route 99 tunnel to replace the Alaskan Way Viaduct.

The bearing’s early arrival at the manufacturing plant in Japan didn’t make the papers, but for those of us privileged enough to work on this once-in-a-lifetime project, it was a noteworthy event. We now have in our possession the most important and complex part of the machine that will build the SR 99 tunnel and allow us to remove the viaduct from Seattle’s downtown waterfront. Without it, the machine’s front end wouldn’t rotate. No rotation, no away at the earth. No earth-scraping, no tunnel. No tunnel, no transformation of the SR 99 corridor.

With so much depending on it, it’s no wonder the bearing had no problem catching a ride from the airport to the warehouse where it’s now being stored.

Of course anyone who’s driven on the viaduct lately knows the transformation of the SR 99 corridor has already begun. Last fall we demolished the southern mile of the viaduct and opened a temporary section of highway that, with the exception of occasional weekend closures, will keep SR 99 traffic moving until the tunnel opens in late 2015. 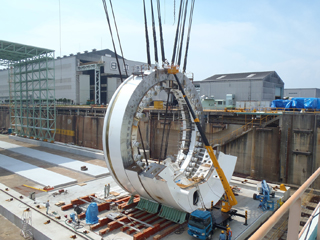 Photos courtesy of WSDOT [enlarge]
Japanese crews are half finished building the TBM that will bore the SR 99 tunnel in downtown Seattle. The machine will be disassembled for shipment and then reassembled in the construction area west of CenturyLink Field.

Less visible is the progress we’re making in Japan, where the tunnel-boring machine is nearly half built. There, crews have spent the past 10 months manufacturing its parts from scratch. The remainder of the year will be devoted to assembly and testing. In early 2013, the machine will be taken apart, shipped to Seattle in 41 pieces weighing up to 900 tons and reassembled to the west of CenturyLink Field, a few hundred feet to the south of the remaining section of the viaduct it will help replace.

The view from afar

It’s asking a lot of the average Seattleite to pay attention to a machine being manufactured 7,000 miles away. 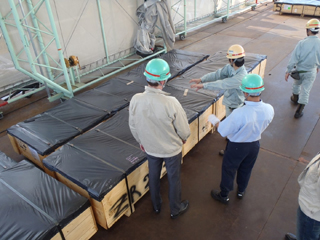 [enlarge]
The machine’s main bearing is being stored in crates in a Japanese warehouse. It will be assembled along with the rest of the machine by the end of the year.

To understand why it is being built in Japan, it helps to consider the immensity of the task at hand. At 57.5 feet in diameter and more than 300 feet long, the machine is roughly the same size as some of Washington State Ferries’ largest vessels. And while the world has seen its share of tunnel-boring machines, it has never seen one this big. Only a handful of facilities in the world are capable of such an undertaking. One of them is Hitachi Zosen Corp. in Japan, the firm that was selected for the job.

As construction of the tunnel-boring machine continues abroad, construction to replace the viaduct is boosting the local and regional economies. Seattle Tunnel Partners (STP), our contractor for the tunnel project, is a joint venture between Dragados USA and Tutor Perini Corp.

STP’s team includes several local firms, among them Frank Coluccio Construction and HNTB Corp. Eighty-five percent of STP’s subcontracts — including contractors, consultants and suppliers — are with firms in Washington. Local labor figures prominently into our efforts as well, with the viaduct replacement program sustaining more than 3,900 jobs at the height of construction.

Impressive as the tunnel-boring machine is, the hardest work is still ahead of us. After all, building cool machines isn’t our job. Our job is to dig a tunnel and remove the viaduct while protecting buildings and utilities, and keeping SR 99 traffic moving. It’s a complex challenge, one we take very seriously. 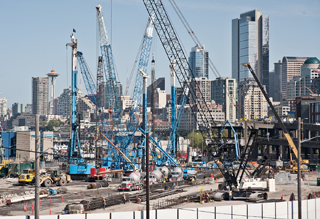 [enlarge]
Crews in Seattle are digging an 80-foot-deep pit where the five-story-tall TBM will begin digging the SR 99 tunnel next summer.

When tunneling begins next summer, the engineering world will be watching, and so will Washingtonians. Until then, our job is to continue preparing for the machine’s arrival.

We’ll try to have some fun along the way, too, by giving the public opportunities to learn about the incredible effort that will soon unfold beneath their feet. We recently unveiled a 10-foot-long motorized replica of the tunnel-boring machine at Milepost 31, our information center in Seattle’s Pioneer Square neighborhood. We also posted a series of informational signs on the fence to the west of the construction area near CenturyLink Field, to help passersby better understand the history that’s taking place in front of them.

Finally, later this year, as crews prepare to ship the tunnel-boring machine to Seattle, we’ll launch a public contest to choose its name. Like the process for naming a ship, the process for naming a tunnel-boring machine has traditionally been governed by superstition and convention. Some machines are named for the spouse of the project manager, others for people or landmarks of regional significance.

For now, our machine remains anonymous; its most important part packed away in 36 crates in a Japanese warehouse. Its journey to Seattle is still months away, but soon enough it will have a name and a face that includes a few hundred rotating teeth. We can’t wait to introduce it to the people of Washington.

Linea Laird is the state’s administrator for the Alaskan Way Viaduct Replacement Program. A 30-year veteran of the Washington State Department of Transportation, she oversees all aspects of the projects that will replace the viaduct, including the SR 99 tunnel project.