Colleges and universities are vying to attract students in a market where academics no longer rule as the single deciding factor in choosing where to earn a degree.

Today’s incoming students want a better quality of campus living compared with past generations, and it’s high on their list when choosing a school. Many colleges and universities are upgrading their housing facilities in response to rising enrollment numbers and to stay competitive. For the University of Washington, creating an enticing campus environment is key to continuing to attract top-level students.

An important part of this development program was the addition of new campus housing. For many years the university was not able to keep up with housing demands, forcing many incoming students to live off campus. After considering several studies highlighting the social and academic benefits of living on campus, UW initiated a plan to create an enriched four-year campus student experience.

The university’s master plan focused on housing that emphasized a sense of community and different identities for the North Campus and West Campus residence halls. 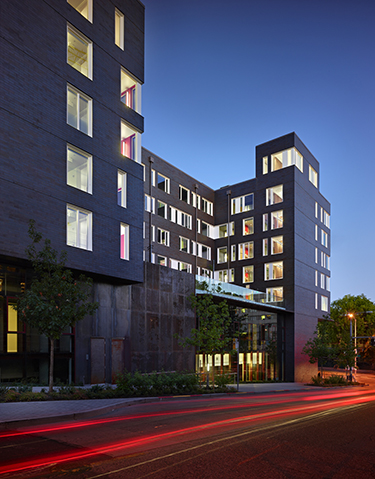 Photo courtesy of PAE [enlarge]
Four new West Campus dorms house a total of 1,600 students. This is Poplar Hall, which opened in 2011.

Directly reflecting their urban setting, the string of four buildings that make up the West residence halls mirror a trend in student housing. Rather than being traditional dormitories, the facilities were designed to be mixed-use and act as miniature neighborhoods.

The West residence halls were designed and constructed in two phases staggered by approximately six months, meaning all four buildings were in design and construction at once.

In the initial planning phases of the design and systems for this project, the PAE team of engineers faced challenges that typically accompany higher-education projects. The most considerable challenge was the need for highly efficient buildings at a low cost.

Because University of Washington will own the buildings for a long time, the systems and materials needed to be highly durable and efficient to keep costs and maintenance down — both initially and over time — while supporting optimal efficiency.

Given that sustainability and building efficiency were chief priorities, a key component was the building envelopes. PAE worked closely with the architects and general contractors to develop tight building envelopes designed to minimize air leakage and keep heating and cooling costs down.

Full-scale mock-ups of wall sections were constructed and blower-door tested to identify leaks. Adjustments to air barrier details were made accordingly.

This created an opportunity to identify leakage areas and make corrections that were applied throughout the envelope, avoiding the potential of repeating the problem multiple times during construction. The contractors understood PAE’s infiltration goals and the need to address these types of details and challenges prior to the start of construction.

PAE developed different heating and cooling systems to increase the overall efficiency of the buildings and minimize energy use. The cooling systems on the residential levels relied on single-sided natural ventilation, as opposed to a mechanical cooling system. For the heating system air source, heat pumps were utilized where practical.

Due to the superior building envelope, the residential heating needs were minimal. Electrical resistance heating was used due to its low upfront cost and minimal overall effect on annual heating costs.

PAE identified an opportunity for a heat-recovery system in the kitchen that harvested rejected heat from refrigerated food storage and display cabinets, and used it for heating purposes.

Indoor-air quality was a priority for the buildings. Poplar Hall utilizes a rooftop air-to-air heat exchanger, allowing fresh, filtered air to be delivered directly into the occupied residential units, while recovering the energy from the exhaust air to warm the outside air. The remaining three buildings use trickle vents in the wall of each room, allowing fresh air to be drawn directly into the units from outside.

A Seattle City Light incentive program helped fund a computer simulation for all four buildings. The analysis simulated a geometrically accurate building form, construction type, lighting and mechanical systems, and compared the proposed design to Seattle Energy Code. The predicated energy savings resulted in cash incentives of up to $350,000, and the buildings are expected to use 30 percent less energy than similar Seattle buildings.

Residential buildings contain a much higher percentage of bathroom fixtures and cold/hot water supply piping than typical buildings. Because corrosion or galvanic action is common with metal piping systems, PAE chose a potable water piping system that uses a chlorinated polyvinyl chloride (CPVC) plastic pipe, rather than the more commonly used (and less durable) copper or galvanized piping. PAE’s design called for high-efficiency water fixtures, resulting in an anticipated reduction of potable water use by over 30 percent compared with a standard design.

Higher-education projects require a unique set of considerations during the planning and designing phases. They demand an understanding of the importance of investing in the equipment, materials and systems necessary for creating a space that is both energy- and cost-efficient, while meeting the needs of students.

The UW’s West residence halls involved a collaborative team of highly skilled and innovative professionals. The construction team (Walsh Construction and W.G. Clark), Mahlum architects and UW created a wonderful vision — one PAE is proud to have been chosen to help bring to fruition.

Conrad Brown is a principal at PAE.