It isn’t news that architects, builders and engineers are constantly confronted by budget cuts, shorter time frames and the demand for innovation and excellence.

The team responsible for the recently completed $10.7 million renovation of the 165,000-square-foot University of Washington Odegaard Undergraduate Learning Center met those challenges, and more. Mortenson Construction and the Miller Hull Partnership collaborated to bring the 40-year-old structure into the 21st century on budget, and with just a 10-week summer closure for major demolition and new structural additions.

Reworking the 1970s-era building included revision of existing spaces, the addition of a large skylight and the demolition of a prominent central staircase. General contractor/construction manager delivery and an integrated design and construction process enabled Mortenson and Miller Hull to work on an incredibly short and prescribed timeline, and within a tight budget.

This type of integrated process, formalized through a collaboration agreement signed by the owner, designer and contractor, brought together the entire team right from the start, enabling them to plan and design a project schedule to suit the needs of the students in addition to streamlining final design, approvals, estimating and cost trending efforts, which could easily have taken more than a year. 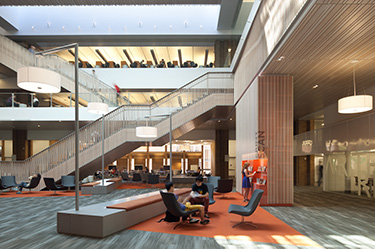 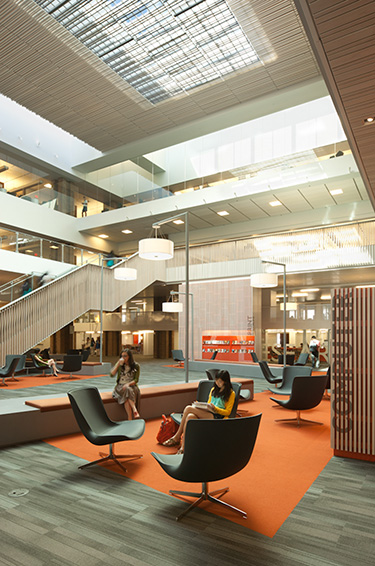 [enlarge]
The library’s newfound space was designed to be efficient and flexible. 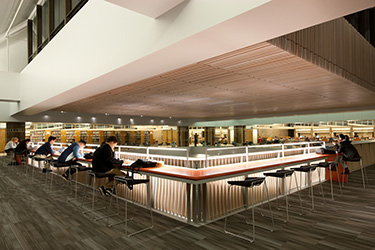 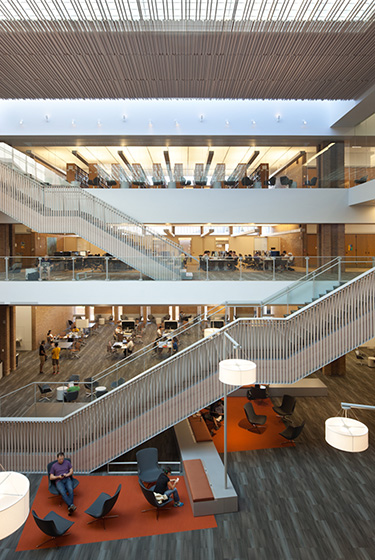 [enlarge]
Only 55.5 percent of the old Odegaard library was being used, according to a survey. The new design increases space use by 13 percent.

Mortenson used “pull” planning schedule techniques to implement a plan to minimize disruption for students and faculty throughout the construction process. During most days of the week, the library is one of the busiest buildings on campus, as it remains open for 24 hours and accommodates more than 10,000 visitors per day.

The only planned library closures were during the 2012 summer quarter and briefly during the 2012 holiday break. Construction milestones for bidding, design and review stemmed from the summer closure.

Mortenson completed major demolition and steel erection for the atrium staircase at this time, although the cafeteria below remained in use. For the duration of the project, Mortenson maintained a work schedule that avoided high-traffic hours.

The teams tracked and measured project data not typically seen on university projects. Design and construction efficiency was measured and reviewed by Campus Engineering and UW Technology departments on a weekly basis to ensure that the teams were meeting project goals. Mortenson and Miller Hull agreed to an “over the shoulder” review approach by university stakeholders and committed to a three-day response to requests for information.

This goal ensured the design reviews were addressed and resolved immediately, accelerating the project development schedule by months. Co-location on site of the contractor and architect also allowed for quick resolution of issues, as well as advice on constructibility and cost in the early development phase.

Integrating librarians and university stakeholders into the process enabled the teams to better understand the needs and vision of the 21st-century library. Historically, libraries such as Odegaard were compartmentalized to facilitate individual learning needs. An initial utilization survey found that only 55.5 percent of the building was being utilized.

Removal of the atrium staircase revealed an additional 6,000 square feet within the existing building. The existing space was designed to increase space efficiency and flexibility.

“The renovation of the Odegaard Undergraduate Library is as much about the astonishing transformation of space in an outmoded building as it is the re-imagining of the learning experience for students in the 21st century,” said Ruth Baleiko, lead design architect for Miller Hull.

“We enjoyed the challenge of finding and repurposing space within a building iconic of its era, while reinventing its functionality for a contemporary feel that keeps it fresh and forward-looking to meet the needs of today’s tech-savvy and socially minded students.”

Despite the additional technology features, energy costs are predicted to decrease by 51 percent. The skylight in the atrium increases natural light, which permeates the soundproof glass walls that enclose the atrium.

In this way, the project received a competitively bid mechanical scope, but was able to obtain coordinated shop drawings in the time it typically would have taken to receive just construction documents. This new approach enabled the Campus Engineering mechanical engineer to evaluate the system and its public works compliance at a much quicker rate than ever before.

The university was strategic in selecting its design and construction partners together before programming was even completed. By integrating the project delivery team early in the process, the team capitalized on the time to understand its customer’s business, and improve it through increased usable square footage and a higher-quality student experience.

The collaborative process enabled the team to complete the project in just under one year, while allowing students to continue to use the space for their studies. The renovated library is equipped to serve students in a more social and sustainable learning and study setting.

Recognizing the building is a notable piece of 1970s architecture designed by prominent Pacific Northwest architect Paul Hayden Kirk, the renovation respects the building’s shell while improving its functionality and internal spaces for a contemporary feel that keeps it fresh and relevant.

Rob Warnaca is design phase executive for Mortenson Construction, a national general contractor with a local office in Kirkland.