The successful design and construction of the project had its challenges, including varying ground conditions and possible constraints near the surface.

The success of the tunneling work was set up through Sound Transit’s robust subsurface exploration program that was completed in three phases between 2002 and 2008 and included more than 140 borings.

Two critical areas of geotechnical design were the undercrossing of the Montlake Cut and of Interstate 5 near downtown. In both of these areas, the twin bored tunnels passed beneath existing facilities with less than one tunnel diameter of ground cover. 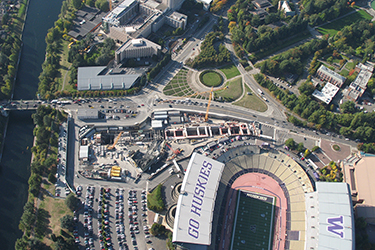 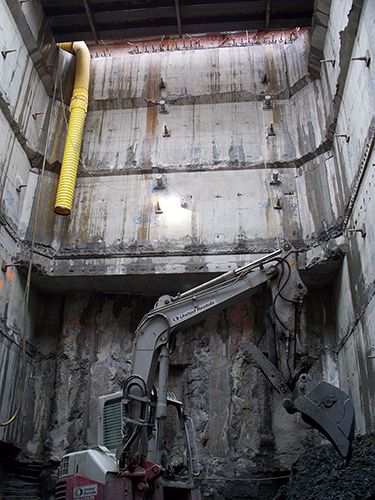 [enlarge]
This is one of four large pits that were dug to gain access to existing pile walls on I-5. Crews cut holes into the piles for the tunnel.

Understanding the local ground conditions in these critical areas was essential for the safety of the tunnel construction due to their shallow depth. In addition, the original construction of I-5 and Montlake Cut presented a possibility of structures left behind (which may get in the way of tunnels), so additional work was done to understand the complete picture at each location.

The U230 contract took on the challenge of tunneling beneath I-5 near downtown.

The initial I-5 corridor through Seattle was constructed in the 1960s. In the vicinity of the tunnel drives, the freeway is supported on the east side by an approximately 35-foot-high wall cut supported by a piled cylinder retaining wall. Three additional piled retaining walls are in this area to support the lower express lanes as well as the west wall.

Early in the development of the University Link tunnel design, it had been proposed that the solution to tunneling through the I-5 retaining wall structures was to excavate four large pits to provide access to the existing cylinder pile walls used to retain the I-5 cut slopes and to cut holes through them for the tunnels to be driven through.

These pits were to be excavated entirely within the I-5 on- and off-ramps at the Olive Street interchange, so resolving and maintaining traffic flow through this very busy corridor became a challenge.

The real issue for the tunnel work was to complete the pit excavations and remove necessary portions of the cylinder walls without compromising the structural integrity of the wall system and to keep I-5 operational.

The design solution was no small feat and involved close coordination between Sound Transit, the design team and WSDOT. The result was a construction sequence to expose and remove the sections of the walls in conflict with the tunnels, including detailed traffic management and a continuous monitoring network to alert the team in real time regarding any excessive movement.

It was realized as the U230 tunnel design commenced that the I-5 preparation work must be ready well in advance of tunnel construction getting to the I-5 crossing to eliminate any construction delays. To assure this, the work was built in a smaller contract, U215, which allowed it to begin prior to the tunnel work and to be bid by a contractor that focused on pit excavation. This led to enhanced competition and reduced total cost.

Through an evaluation process and working as a team, the issue was resolved and a new approach was developed that included installation of additional supports, additional strengthening of the cylinder pile walls and increased monitoring of the wall. Hold points were also implemented to check the performance before allowing the work phases to proceed.

The collaborative effort proved successful and the project was completed on time without further significant delay. 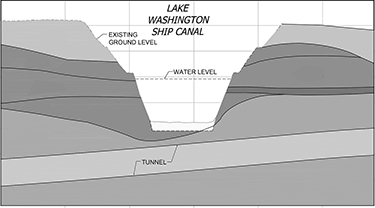 [enlarge]
The tunnel’s top is just 13 feet from the bottom of Montlake Cut.

The design of the U220 tunnels took on the challenge of balancing the cover needed to pass safely beneath the Montlake Cut. Added to this was the consideration that with each foot of cover reduction under the Montlake Cut there was a direct savings in cost and schedule for the University of Washington Station excavation as it became shallower.

The twin tunnels driven south from the UW Station excavation pass under the Montlake Cut ship canal with approximately 13 feet of cover from the mudline to the crown of the tunnel. Early in the design the depth of cover over the tunnel was closer to 20-25 feet.

Initial stability analyses, based on the results of the geotechnical investigations, showed that the side slopes of the Montlake Cut would remain stable if the alignment was raised. Tunnel buoyancy was evaluated and shown not to be an issue for the raised alignment. However, the higher the alignment was raised, the more potential of hitting obstructions in the area increased due to previous construction in the area.

The Montlake Cut ship canal was originally constructed in the 1910s to connect Lake Union and Lake Washington. A series of slope stability projects were carried out between the 1920s and 1980s to stop sloughing and erosion of the excavated slopes.

These projects installed soldier piles and sheet piles that were left in place. The piles, if located in the path of the tunnels, would cause problems for the tunnel boring machines.

During final design, all available historical documents were reviewed for these types of obstructions along the alignment to validate the raising of the alignment. Based on this information, along with the test results from borings drilled from a barge in the Montlake Cut, it was determined that the alignment could be raised roughly 10 feet. This raise, in turn, allowed UW Station to be raised an equal amount, realizing considerable project savings.

Although the raised alignment was technically feasible, rigorous construction measures were also needed and were included in the contract documents. A hold point was added to the contract and the tunnel contractor was required to complete pre-undercrossing checks of all tunnel data to validate tunnel boring machine performance prior to advancing under the Montlake Cut.

A readiness review meeting of the team was also held to bring all parties together to communicate the status of the operation and the plan for tunneling under Montlake Cut. The result of the collaborative approach was two tunnels successfully driven beneath Montlake Cut without incident.

The design and construction of the U Link tunnels presented several unique and interesting challenges for Sound Transit, WSDOT, the design team and the tunnel contractors. By drawing on the extensive knowledge and experience of these parties, these challenges were successfully managed, which significantly contributed to the opening of the U Link line ahead of schedule and under budget.