Linking Capitol Hill to downtown and the UW 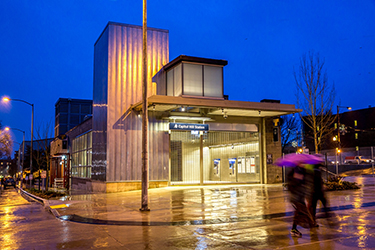 Capitol Hill Station serves the busy Broadway area near Seattle Central College. It connects to University of Washington Station to the north and the Downtown Seattle Transit Tunnel to the west.

The $105 million station was built by Turner Construction under a general contractor/construction manager contract. It has art installations “Jet Kiss” by Mike Ross and “Walking Fingers” and “Crossed Pinkies” by Ellen Forney.

A 163-foot-long pedestrian tunnel below Broadway Avenue helps people safely cross the street and get to the new station’s mezzanine level. Light rail riders take an elevator or escalator down 80 feet to the train platform.

Capitol Hill Station houses most of the support machinery for the power, communication and ventilation of the tunnels.

Construction of the station involved 3.5-foot-thick exterior walls, reinforced concrete strut members spanning the width of the station that were just over 3 feet and 5.5 feet in diameter, and suspended slabs up to 4 feet thick.

To create the station box, crews used an out-of-the-box concrete forming system with collapsible steel trusses that spanned the 45-foot width of the station box.

Hewitt was the architect.